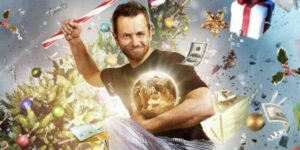 It’s no secret that, on both the mainstream and independent circuit of film, Christian cinema has been a big focus in 2014. Films like Heaven is for Real, Noah, Son of God, and next month’s Exodus: Gods and Kings have all catered to the faithful in some way and have gone on to achieve uniformly strong financial numbers as well. The independent circuit has seen big hits like God’s Not Dead and marginal successes like Left Behind, Mom’s Night Out, Persecuted, and When the Game Stands Tall, all of which finding ways to connect with their target audience in at least recognizing their faith in the cinema, a place where it’s fair to believe the religious demographic has felt ignored. Former Television star and devout, outspoken Christian, Kirk Cameron, has now thrown his hat in the ring, latching on to this newfound trend, and effectively making not only the worst film of its genre but the worst film of 2014.

Kirk Cameron’s Saving Christmas is a disjointed mess, structurally pathetic and morally bankrupt as we watch scenes interwoven with little coherency, dialog written and delivered in its most wooden form, and wonderful morals to teach our children, like “materialism is good.” The film begins with Cameron sitting in a blatantly artificial living room, decorated with more Christmas lights and flair than Macy’s after Thanksgiving passes, giving us an introduction to the film at hand. He states the biggest problem with the Christmas season is the “people” who want to segregate the spread of faith and good cheer to the private homes of those who celebrate the holiday or simply want the holiday done away with all together. He rambles on for about three minutes as the introduction sets the perfect theme for this film; it’s a circumventing project that never results in a specific or thoughtfully-articulated point.

We cut to a Christmas party held by Cameron’s sister, where a Santa has been hired, the tree has been erected, the house has been decorated, a feast has been prepared, and everyone is in an incorruptibly cheery mood; everyone except Cameron’s brother-in-law Christian (director Darren Doane), who is seen moping around the house before quietly slipping away to his car. Kirk follows Christian and learns the materialism of Christmas bothers him immensely, as he watches kids beg for toys they won’t play with in three weeks and parents max out their credit cards, giving way to the materials and the illuminating tree in the center of the room, and all while neglecting the baby Jesus in the manger, who is the ultimate “reason for the season.”

Cameron begins to initiate flashbacks to biblical times to “justify” why we have the Christmas traditions that we do. However, it’s not enough that we get a history lesson told from the enormously biased lens of Cameron, but in a dodgy and muddled manner. Cameron gets absorbed in the significance of baby Jesus’s swaddling cloth and the original mean-spirited roots of Saint Nicholas (something that will undoubtedly scare and confuse children), never addressing Christian’s true distaste for the holiday season. Kirk meanders for about forty minutes, talking himself in incoherent and redundant circles, never addressing Christian’s questions in a way that we can extract counterpoints or citing Christmas’s Pagan and cultist roots (if you’re going to show Saint Nicholas as a brute, at least address the backstory).

Interjected in these ridiculously dry biblical flashbacks and in-car dialogs, are exaggerated characters masquerading as likable people with personalities drawn so wide they are desperately unfunny. We see two party guests discuss “The War on Christmas,” relating it to several other conspiracy theories that just feels like a soundoff of paranoia. We get a few minutes of dead-end, annoying conversation and some of the worst displays of acting this year before it’s back to the car for a half-assed lecture.

Saving Christmas ends with an abhorrent dance number to an incorrigible techno/rap hybrid, with members of the cast obnoxiously dancing and doing slow-motion choreography together. We end things with a perfunctory voiceover with Cameron before we’re greeted by almost ten minutes of closing credits showing bloopers, outtakes, and a barrage of other things padding this project to just barely being feature-length (eighty minutes). If my plot synopsis sounds like it has not made any sense, then I have effectively lived up to the structure and the narrative pace of this particular film.

Just by comparing the full-length film to its trailer, you can tell Saving Christmas was Cameron’s last minute idea to cash in on the Christian cinema craze of the year. The trailer for the film talks about how Christmas has been corrupted by materialism and the political correctness of the holiday. However, Cameron blatantly contradicts his thesis when he states during the closing monologue that “materialism is good” because Christmas is about “God taking possession of a material body.” Aside from ushering in a pathetic excuse for a moral at the end of a film about Christmas, the cardinal sins committed here run amok: a sloppy narrative hodgepodge of biblical flashbacks, inept lecturing, and pointless filler clearly padding a small runtime, atrocious acting on all fronts, a desperate attempt at “staying hip” and keeping the attention of the audience by throwing in a hip-hop dance number, contemptible morals, and failure to address or even stick to a cogent thesis. Kirk Cameron and company should be required to volunteer at local charities or help cater several breakfasts with Santa to make up for such a yuletide atrocity.