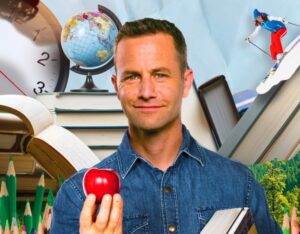 I’d like to meet the parents who, after the last two hellish years coupled with on-and-off again lockdown restrictions, would dare embrace the idea of having their child(ren) spend more time at home.

All joking aside, you need not have to dig too deeply to realize the many benefits that come with homeschooling your child. But if you’re new to the idea, or even considering it, you’re not likely going to emerge from Kirk Cameron Presents: The Homeschool Awakening enlightened. This documentary is 90 minutes of Kirk Cameron’s wealthy friends singing the praises of homeschooling, never fathoming that the majority of working American households could never dream of pulling off such a tall order while keeping the lights on.

Unlike Saving Christmas — which was made notable because it managed to secure a spot on IMDb’s “Bottom 100 Films” list a month into its theatrical release — Cameron spares us the atrocious dramatizations and contrived framework that made that film such an unmitigated disaster. Aside from this film’s awkward introduction, this is mostly a talking head documentary. The Homeschool Awakening follows over a dozen families — some with one child and some with up to eight — who have ditched public education in favor of a home-learning model. Parents discuss everything from how there is no “one size fits all” model to education to the fact that homeschooling allows them to teach good ol’ Christian values that are not part of public school curriculum (for good reason, but that’s an argument we’re still having 50+ years later).

The first problem is The Homeschool Awakening features too many interchangeable families, to the point where any kind of humanization is not only lost but hopeless. It would’ve been wiser to juggle three or four and get a deep examination of parents’ processes with teaching their children. The main frustration, however, is how generalized this whole production is. I could almost believe some of these families — with their impeccably clean households, gorgeous furniture, and flawless skin — were actors.

There’s one young SoCal couple with two children who embody the farcical nature of HGTV house renovation shows. You know the type: the man is a stay-at-home-husband and the woman catches butterflies for a living, yet they inexplicably have a $1.8 million budget for their dream home. You have to wonder if the production crew threw some money at a pair of Instagram influencers and told them to “play house” for a day.

The families make homeschooling sound so easy. One couple with two kids claims they both work only about 20 hours each a week. How are they affording rent, electric, gas, two children, and other expenditures on such paltry income? I started believing half of the interviewees had to be trust-fund babies or are living off inheritances. The fact of the matter is that for the majority of American parents who need to be in dual-income households to afford their lifestyles, the prospect of dropping a full-time salary in order to become their child’s teacher is not remotely feasible.

One can lament public school’s shortcomings — and there are many — until they’re blue-in-the-face, but it remains the overwhelmingly popular option because it’s the most pragmatic one.

However, you can’t tell that to anybody in this maudlin documentary, which plays like a pamphlet on homeschool come to life. Its aggressively beautified visuals — accentuated by angelic sunlight, manicured homes, and the coziest of suburban neighborhoods — make everything appear artificial. Blessed so, Cameron isn’t as ubiquitous as you might think. He turns up on occasion to awkwardly interview his wife, sometimes treating her like a total stranger, and wax poetic about the National Monument to the Forefathers.

I have to respect Cameron and The Homeschool Awakening for not creating a false narrative about homeschooling in America being under attack by the liberal elites, as suggested in a certain repugnant sequel to a Christian film franchise last year. But in a lot of ways, this film resembles Meet the Mormons, another similarly grating documentary that tried to humanize Mormons but instead came across an infomercial for the Latter-day Saints.

The only people likely to see this already homeschool their kids, and they really want to feel good about themselves for making that choice.

NOTE: Kirk Cameron Presents: The Homeschool Awakening is part of a two-night only Fathom Event at AMC Theaters on June 13th and 14th. Presumably, a VOD release will follow suit later in the year.