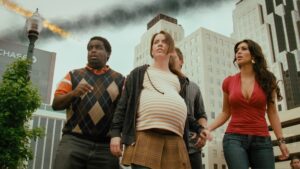 I’ve graduated from my boyhood years, where I spent many a night waxing vitriolic on internet message boards about the writing/directing team of Jason Friedberg and Aaron Seltzer. The very thought that a duo could be making (Date)-Movie-after-(Epic)-Movie used to incense me to my core. Times have changed. The conventional spoof movie is all-but-dead, replaced by more deftly written stylistic parodies and movies built on ribbing their own existence.

It’s one of the most ludicrous yet dangerously believable internet theories to which I subscribe. The same two or three photos of the alleged Friedberg and Seltzer are the same two or three photos that circulated back when Meet the Spartans was released. The two have never given on-camera interviews in their entire career. If anything, “Friedberg” and “Seltzer” are fake names for stand-in producers a part of a much-larger behind-the-scenes charade. One enjoyable Reddit thread has several opining that Stephen Soderbergh is behind the aliases and the resulting litany of bad parody movies that graced theater screens in the late aughts.

I’m not saying I wholeheartedly believe that particular theory. But I believe it more than I believe Friedberg and Seltzer actually exist. After all, seltzer is the name of a soda and note the “berg” in Jason’s name.

So, dear reader, you might be asking yourself why I even bothered to pick up a copy of Disaster Movie in 2022 and review it? I have my reasons. For one, watching the latest Kirk Cameron documentary reminded me that his film, Saving Christmas, lives on the infamous “Bottom 100” movie list on IMDb. Number one? Disaster Movie. Seeing that, and then revisiting my outlandishly possible theory, I had to double-back and at least check this box.

If you haven’t seen it or any other Friedberg/Seltzer work, you can rest assured that Disaster Movie is just as dismal as the rest of them. Predicated upon an onslaught of cameos, hamfisted references to pop culture icons (of the time), horrible impersonations of popular film characters, and some of the most ferociously bad writing this side of an Ed Wood film, Disaster Movie attempts to lampoon every remotely relevant piece of media from 2006 to 2008. Iron Man, Hulk, Hancock, and the Batman all make appearances. Justin Timberlake, Amy Winehouse, and Michael Jackson are all the targets of obnoxiously low cheap-shots. And even the “unrated” version of the film concludes with a cringe-inducing musical number revolving around the never-funny quip about “fucking Matt Damon.”

Fun fact: in the theatrical, PG-13 version of the film, the musical finale had the song sanitized to “I’m Dating Matt Damon.” In my opinion, that makes the original cut of the film worse, but why compare rotten eggs, at this point?

I can’t lie the film did manage two faint chuckles out of me, which was two more than I was expecting of a film that’s merited a 1.9/10 rating on IMDb. The introduction of Crista Flanagan’s Juney character (a parody of Juno) where she’s singing acoustic alongside Kirkland Signature Michael Cera was worthy of one. The other was during a Family Guy-esque cutaway parodying the incessant commercials for the topical ointment “HeadOn.” But I confess, by the end of Disaster Movie, I was ready to enlist in the help of a more beneficial substance.

There is no lasting merit nor memory of Disaster Movie. Like Friedberg and Seltzer themselves, it’s faded into obscurity, #1 only on lists that have “worst” or “bottom” in the title. The alleged writing/directing team haven’t been involved with a movie since 2015, and multiple projects they’ve announced have fallen through the cracks. Coincidence Steven Soderbergh has never been more active, and the duo rose to prominence when he “retired?” I think not.