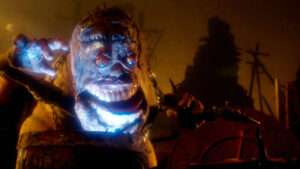 Phil Tippett’s Mad God is probably the closest thing we’ll see to an adaptation of the beautifully miserable Gary Numan song “Down in the Park.” When I make a reference that niche, you know a movie got me in a mood.

Technically a song by the short-lived Numan-led band Tubeway Army, “Down in the Park” tells the story of a future where “Machmen” (machines) rape and kill humans as a form of entertainment for robotic, numerically named spectators. Released in 1979, the song couldn’t be more divorced from the world of disco and rock; completely out of place, but destined to be loved for its ominousness, lyrical specificity, and unforgettable synthesizers.

During the first 20-or-so minutes of Mad God, I kept thinking about one of Numan’s lines in the song. “The machines are playing kill by numbers” kept entering my mind as I watched dozens of small, pint-sized figures squashed, incinerated, and dismembered by the forces of their inescapable hell. 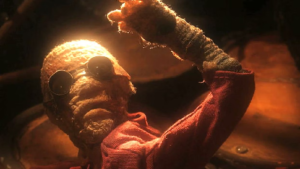 A bit of background: Mad God is a film 30 years in the making, from Oscar and Emmy-winning visual effects supervisor Phil Tippett. Tippett’s work has appeared in the original Star Wars trilogy, Jurassic Park, and Dinosaur!, just to name a few. What began as a passion project in the 1990s quickly fell to pieces due to stop-motion animation fading in popularity and the expensiveness of the project. It was thanks to generous donators via Kickstarter that the 83-minute long Mad God finally sees the light of day, three decades later.

Whether it was the strenuous animation process, the labor of erecting such elaborate sets, or the unflinching darkness that encroaches the film’s plot that led Tippett to having a mental breakdown during production, who can say? He suffered and fought mightily to get Mad God made, and at the very least he demands respect.

The film is less plot-driven; more a collection of asides that exist in a world where black smoke shrouds the sky and rampant industrialization literally steamrolls over its own assemblers and other innocent souls who unfortunately live in this world. There are a few characters we follow, however: an assassin, a surgeon, an alchemist, and “the Last Human” (British punk filmmaker Alex Cox).

This corrosive and sometimes disgusting picture is about a city in ruins. One that needs to perish, but simply is too stubborn to commit to it. Instead, it’s like a snake eating itself; destined to persist despite providing no conceivable benefit for anyone. The assassin is the de facto main character. He’s a soldier who wears a gas mask and an iron-clad suit, guided only by a treasure map that is disintegrating before his eyes. He must avoid grotesque monsters, literal hell-holes in the ground, and even being taken for consumption.

Another thread revolves around a surgeon and a nurse, who we see gutting a creature in a hospital in order to preserve its mutant baby. Interstitial moments away from these characters show a legion of other faceless, identity-robbed bipeds either become the victim of machinery, suicide, monsters, or an honest accident. There’s no dialog. This is a society eating itself to death and we’re left with a few scavengers who don’t have anything left to say. We wonder why they even want to survive in the first place. 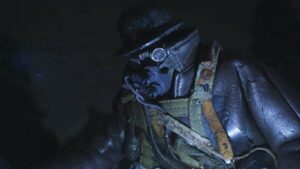 Tippett’s cacophony of savage cruelty is conveyed in beautifully ugly fashion thanks to the wonder that is stop-motion animation. He blends various styles, including steampunk and Fritz Lang’s Metropolis, to delightful effect. This is nothing short of a technical achievement 30 years in the making; an inevitable cult following and subsequent midnight showings await.

The lack of a strong narrative does inadvertently encourage the mind to wander. Mad God is so damn despondent and bleak that it’s liable to alienate, myself admittedly. The themes are somewhat elusive as well. Without strong characterization and little in the way of a narrative, we’re left to admire the style while debate the meaning — which is especially difficult when there’s no starting point.

But the Stygian landscapes and macabre undertones crossbred with involved stop-motion work, all tied together by an accomplished, ambitious man of his medium, renders Mad God more than an oddity — it’s an achievement.