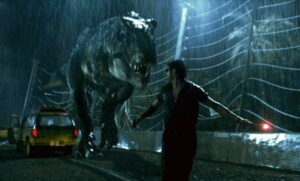 Steven Spielberg’s original Jurassic Park is one of the five films I can think of that really showed American audiences the capabilities of special effects and the sheer realism of such effects (Tron, Star Wars, Avatar, and Gravity are my other case examples). The film shows creatures, better yet, a world, that I’m sure most kids fantasized about exploring when they were young come to life in a way that balances the mystique, the adventure, and the peril all in one collective package. There’s no need to give dinosaurs voices or two-dimensional personalities; seeing them come to life and enthrall is all that we needed.

The story revolves around a company known as InGen, run by billionaire CEO John Hammond (Richard Attenborough), who decides to allow four individuals, in addition to his two grandchildren, into a theme park he has created, housing living dinosaurs. What unfolds, however, is a catastrophic miscalculation, with dinosaurs running amok and people’s lives being put in danger. Dennis Nedry (the always likable Wayne Knight) is the park’s architect and computer engineer, who works to make sure that all goes well with the park, despite the outcome.

On top of being a love letter to our childhood dreams of being immersed in a world of real life dinosaurs, Jurassic Park really formulates what a summer blockbuster is – realistic special effects, a team of rather likable actors shuffled in the mix, and a grandiose platform on which to play. Jurassic Park‘s main asset, however, despite its beautiful effects, is the sense of danger it conjures up. Ultimately, while still exercising the principles of science-fiction, the film plays like a horror film at times with its suspense and buildup. Consider the scene when Hammond’s grandchildren are hiding from a gigantic Tyrannosaurus Rex, as the dinosaur careens over where they sit, lurching over them like an engulfing shadow.

The intensity Spielberg and company conjure up is akin to the kind of slowburn buildup Spielberg worked to predicate Poltergeist off of several years earlier. There’s a liberal amount of time that allows for a setting to be created, characters to be introduced, and a sense of danger to build. After the first hour or so, the film goes from a rather calm and collective drama concerning the erection of Jurassic Park to a full-blown, high-octane adventure revolving around our wildest imagination.

While Jurassic Park is a winning spectacle of special effects and danger, it still falls prey, however, to the typical pitfalls of being a summer blockbuster. As somewhat expected, character development is sparse, as the characters before us (with the exception of Knight’s Nedry) speak with the kind of technical jargon that makes them less characters running a park and more vessels to advance the plot. Being that there’s little in the way of development for these souls also means it’s hard to truly feel anything for them when they’re put in danger, the primary reason we should be so invested in the peril on screen. In addition, there is also a lack of the exploration of the “man playing God” that is usually instilled in these films. Hammond has great potential to be the anti-hero here, working against popular opinion or science to develop real-life dinosaurs, ignoring all opinions and simply going for what he feels is right rather than what others see as morally right.

But perhaps I’m turning Jurassic Park, a film firmly stitched into the fabric of American cinema, into something it was never meant to be. One of the biggest gripes I get as a film critic is the assertion that I can never take films at face value or pieces of entertainment. The entertainment provided in Jurassic Park is sufficient enough to warrant a recommendation, and the film has already transcended the impact of a summer blockbuster. Maybe I’m wrong, maybe I’m right; maybe in the end, it’s for the dinosaurs.