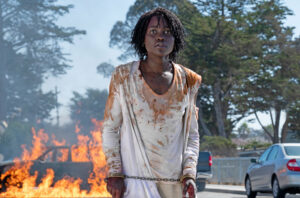 There was a reason that when Jordan Peele was announced as the new host/presenter of the reboot of The Twilight Zone there was no collective surprise amongst even the most opinionated horror fans. That’s because, by and large, people were confident in Peele’s ability to routinely write and collaborate on a variety of thrilling shorts with big social statements and humanity. Even though Peele was comparably inexperienced, having only directed one, albeit very great, film, there was praise and adulation en masse for the 40-year-old funnyman-turned-filmmaker, deservedly so. With The Twilight Zone set to premiere next month, that left his sophomore effort Us as a potential cog in the wheel. If it was great, bring on the series and let’s have fun dissecting many episodes. If it was not, well, we were quick to jump the gun, weren’t we?

I’m proud to be the bearer of good news: Jordan Peele’s Us is an intriguing, contemplative, and often terrifying film from a man who has just catapulted himself near the top of new directors to monitor (not just watch). While there is ample evidence of a filmmaker a bit overwhelmed with being anointed the lofty responsibility of making compelling thrillers with big statements, Us suggests we look outward far more than we look inward when it comes to confronting demons in the world. Good vibrations be damned; this is serious stuff, and frays aside, this is can’t-miss, crafty stuff. The kind of picture that prompts a great discussion afterwards, even if you see it alone. 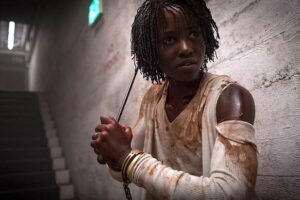 The plot: the less you know about Us going into it, the better, and I’ll do my best to keep things pithy. The film revolves around a family, led by Adelaide (Lupita Nyong’o) and her husband Gabe (Winston Duke), and their young children, Zora (Shahadi Wright Joseph) and Jason (Evan Alex). After a harrowing opening sequence, we see the family head to their vacation home in Santa Cruz. We can tell Adelaide is the attentive one of the family, while Gabe specializes in “dad jokes” and the children are their typical, rambunctious selves. Zora likes to spend time on her phone, while Jason doesn’t speak much, disguising himself in a Chewbacca mask while amusing himself with a lighter. As a young girl, Adelaide went through a traumatic experience in a house of mirrors, where she saw someone who looked identical to her, and although she has ostensibly put that experience behind her, one evening, she notices a family on her driveway that looks identical to her own. The family looks and moves almost identically to hers; only their voices are noticeably different. What we then see is a family combating these unknown forces that have intruded on their simple domesticity, whether by blunt force, cooperation, or the difficult process of understanding their true motivations.

I’ll always embrace a horror film that’s both wickedly original and deeply thematic, even if I make no quibbles insofar that I don’t fully understand the broad-reaching implications of the entire project, and Us is the whole package in that regard. From the opening moments, Us finds a way to grab you, roping you in slowly but surely when it comes to its tricky story, that encourages you to think and process its meticulous movements as it goes on. In terms of performances, Nyong’o and Duke anchor a film where the premise around them could easily swallow them whole. Whether we’re watching her breathlessly try to bring her family to safety or observe her doppelgänger explain her motivations in a croaky, unsettling voice, Nyong’o, in particular, unnervingly invests us emotionally. There’s something truly remarkable about how she can reel us in, regardless of whether or not she’s playing the protagonist or antagonist.

Us is a movie about a lot of things, but it explicitly concerns our fear of outside invaders. The fear of the unknown penetrates this picture. The impeding feeling that someone is out to harm us creeps in like an intrusive fog in the distant wind, and it’s one that Peele capitalizes on for much of the film. This is where Peele finds himself at home, once again, with bringing the disturbing reality of the modern world into his project. We are so often concerned with someone — be it a group of people or a particular, villainous individual — infiltrating our lives, when in reality, we all have a lot of traits, shortcomings, and human flaws we are not ever acting urgently enough to address. By focusing on Adelaide, Peele observes our own unwillingness to come to grips with our upbringings, and push forward without ever contemplating how a particular instance could’ve left us scarred or damaged in a potentially irreparable way. Seeing ourselves as the enemy is one of the hardest things we can do, and the fact that the enemy of Us consists of individuals who are “evil versions,” for lack of a better term, of those we are groomed to follow throughout the film, makes such a notion that inescapable.

Us, as a movie, plays up that duality right down to its structure. At times, it’s a film reliant on jump-scares and chuckle-inducing humor we find in many horror films; self-aware little asides that are tailor-made to take us out of the present situation. At others, it’s a film that predicates itself on complicated, multilayered drama that comments on present-day society. Peele interweaves it so well that we’re sometimes confused as to what he’s trying to say. But we feel the lingering, disorienting commentary throughout, and that alone is worth a lot when it comes to trying to come to grips with what Us is trying to do.

Consider its inclusion of “Hands Across America,” a mid-1980s, feel-good act of civil disobedience that involved people of all backgrounds coming together, linking their hands in unison, and retaliating against hate and negativity in the world. It wasn’t all too different from those presently on the internet, hellbent on unity, rising up against a controversial cabinet with whom many do not agree. If nothing else, it shows Peele’s preoccupation with commercialism and shallow messaging. Don’t you recall Get Out‘s use of the United Negro College Fund’s (revisionist) slogan of how “a mind is a terrible thing to waste?” Peele clearly watched a lot of TV as a child, and it left an impact of how he sees the world today. I can relate. The fact that he spins the naked optimism of the Hands Across America movement as something negative and potentially detrimental to the greater cause of unity says a lot about how shallow and narrow-minded our efforts are as people within a strict capitalist system.

There is also the ubiquitous presence of rabbits and the particular Bible verse, “Jeremiah 11:11,” within the film as well. Digest it how you want. Jeremiah 11:11 says, “Therefore this is what the Lord says: ‘I will bring on them a disaster they cannot escape. Although they cry out to me, I will not listen to them.'” It indicates a presence of false ideology within the culture, such as how a quaint, well-off family, led by well-known comic actor Tim Heidecker (Tim and Eric Awesome Show, Great Job) and Elizabeth Moss (Queen of Earth), relies on a voice-activated, electronic device similar to Alexa to guide them through their own existence, whether it’s scheduling events or playing music at their beckoning call. Maybe the answers are around us and we’re just too ignorant to recognize them. I had a lot of fun piecing it all together, and even then, I still feel ill-equipped.

What I’m getting at is that Us is stuffed with symbolism, commentary, and uneasy observations about our current existence. Peele leaves us with more questions than answers, something he didn’t do with his amazing directorial debut, but that’s as far as I’ll go in connecting the two films. A film that’s bloated and maybe overreaching with its themes is still better than one that’s too slight and underdeveloped. What we have in Us is a film that posits an American family arrested by their own worst nightmare in themselves. To say the least, it’s unsettling to assume that’s what’s holding us back from achieving the ultimate goal of peace and harmony.