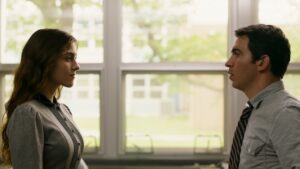 NOTE: This film was recommended to me by Emily Z. for “Steve Pulaski Sees It” in 2020, a yearly event where I take recommendations from readers.

Life comes at you hard and fast, sometimes with no rhyme or reason. I had no idea Donald Trump would be elected president five years ago. I had no idea I’d even still be reviewing films five years ago. Having said all that, I certainly didn’t foresee ever watching the directorial debut from the same woman who played an angsty tomboy in Unaccompanied Minors, yet here we are.

When it comes to Blame, Quinn Shephard deserves all the adoration, regardless of nitpicks (and I have plenty). At 22-years-old, she took a script she wrote in high school and commissioned it to be a feature film, serving as not only the writer and director, but lead actor, co-producer, and editor on the project. Rather than allowing the screenplay collect dust on her coffee-table, she put miles on it and, in turn, delivered a thoughtful, contemplate drama that even boldly pays tribute to whom we can believe are some of her literary heroes. Needless to say, I was a fan before I watched the film.

Shephard stars as Abigail, a woman who re-enters high school after a six month stint in a psych ward for reasons never fully outlined. She’s chastised by her peers who refer to her as “Psycho Sybil,” a reference to a Flora Rheta Schreiber novel about a woman with multiple personalities that I wouldn’t believe many high schoolers would know either. It’s a mystery to us why she warrants all the ignominy she gets from students, but her classmate, Melissa (Nadia Alexander), finds it rather easy to dislike her. An introverted woman with a tough exterior as noticeable as her bright-red, dyed-hair, Melissa loses the leading part in the student production of Arthur Miller’s The Crucible to Abigail and is stuck being her understudy instead. The part was assigned by their fill-in substitute drama teacher, Jeremy (Chris Messina), to whom Abigail takes a liking. Jeremy, a-failed-actor-turned-wayward-thirtysomething, is one of the only people we see not only listen to Abigail, but connect with her when it comes to discussing the play. Green with envy for unclear reasons, Melissa becomes hellbent on sabotaging Abigail in her taboo relationship, going as far as to turn away her closest friends (Sarah Mezzanotte, Tessa Albertson) in the process.

Shephard uses Miller’s play as a parallel to the narrative. Published in 1953, The Crucible dramatized the Salem witch trials of the 1690s, and used allegory and symbolism to draw similarities to McCarthyism in the United States. This type of pastiche has worked in the past (see Easy A, in which writer Bert V. Royal used Hester Prynne in The Scarlet Letter as inspiration for Emma Stone’s Olive Penderghast). As Blame goes on, Abigail becomes more entrenched in the role of “Abigail,” the temptress character in Miller’s work, eventually ditching her wardrobe of modest plaid skirts in favor of more revealing black dresses and a cross necklace. She becomes fixated on wooing Jeremy, moreso after their first romantic encounter leaves her ghosted, for lack of a better term. 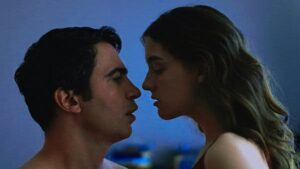 Throughout the film, there is a desire by the core triangle to be heard and appreciated that grows more glaring. Abigail can’t walk down any hallway without getting some type of scrutiny, be it a thinly veiled proposal for a date disguised as a mean prank, or passing dirty looks from students. When she gets some sliver of encouragement from Jeremy, it feels like the validation of self-worth she’s needed after her time in the hospital. Concurrently, Melissa struggles with her own identity. She lives at home with her “guardian,” whom we never truly know, and being cognizant of the fact that she can so easily get her horndog male classmates to ogle her with tight jean-shorts and lipstick, she tries and mostly fails to get Jeremy’s attention. Then there’s Jeremy, a passive man who you’d believe would say “life just happens to me” if you asked him about his present state in the world. His girlfriend sees him as a louse, and his judgment is poor enough that he casts himself as the role of John Procter in The Crucible in what appears to be nothing more than an opportunity to get closer to Abigail.

Shephard structures the story well enough that we get a strong feel for all of these characters, but we don’t get as much as depth as this narrative requires. Significant details are simply left too gray, such as the hints that Melissa is being abused by her guardian and why exactly Abigail is not only a pariah following her stint in a psych ward (that would be one thing) but an outlet for relentless cruelty. These missing pieces to the puzzle leave us with an ending that fails to resonate, in part because its choppiness negates an ostensibly significance reveal by both Abigail, in regards to her relationship to Jeremy, and Melissa, and her disdain for said relationship. The lack of patchwork leaves an otherwise accomplished looking film lacking in impact due to missing information. No matter what conclusion we can draw, omitted details linger and leave anyone’s summation incomplete.

If there’s one lasting takeaway for me, however, it’s the performative elements Shephard ties together so well. The overarching event is the school play, which requires painstaking rehearsals, but it’s a conscious act of performing for students who are already so used to acting in ways to gauge responses. Before they even know what they desire in a partner or from sex, teen girls like Melissa are so accustomed to flaunt their sexuality on the basis that they know it’ll merit reaction from the boys. The boys, too, offer girls like Abigail — with whom they have no positive preexisting relationship — beer and a basement in hopes she’ll come over and put on some type of show, and we all know what “the show” is. Shephard has a strong eye for symbolism and how to implement it, and if she can allow her next story to bake entirely, she’ll be a household name for many to appreciate.

NOTE II: Blame is available to stream for free on Tubi, Vudu, YouTube, and several other platforms.

My review of Not Okay