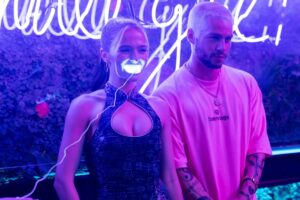 27-year-old Quinn Shephard is a talented filmmaker with a lot to say. Her debut, Blame, which she shot and released at only 23, proved as much. Even when she shows up in Not Okay, her sophomore feature, for an 11th hour cameo, unsubtly playing herself in a T-shirt that reads “THE FUTURE OF FILM IS FEMALE,” she earns an affirmative nod. Both her films can almost succeed on creative zeal alone.

Not Okay opens with a “content warning,” or a “CW” as the cool kids on Twitter say, warning viewers that the film contains “flashing lights, themes of trauma, and an unlikable female protagonist.” Cut to Danni Sanders (Zoey Deutch), who we see teary-eyed, sifting through a barrage of social media hate messages and death threats. These couple minutes suggest she was cancelled faster than Harvey Weinstein or Kevin Spacey.

The film then rewinds two months. Danni is a photo editor at an online magazine called “Depravity.” She tries to convince her boss (Negin Farsad) that she’s cut out to be a content writer, but her tone deaf approach to her clear and obvious privilege eludes her. In Danni’s mind, the lines between tragedy and happiness are blurred. Both merit attention, after all, which is what she seeks.

Such motivation sets Danni up for a lie that will change her life. It starts as an attempt to impress her crush Colin (Dylan O’Brien), a co-worker always engulfed in a vape cloud with his phone capturing every moment. She lies and tells him she’s going to France even though she knows she doesn’t have the funds. Being the accomplished photo editor she is, she decides to use her skills to make it appear that she’s on a writer’s retreat in Paris. The morning she posts a photo at the Arc de Triomphe is the day the city experiences a horrific terrorist attack that leaves more than two dozen dead. Rather than walk back the lie, Danni runs with it, playing the role of a survivor and eventually watching her overnight celebrity status soar.

Enter Rowan Aldren (Mia Isaac), who actually survived a school shooting which claimed the life of her older sister. Danni and Rowan become a pair of activists on the frontlines for social change and gun reform.

Zoey Deutch turns in another fine performance despite embodying a totally reprehensible individual; a product of the around-the-clock social media stratosphere that discards nuance in favor of immediate perception. Deutch has excelled in a variety of roles across all different genres; she impressed in Richard Linklater’s Everybody Wants Some!! years back and has seldom been seen in movies since Zombieland: Double Tap. Consider this her welcomed return.

But Mia Isaac makes a stronger impression. She’s perhaps the best young actress who, at this time, still doesn’t have a Wikipedia page. After being the highlight in this year’s Don’t Make Me Go, Isaac throws herself into a role as an activist determined to bulldoze her way through the noise in order to make an impact. Without delving into spoiler territory — although it doesn’t take a cinephile to know there’s only one way this story could end — Shephard thoughtfully gives Isaac’s Rowan the final words. And it just so happens to be the best scene in the movie thanks to her prowess.

For as charged as Not Okay occasionally is, it ultimately still feels too forgiving to its lead character and her amoral actions. Through title cards, Shephard promises Danni won’t get a redemption arc, even as she precariously teeters towards forgiveness before the final shoe drops. Shephard approaches the darkness embedded in Danni’s actions without ever fully committing to being as nasty as she ought to be. Furthermore, the film’s greatest shortcoming might indeed be the way it undermines the idea that Danni has hijacked Rowan’s trauma and used her words and false experience to undeservedly share her platform. That’s a sin in itself, but it’s not addressed until it’s far too late to develop.

Like Blame, Not Okay isn’t as great as it could be. In similar fashion, its ambition coupled with its best moments again make it marginally forgivable in the face of the filmmaker’s unmistakable talent.

NOTE: Not Okay is now streaming exclusively on Hulu.