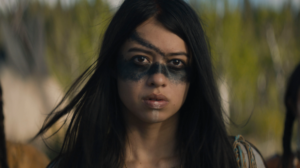 I’m not going to argue with anyone who says Prey is the best installment in the Predator franchise since the Arnold Schwarzenegger-led original from 1987. Such a feat isn’t that difficult when you have two Alien vs. Predator movies in the mix along with a half-hearted reboot starring Adrien Brody. Dan Trachtenberg can direct the hell out of any and everything on this planet. I’m convinced of that much. But I simply couldn’t get within more than arm’s reach of this 1700s-set prequel, as beautiful as it often looked.

But first, let’s address the film’s release. Yes, I’m as disappointed as any movie fan who watched what could’ve been a joyous big-screen spectacle on one of many streaming apps to which I subscribe. But Prey likely wouldn’t have been a roaring success had it been released theatrically. When you ignore movies like The Last Duel, The Northman, and even The Green Knight — and instead flock to the latest superhero movie — seeing what could’ve been a tentpole action flick relegated to streaming is, to quote the great cornerback Richard Sherman, the result you’re gonna get.

Set in 1719, centuries before Dutch encountered the Predator himself, Prey revolves around Naru (Amber Midthunder, Roswell, New Mexico), a young Comanche woman starving for experience. Like most Native women, she’s struggling to find her place amongst her male counterparts, most of all her brother, Taabe (Dakota Beavers). Taabe belongs to a tribe of men who hunt lions amidst the Great Plains. But what Naru stumbles upon is far more sinister than a lion: it’s a hulking, futuristic alien (Dane DiLiegro), who lurks in the swamps and can single-handedly kill a lion as if it were a house-cat. Suddenly, the human predators see themselves become prey.

At this point in time, there’s only so much you can do with the shaky Predator mythology. The Predator will inevitably show up, maim and kill a handful of humans and creatures before it’s defeated. This leads to Trachtenberg (the man behind 10 Cloverfield Lane) and screenwriter Patrick Aison to taking a more conservative approach to the material. The first 60 minutes of Prey is predominately focused on pacing. It gets us acquainted with the Great Plains in a beatific albeit ominous manner. We do get a strong feel for the setting, which ends up feeling more humanized than the characters themselves.

If anything wins in Prey, it’s the Comanche culture, which revolves around stealth hunting. The typical muscle-bound archetypes aren’t the ones facing off against the Predator, but rather a group of hunters with comparatively primitive equipment. Yet when you have a gaggle of characters that still feel as generic as the action heroes who have faced the Predator in the past, you’re left with the same movie wrapped up in different packaging.

There’s not much to Naru outside of a solid performance from Amber Midthunder. Her personal plight feels cookie-cutter. Like the film’s atmosphere, coupled with the English dialog, everything feels aggressively modern, so the worldbuilding struggles to pass this off as 1719. With thin characterization, the hourlong pacing feels much more like sparse table-setting, and leads to a predictable sequence of events we expect from a Predator movie in this or any other decade. This isn’t the fault of cinematographer Jeff Cutter; the film just doesn’t have compelling characters that make for a memorable outing. This is a period piece that manages to feel divorced from the period in which it’s depicting.

Even the now much-memed dog, Coco, who serves as Naru’s sidekick, looks like she wandered out of a foster care and into the 1700s.

Prey is more than competently choreographed and artfully captured, but it’s about as engaging as your average actioneer that finds its way on streaming and remains relevant for as long as it shows up in the “Recently Added” tab.