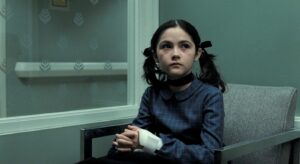 I can confidently say that Jaume Collet-Serra’s Orphan plays as well — maybe better — as it did in 2009. I can remember it being chided by some critics as an Omen knockoff and I wondered if they saw a different film than I did 13 years ago. While it’s difficult to call a two-hour film “lean,” Orphan flirts with that descriptor being that there isn’t a shred of flab nor wasteful scene to be omitted from its creepy, monumentally entertaining spin on the “child from hell” trope.

John and Kate (Peter Sarsgaard and Vera Farmiga) are still reeling from the stillbirth of their third child. It’s driven a cruel wedge in their marriage. It doesn’t help that Kate is a recovering alcoholic and John once cheated on her. The two take it upon themselves to adopt a nine-year-old Russian girl named Esther (Isabelle Fuhrman) from a local orphanage. In the beginning, Esther takes a real liking to their mostly-deaf daughter, Max (Aryana Engineer), even going great lengths to learn ASL shortly after her arrival. Contrarily, she’s got a short fuse with her mother, doesn’t build any rapport with the couple’s son Daniel (Jimmy Bennett), and quickly reveals herself as a daddy’s girl.

But something about Esther doesn’t sit right with Kate, even so soon after welcoming her into the family. Esther is well-mannered, wears Victorian garb, refuses to remove the bracelets around her neck and wrists, but most significantly, wherever she goes, danger follows. She’s always at the scene of the crime, and even the orphanage’s documentation on her is spotty. 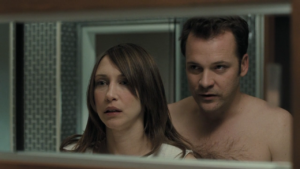 Orphan hyper-focuses on this family; screenwriter David Leslie Johnson refuses to introduce needless secondary characters. Sure, there’s a nun (C. C. H. Pounder) who worked closely with Esther and Kate’s therapist (Margo Martindale), but none of these characters overstay their welcomes. I suppose this is what makes Orphan feel lean despite its runtime suggesting otherwise.

However, Kate is unmistakably the main character here. Johnson’s script puts her in such compromising positions you almost have to wonder if the pain Vera Farmiga expresses is, at times, legitimate. Already something of a pariah amongst her family for her past addiction, Kate can’t convince anyone Esther is behind the multiple unfortunate events. John either refuses to recognize reality or still believes his wife is off her rocker. Kate’s own therapist often turns against her. And Esther instills so much fear into Daniel and Max that they don’t feel comfortable saying anything.

The gaslighting angle of Orphan is part of what makes it the compelling thriller it is. Johnson’s script entraps you in Kate’s perspective for long stretches of time, so much so that the feeling of helplessness becomes one of the film’s defining traits of greatness. This was more-or-less the beginning of Vera Farmiga’s ascension in the realm of mainstream horror (she’d go on to be a focal point in The Conjuring series). I’d argue her performance here is as good or better than in any of those films. 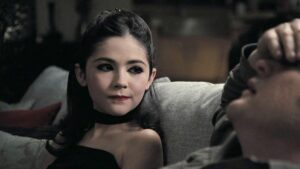 Isabelle Fuhrman, who was 10/11-years-old at the time of filming, is doing double-duty here. She’s so convincingly angelic and dainty in one scene, only to follow it by telling a boy that she’ll cut his “hairless little prick off” with all the scowl of a scorned Soviet wife. Orphan might not have been as great without the gaslighting element, but it certainly wouldn’t be memorable if not for Fuhrman’s command of the role and the screen.

The film was directed by Jaume Collet-Serra, as underrated a director as they come. He went on to direct a few Liam Neeson vehicles, including the standout Non-Stop, along with the shark-thriller The Shallows as well as Jungle Cruise. Collet-Serra’s staging of suspenseful moments here is what gripped me the most. Consider Esther’s first outwardly act of violence, which happens on a jungle-gym. You have to vouch for some very particular staging and shooting to make a populated, public space feel as labyrinth-like as what he does in that given scene. The execution has the ability to instill the same kind of fear a dark, unoccupied home would.

As noted, there are many, many movies about cursed/demonic/murderous children. Orphan smartly skirts any supernatural elements. Its focus is on psychology, even housing one particular scene that would make Freud monologue (sidenote: it was a relief to hear Fuhrman, promoting the upcoming prequel, talk about how the crew went above and beyond in making sure she was aware of said scene’s gravity and did everything they could to make her comfortable — these Hollywood stories need to be told more). The end result is one of the best horror movies of the last decade, a statement I can now say confidently, as it’s stood the test of time.

NOTE: As of this writing, Orphan is available to stream on Paramount+.

My review of Orphan: First Kill