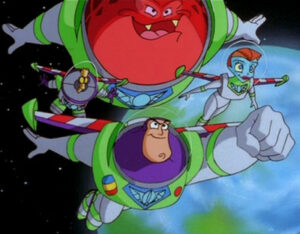 Recently rewatched on a whim — here is my original review published in 2016.

Buzz Lightyear of Star Command: The Adventure Begins is one of the many early 2000s “sorta sequels” my generation had to deal with while studios either worked on the official theatrical sequels to our favorite film or stalled and waited to see how these films or projects performed. Just a year after the release of Toy Story 2, and the beginning of a long hiatus until we got a third film, Buzz Lightyear wound up being the fortunate soul, getting his own Toon Disney program, which was good for over sixty episodes at the tailend of 2000. It all started with The Adventure Begins, an occasionally charming but mostly lifeless and flaccid extension of a sole character from a beloved film amidst a series of other boring characters that fail to do justice to their titular leader.

The premise revolves around Buzz (voiced by Tim Allen) and Warp Darkmatter (Diedrich Bader), both of whom searching for three missing Little Green Men (L.G.M.), who serve as the Star Command’s loyal scientists. When it’s discovered that Emperor Zurg (Wayne Knight) has taken the L.G.M. hostage, a battle between Buzz, Warp, and Zurg results in a massive explosion that kills Warp. With that, Buzz winds up becoming more self-conscious than he has ever been, even going as far as to refusing to take another partner for the sake of their safety over his own.

He is soon introduced to Princess Mira Nova (Nicole Sullivan), a brand new recruit for Star Command trained by Commander Nebula (voiced by Adam Carolla), who must work with Buzz in order to take down Zurg’s fortress. Zurg now has a new partner in crime, Agent Z (also voiced by Bader), who has an enormous artillery of weapons accessible by his newly installed robotic arm. This puts the entire galaxy at risk, leaving Buzz Lightyear and his trusty Star Command as the only souls who have the potential to defeat Zurg.

The comedown on this series compared to that of Toy Story is astonishing. While we never got acquainted with Buzz Lightyear’s intergalactic home in the original film, just by way of Toy Story‘s narrative grace and unforeseen animation style, you could tell that the possibilities were limitless. Having the Buzz Lightyear character and his home presented with the limitations of Saturday morning animation only makes the film feel that much more disingenuous. Had Toy Story been a traditionally animated film, this would not be an issue at all, but given how subversive and uniquely balanced that film was, in its narrative, its appeal, and its many colorful characters, Buzz Lightyear of Star Command feels like a startling fall from grace.

It also simply feels like an obligation at keeping a brand alive from a studio that should be working on a multitude of other things. Pixar’s strong-suit was always creating new and innovative ideas that would breed emotions and unapologetically original moviegoing experiences. There’s no reason for them, and Disney, for that matter, to waste time on a project that would ultimately not even be a successful foreword for a future Toy Story installment given the incredible length of time between the second and the third film.

As a means of basic entertainment, I suppose Buzz Lightyear of Star Command: The Adventure Begins satisfies, but when it really comes down to being satisfied and feeling like your time with a film was well-spent, you’d be better off dabbing into the Toy Story shorts. Sure they’re of varying quality, but you at least won’t have one take up a particularly taxing amount of your time.