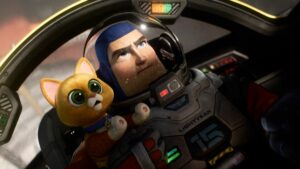 Pixar has so much equity built up amongst critics and audiences alike that it shouldn’t seem like the affront it is that two terrific films in Soul and Luca were subjected to Disney+ releases while Lightyear — which feels tailormade to be released onto a streaming service, watched, and then promptly forgotten — earned the honor of being the studio’s first theatrical release since the pandemic began.

Lightyear isn’t a compelling origins story, nor is it worthy of being Andy’s favorite movie. It’s a hackneyed work that’s purpose is keeping a brand on life support. It’s a country-mile behind even the weakest entry in Pixar’s flagship franchise, and dare I say, I think I enjoyed Buzz Lightyear of Star Command: The Adventure Begins more.

The concept of “Lightyear” — the idea that Andy from Toy Story watched this in 1995 and that’s what prompted him to welcome Buzz to his toy collection — is more fun to debate and debunk than it is to endure. Despite its appropriately chunky character design, this doesn’t feel remotely retro nor relevant enough to live up to its prologue — which also missteps by taking us out of the experience.

Buzz Lightyear (voiced by Chris Evans) is a Space Ranger, who lands on a planet called “Tikana Prime.” It appears safe and habitable until deadly insects and Graboid-esque vines begin attacking him and his partner, Alisha (Uzo Aduba). Buzz’s ego gets in his own way, and causes him to inadvertently strand his ship on the planet. The crew aboard the ship is then tasked with building a crystal, which will serve as a power-source and hopefully get them on a course back home.

This takes years, however. When Buzz gets the opportunity to test the crystal, this results in many more years passing. During this time, Alisha falls in love with a woman, starts a family, grows old, and dies in a matter of moments. Buzz’s companion then becomes Sox (Peter Sohn), a scene-stealing robotic feline, who develops a working fuel crystal. By the time that happens, Emperor Zurg (James Brolin) is in control of Tikana Prime, and Buzz is now working alongside Izzy (Keke Palmer), Aisha’s granddaughter and a band of sloppy space cadets.

The film is an effort to tell the story of the real Buzz Lightyear who inspired the Buzz Lightyear toy, who became best friends with Woody. You have to keep reminding yourself that you’re not watching the origins of the Buzz you’ve come to know over the course of three decades and four movies. That right there makes it more apparent that Lightyear squanders what makes Buzz so lovable in the first place. Buzz (the toy) operates under the belief that he’s a real Space Ranger. He’s pretentious in the way he thinks he himself is responsible for protecting the entire galaxy rather than simply being a toy. Everybody from Woody to Rex is aware of this; the only one none the wiser is Buzz. That’s the whole joke.

In contrast, the Buzz Lightyear in Lightyear suffers from the Superman problem of remaining both indestructible and devoid of personality. He’s impenetrably stoic, and with very little effective humor added into his character, he’s a vapid archetype of a superhero.

Outside of Sox — who is ultimately another iteration of the adorable Pixar sidekick, at the end of the day — Jason Headley and Angus MacLane (making his debut as director) don’t loan this planet a lot of character in itself. There’s frustratingly little worldbuilding, and nothing to distinguish Tikana Prime from just another hodgepodge of space vomit.

I refrain from using the term “cash grab” because, in essence, every mainstream American movie is a multi-million dollar production intent on tripling its earnings. Movie theaters are vehicles for studio profits first and art galleries second. It’s the works that feel creatively inspired that are able to mute this sad fact. Lightyear is so lacking in the creativity department that its root intentions are as obvious as the events taking place on-screen: this is a movie made to keep the toys flying off the shelves and assure the theme-park attractions stay relevant.

My review of Buzz Lightyear of Star Command: The Adventure Begins (2000)