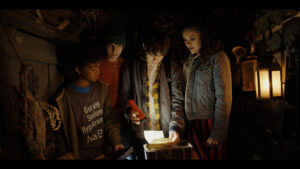 Every time you press play on the latest seasonal direct-to-streaming offering, you have a chance at discovering the next holiday gem, like last year’s 8-Bit Christmas. Sometimes, however, you get Spirit Halloween: The Movie. That’s simply the risk you take.

A first-rate concept with a third-rate execution, thanks to lazy writing and subpar acting, Spirit Halloween: The Movie somehow turns the elite idea of four kids’ spending a night inside a pop-up department store Halloween shop into a lumbering bore. This is in spite of its length (73 minutes), which is more in-line with a TV special than a feature film. From its lackluster personalities, corny sense of humor, and hackneyed Goosebumps-look, Spirit Halloween: The Movie feels tailormade for Nickelodeon.

Set in Small Town USA, middle-schoolers Jake (Donovan Colan), Carson (Dylan Frankel), and Bo (Jaiden J. Smith) find themselves inadvertently drifting apart as they near high school. Jake’s mother (Rachael Leigh Cook) has remarried, but he’s still hurt by the loss of his father. Carson (Dylan Frankel) thinks he’s a man now after growing three chest-hairs and no longer having a high-pitched voice. The pubescent changes have made him think trick-or-treating is for little kids, and that the three of them should opt for a party or something more “grown up.” The diminutive Bo is too timid to have an opinion of his own, so he’s relegated to keeping his two best friends from going for one another’s throats.

After some squabbling, the trio decide to spend the night at a Spirit Halloween store, which is located at a spot in town where cell reception is poor. They lie to their folks while Carson’s older sister, Kate (Marissa Reyes), who is also Jake’s crush, covers for them. As the opening scene suggests, the Spirit Halloween store was erected on an old orphanage in the 1940s. It was Christopher Lloyd of all people who bought the property before being cursed by the woman who ran the orphanage, thereby tethering his soul to the land. Halloween is the only day in which his soul came emerge, and he’s able to possess various objects around the store, which should make for one spooky night inside the kitschy yet charming beacon of Halloween lore.

Kate eventually joins the boys after Jake’s mother begins to worry, which does help liven things up inside Spirit Halloween. But Reyes’ presence doesn’t mean the boys consequently find tangible personalities. It’s always tough to harp on child actors, and having not seen any of their prior works, I’m just going to assume Colan, Frankel, and Smith were underserved by a lean screenplay that makes them out to be caricatured pre-teens.

Spirit Halloween: The Movie tries desperately to recall The Goonies, or at least be a kid-friendly version of Stranger Things, but it’s too thin to hold any weight. The setting itself is capped off by your predictable share of Halloween costumes, statues, and animatronics. However, David Poag’s direction fails to establish any sense of place. The store itself feels less like a character and more like any old haunted house, lacking in personality and originality. I’ve long loved movies set in department stores. All it takes is something like this to remind me how rare of a breed the good ones are.

For most, Spirit Halloween: The Movie is liable to be forgotten as quickly as it’s viewed, a real shame for a top-tier concept released during spooky season.

NOTE: Spirit Halloween: The Movie is now available to rent on a variety of platforms.