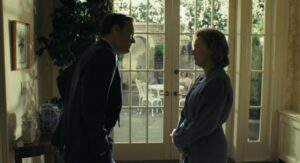 The Post is almost worth the price of admission solely to see a trifecta of talents hone their craft and sink their teeth into a juicy opportunity that continues to solidify their separate, similar legacies. The trio is made up of Meryl Streep, Tom Hanks, and Steven Spielberg, three treasures of our time who come together to give us a mostly successful drama that plays more like a thriller given our presently tumultuous political landscape and the recent attacks on journalism that have come in the last couple years.

The film’s story is a familiar piece of history for most, as it concerns the US government’s effort to cover-up motives and briefings regarding the Vietnam War in a series of classified documents known as the “Pentagon Papers.” The Papers consist of hundreds of documents that chronicled the United States’ observance and subsequent military action in Vietnam, with information being collected as early as 1945. These classified files become the object of desire for two newspapers after Daniel Ellsberg, a military analyst and employee of RAND, a research think-tank, illegally released them, causing both “The New York Times” and the then-small-time “Washington Post” to fight over the documents in effort to obtain them for publication.

The Post follows Kate Graham, the publisher of “The Post” at the time. Kate bears the burden of being the first female publisher in the history of American journalism as well as being the shot-caller on the controversial decision of whether or not to publish the Pentagon Papers once they’re in the “Post”‘s possession. Her confidant is Ben Bradlee (Tom Hanks), the paper’s editor-in-chief, who hawks over the newsroom as well as “The New York Times” to see who will leak which stories first. Also rounding out this ensemble are a barrage of character-actors in the form of Tracy Letts, playing Fritz Beebe, a writer for the paper, Bob Odenkirk, playing Ben Bagdikian, a news critic among the first to be faced with the Pentagon Papers, Matthew Rhys playing Ellsberg, and Bruce Greenwood playing Robert McNamara, who served as Secretary of Defense during that time and whose name littered some of the most controversial aspects of the Papers.

Boil down the time-sensitive specifics of The Post and you are left with a mold of ideas that can be placed over the current state of journalism and the US government’s relationship with newspaper publications with disturbing commonalities. Spielberg and writers Liz Hannah and Josh Singer (The West Wing, Spotlight) are careful to distinguish moments of government intervention at the expense of “The Post” and national newspapers as germane to the “fake news” era, where the current administration considers any negative press untrue press. It is true that one of the most relevant issues facing the United States is the distrust in the media; America was built to survive a president in a lot of ways, but what cannot be sustained is a press that isn’t trusted nor viewed as the voice of the people. 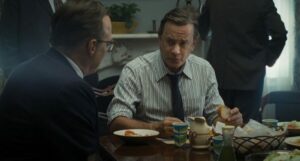 The Post goes far to make itself timely by making its writing very conscious of the current landscape, something its inevitably billed “sister-film” Spotlight didn’t have to strain to do. A good part of the reason Spotlight captivated myself, and so many others fell in love with the Tom McCarthy film from 2015 was its ability to detail the journalistic process, a huge cover-up, and how the sexual abuse of the Archdiocese was sanctioned and obscured at the institutional level all at the same time. It collected enormously lofty ideas and still retained them in a film that was invigorating as well as respectful to the landscape and process-minded journalists that have literally risked their lives to make this country’s press so great. The Post‘s approach is far more on-the-nose than Spotlight‘s, and everything feels neatly gift-wrapped in the stereotypical Spielberg way that sometimes gives you exactly what you thought you were going to get it the very way you predicted you were going to get it. It’s excessively mannered and theatrical, so much so that nothing can occur between characters or with a character by themselves if it doesn’t further the plot in a meaningful way.

There’s no surprise in The Post‘s narrative nor approach; it’s a story that’s been iterated in many history books and how it’s handled here is competent but slightly uninspired outside of its two key performances. Meryl Streep doesn’t need to try and impress us anymore by reminding us she’s one of the best actresses working today, but she does it yet again, and that’s the key to her sustained success. Tom Hanks is on the same playing field; we know he is good and we relish in the fact that he is so good by taking his cadence and power to command, especially under the guise of Spielberg’s direction, for granted. Finally, Spielberg’s craft is on full display here: the carefully choreographed movements and placements of all the actors, the straight-laced, stone-faced tone, and the often moody aesthetic to compliment the aforementioned tone are all present, mostly to satisfaction.

It’s just unfortunate to note how many moments culminate in succession to give us a story that’s common knowledge, told with the angles and emphasis we expect, with the factor of timeliness paradoxically being the most relevant thing about the film. Couple this with a somewhat sloppy, jam-packed third-act that ostensibly realizes that it cannot cover two major American scandals in one film, The Post also seems to be on a self-imposed time-limit of sorts. Make no mistake, for this isn’t a critique that the film is “too timely,” but the fact that it so consistently measures up to what you think it’s going to be that this fact is more a predictability than a revelation. Although I knew it was going to be relevant to the current social-climate, Jordan Peele’s Get Out caught me off-guard by the ways it managed to be relevant and how it managed to defy even very optimistic expectations. The Post is predictably topical and unsurprising in the way it handles the present day connections, while the great part of a timely movie is often connecting the dots yourself while watching said film.

The film is satisfactory, and I feel most audiences, whether they agree or disagree about the current landscape of journalism, will extract the message they’re expected to thanks to the democratized approach Spielberg and company take. The trio of talent here are so dedicated to their work and their commitment to projects has always been evident, even in the case of The Post, when even the relevance of the project does its part to swallow them at times.