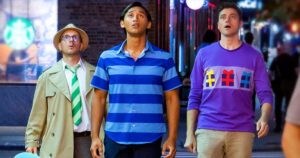 Blue’s Big City Adventure is the No Way Home for us nineties babies who learned problem-solving and confidence by way of Blue’s Clues. If you’re an adult, like myself, and were captivated enough by the trailers to willingly press “play” on the film, you might find yourself questioning why you did so during the first 15 minutes. A wave of skepticism might wash over you.

But rest assured, this cheery and frequently amusing little flick has something for everyone. Whether it’s the presence of Steve Burns following his heartwarming reappearance as “Steve” in the viral clip last year or worlds colliding in the form of three generationally iconic hosts sharing the screen, Blue’s Clues‘ leap to the big/small screen offers something for preschoolers, their companions, and their parents alike.

Like the program that began in 1996 — only it’s based on the ongoing series Blue’s Clues & You!, which began its run in 2019 — Blue’s Big City Adventure is reliant on audience participation. One of the elements that made Blue’s Clues so special was its fourth wall breaks; it invited children to become a part of the show and its plot progression. It kept kids busy while they passively watched television. Other icons such as Dora the Explorer would follow suite with the same approach.

This adaptation transports Blue (voiced by Traci Paige Johnson, the original voice of Blue) and Josh (Josh Dela Cruz) to New York City. Josh is en route to the audition of his life, where he could land a role in a huge Broadway production. But unlike their animated reality, the bustling streets of New York are overwhelming to both Josh and Blue. They’re a long way from their talking salt and pepper shakers and their handy-dandy notebook. Speaking of which, the conflict on which this film is predicated is the fact that Josh has left his notebook behind. He needs the help of his preschool audience to look for those familiar dog-paw clues essential into helping him recover his notebook and get him in front of Rainbow Puppy (Brianna Bryan), the adorable pup hosting the auditions.

Shifting the series from the animated confines of Josh’s home to the towering cityscapes that is New York proves to be a challenge. He’s lost without his notebook, which is where Steve (Burns) and Joe (Donovan Patton) come in. The former Blue’s Clues mainstays are thrust into action when they get word of his struggles. Steve has adopted the look and attitude of a film noir icon. He still maintains his appetite for “three clues” (pawprints), but sometimes needs four or five to get the job done. Meanwhile, Joe is working a “present shop” in New York City, where “every day is a gift” as long as you can afford it.

These familiar faces coupled with subtle adult jokes make the first ever Blue’s Clues movie amusing for those who have outgrown the impulse to shout at the screen. The presence of such mainstays as Mr. Salt, Mrs. Pepper, Cuppa Coffee, and others are warm enough — and, frankly, have survived potential animated butchering — to make us older folks recall a simpler time in our lives.

Throughout Blue’s Big City Adventure are musical numbers, mostly led by Josh. The adult in me believes they’re ubiquitous enough to suggest that Dela Cruz, like Burns, wants a career outside of being a children’s entertainer. He certainly has the chops. He dances, sings, and swings impressively, nearly to the point you might you might forget that he’s interacting with a lot of blue-screen assistance. For the target audience, however, he adjusts to this big, busy world just fine.

I’ve mentioned this in the past, but I’m old enough to remember when TV shows making their leap to the big screen was a major event. The Simpson’s Movie. The three Rugrats movies. The Spongebob Squarepants Movie. The list goes on. Blue’s Big City Adventure is an outlier in the realm of small-screen children’s entertainment insofar that it’s likely to entertain the adults forced to sit through it multiple times over at least as much as it’ll entertain its target demographic. The question is, despite how it brings three individuals from different eras together, is it too little/too late, in a sea of regurgitated IP? As amusing as it is, it doesn’t feel like The Jimmy Timmy Power Hour to me.