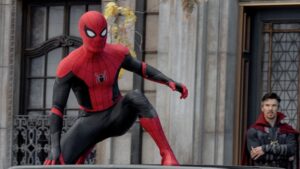 We can talk about the warm fuzzies Spider-Man: No Way Home gives us Spidey fans. It’s clearly another calculated superhero venture. Yet from its winks and nods to previous franchises to its inclusion of familiar villains, it makes us forget such an earthly realization thanks to how deftly it juggles multiple heroes and villains. Besides, I’d rather talk about how well those villains are portrayed and how incredibly adept Jon Watts is to directing complicated sequences that still remain visually clear.

This is a movie that begs you check your cynicism at the door, and if you haven’t, it’ll make sure you disregard it very shortly after it begins.

No Way Home picks up almost instantly from Far from Home, which left us with a breathless cliffhanger. The audio from the closing sequence plays over the Marvel logo, which seems to take longer to establish itself than usual. Mysterio has reveled the Spider-Man’s identity, which means Peter Parker’s (Tom Holland) life has changed in the blink of an eye. Peter reacts with his first instinct. He scoops up M.J. (Zendaya) from a crowded city block and hurls her through cityscapes in an effort to pull her (before himself) to safety.

In effort to save the futures of M.J. and his best friend Ned (Jacob Batalon), Peter decides to contact Dr. Strange (Benedict Cumberbatch), who can cast a spell to make the world forget Spider-Man’s true identity. Thanks to Peter’s indecisiveness — not the first time we’ve seen it over the course of this trilogy — the spell backfires and instead summons several villains across multiple different universes. Strange is able to get it under control, but not before Doc Ock (Alfred Molina), the Green Goblin (Willem Dafoe), and Electro (Jamie Foxx) find their way back into the picture.

While Strange’s plan is to send the villains back to their respective universes so they can meet their ugly fate, Peter, who is now portrayed in the press as a reckless vigilante, seeks to give them a second chance; of course not without the help of his two loyal comrades and the adoringly supportive Aunt May (Marisa Tomei).

It’s no secret that Marvel has had difficulty making their villains as interesting or even remotely as compelling as their heroes since the dawn of the MCU. Spider-Man: No Way Home does what should be the ultimate sin in giving us a handful of villains, not to mention two distinctly familiar characters that will, judging by my showing, elicit cheers and applause upon sight. I’m as happy as I am relieved to admit that they do justice to all these characters. Not only does Foxx’s Electro get relatively equal screentime to Molina’s Doc Ock — who remains as versatile a villain as their ever was — but they are afforded humanity that might’ve been sacrificed in previous iterations of the Spider-Man mythology. This goes beyond a casting/marketing gimmick. It’s a move that earns the emotional beats it demands while affording us the ability to reconnect with those we’ll forever treasure.

Never does No Way Home feel like a cheap “greatest hits” compilation.

A lion’s weight of the credit goes to screenwriters Chris McKenna and Erik Sommers, who have analyzed the mistakes of Spider-Man 3. They resist the urge to overcrowd the narrative by playing with the pieces they’ve reintroduced. Such inclusions play into the light-hearted banter on which this trilogy’s been predicated, yet contribute to the larger theme, which reminds us that “with great power comes great responsibility.” That said, it’s been too long since we’ve seen Doc Ock, who might forever remain my favorite antagonist in any superhero movie that’s been made and to be made.

Similar to Sam Raimi’s Spider-Man 2, No Way Home has Peter Parker finally coming to terms with what it means to be a superhero. Homecoming showed him crashing into buildings and fumbling over himself in ways we weren’t necessarily accustomed to seeing by a hero in tights. Far from Home showed some maturation, but still suggested room for growth in the face of pressure. Here, McKenna and Sommers’ play with real-time. They give Peter Parker little time to grapple with his identity being revealed. He decides empathy and course-correction is the best course of action. The script is so tight that it finds itself externally relevant, admitting shortcomings by previous filmmakers in bringing the web-slinging hero to the big screen.

Let it be known that even the right decisions don’t feel so good, as Holland’s Peter Parker learns in the devastating-yet-necessary final minutes. The weight of a superhero is more than just glory and adulation. For the first time since Raimi’s uncontested gem of a sequel, No Way Home honors that theme.

These elements would be little if the film didn’t look half as good as it does. Jon Watts shows he’s up to the task with an early sequence that has a bustling metropolitan completely warped through crunchy universe-bending at the hands of Dr. Strange. No matter how chaotic No Way Home seeks to get, Watts and the talented team of visual effects artists assure the action is clear, with a decisive sense of spatial awareness that makes it easy to soak up. It’s profound to see the growth of a filmmaker, who once made a low-key movie called Cop Car, transcend universes so vividly. Watts brings a variety of different characters together, and honors them valiantly by assuring they don’t get lost in a mess of CGI.

No Way Home does further the ongoing issue of Marvel movies in the burdensome desire to evoke humor by way of “mic-drop”-style quips. At times, however, I was too distracted to care. I’m not sure this is movie is as buttoned-up structurally as Homecoming, so to speak. Nor does its central focus rest on a particular villain long enough for that singular entity to be completely developed. This is a reintroduction and a rewriting-of-course. I spent more time elated by the fact that everyone — from Holland, Zendaya, Batalon, to others I won’t name for fear of dreaded spoilers — gets their time to shine in what is the single-best Spider-Man movie since 2004.