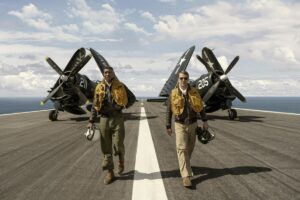 Top Gun: Maverick coming out earlier this year, on top of being the blockbuster revelation it was, does no favors at all for J. D. Dillard’s Devotion. Mere seconds into the trailer — and maybe 30 minutes into the actual film — and your mind recalls the boundless energy, Tom Cruise’s boyish smile, and the high octane action that permeated nearly every sequence in that film. Glen Powell’s presence here only makes you wish he was still suited up as Hangman rather than a less compelling supporting performer.

Adapted from Adam Makos’ book Devotion: An Epic Story of Heroism, Friendship, and Sacrifice, Dillard’s film tells the story of Jesse Brown (Jonathan Majors), the first African-American aviator to complete the U.S. Navy’s flight program. Brown was a Korean War hero, his story still not as mainstream as it probably should be. Devotion is a dainty, dutiful biopic on Brown, but not only does it suffer by comparison in the entertainment department, it also undermines the emotional heft of this story.

The film starts in 1948 with the arrival of Tom Hudner (Powell), a white aviator, at the Naval Air Station in Pensacola, Florida. While in the locker-room, he has a loud string of hateful slurs. Jesse Brown (Jonathan Majors, Da 5 Bloods) is the one uttering them, to himself, in a mirror. Tears fall from his eyes. Brown has put himself through undeserved torment trying to become a noble aviator. He keeps a small pocketbook with him at all times; all the racist comments and obscenities that have been hurled his way fill their pages. Consequently, his pre-flight exercises are as described. It’s his way of getting confidence to take off, and most importantly, land safely so he can go home to his wife, Daisy (Christina Jackson), and their young daughter.

The film chronicles the bond and subsequent friendship formed between Brown and Hudner. The two don’t fancy themselves as bros early into the picture. Instead, Jake Crane and Jonathan A. Stewart’s screenplay keeps them apart for a while, at opposite ends of the classroom, where they glance at one another’s process. Hudner is an All-American boy; an accomplished pilot, and the only one in the class (alongside Daren Kagasoff and Joe Jonas of all people) who consistently gets perfect marks. It’s not that Hudner doesn’t work as hard as Brown, it’s that he’s not as frequently challenged simply by the color of his skin. 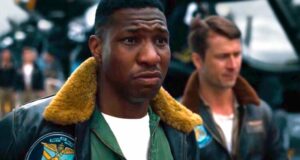 Slowly but surely, the two brush shoulders and strike a connection. But between that is a lot of repetitious training, including the film’s most harrowing scene, as Brown is flying a fussy aircraft and must land on an island hanger. His mind is so clouded with distrust that he’s unable to believe his radioed-in flight directions as gospel. He half-assumes the man waving the bright orange flags is trying to steer him to crash. True or not, he’s landing this plane on his own terms, even if it means circling back for a do-over.

Another scene involves Brown, Hudner, and the entire squadron going out on the town in Cannes, France, where they meet the 18-year-old actress Elizabeth Taylor (Serinda Swan) at a casino. Present company excluded, the outing affords Hudner and opportunity to learn why Brown is the way he is. Hunder’s philosophy is that mistakes result in death, so every move he makes as a pilot must be by the book. Brown, on the other hand, is still waiting to see and read a book that considers him worthy of the same treatment as his white counterparts.

The visual effects in Devotion are uniformly solid. We’ve come a long way from the likes of Red Tails and other films that marketed their cutting-edge POV shots of pilots in cockpits, soaring thousands of feet in the air at lightning speed. Dillard’s direction is clear and advanced, even if the digitization of these moments finds itself more apparent so soon after Maverick treated us to real planes and authentic sounds.

Jonathan Majors is on the cusp of superstardom, and Devotion reminds us why he’s got next. Often he creates an emotional connection with the audience simply by facial expressions. He shoulders the weight of a linear, by-the-numbers screenplay that presents limited emotional investment and pathos that ring hollow. Powell is good, but he’s unchallenged by another role where he’s the smartest guy in the room.

The opportunity to tell a richly conceived, emotionally potent story about America’s “Forgotten War” remains. Devotion will be seen by some, and probably enjoyed initially, yet the film also seems destined for a fate like Flyboys or the aforementioned Red Tails: second-tier entertainment in a crowded subgenre forever redefined by Tom Cruise’s star-power and willingness to do his own stunts.