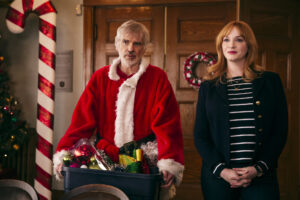 Nothing says the holiday season like spending the day after Thanksgiving all alone in an empty auditorium watching the sequel to one of the most miserable holiday films of the last decade, breeding life into the vacuous theater with your cackles at all the mean-spiritedness. It’s a kind of experience so vapid of love and romance that it would make Willie T. Soke (Stokes?) and maybe Charles Bukowski grin at the unapologetic expressions of yuletide cheerlessness.

Bad Santa 2 is about what you would’ve expected – and what I think audiences would’ve enjoyed – from a sequel to one of the 2000’s finest comedies had it came out within five years after the original film’s release, not thirteen years later. After a brief stint in development hell, with which came countless other comedies that normalized raunchiness and generally mean-spirited characters, Bad Santa 2 in 2016 inevitably looks like a film pining of relevance. Not to mention, after a host of underperforming sequels nobody asked for this year (Zoolander No. 2, Neighbors 2: Sorority Rising, Teenage Mutant Ninja Turtles, Independence Day: Resurgence, and My Big Fat Greek Wedding 2 to name a select few), it would seem that it fits comfortably in one of cinema’s few consistencies this year.

While fans of the original might not have asked for a sequel, I was one of the few that quietly hungered for it. The original Bad Santa was a great antithesis to the holiday season; a marriage of low-life characters and crime in contrast to the positive festivities and films of the holidays any given year. Bad Santa 2 delivers on a note that’s very comparable to its predecessor, refocusing on the cantankerous codger/convict Willie (Billy Bob Thornton), who is continuing his life at the bottom after retiring from the world of knocking off malls during Christmastime by playing the role of a mall Santa. After a suicide attempt is disrupted by his longtime “friend” Thurman Merman (Brett Kelly) barging into his apartment, Willie reunited with his former, backstabbing partner Marcus (Tony Cox) to try and knock off a holiday charity, which is reportedly sitting on $2 million.

Joining the conniving duo this time, however, is Sunny (Kathy Bates), Willie’s aging mother, whom he hasn’t seen nor heard from in decades, despite despising nonetheless. Begrudgingly, he decides to work with her and Marcus in order to obtain the money, which also involves getting close to Gina (Jenny Zigrino), an attractive security guard and Diane (Christina Hendricks), the head of the charity.

The tone and humor is fairly consistent between the sequel and its predecessor, the only real difference being the black comedy tone has been tweaked a bit more to emphasize the “black” part. This is a far more nihilistic film than even I imagined; the original Bad Santa had highly comedic tinges that offset even some of its darker undertones, but the entirety of this film feels grimy and unclean. Couple that with the fact that you now have new characters like Sunny and Diane who are trying to find their footing in this dark world the same way the late characters played by Bernie Mac and John Ritter in the first film did, so you have everyone sort of competing to get on the same, filthy, thankless level. It’s not a detracting force, but it is a notable feature this time around.

I think the real problem people who care enough to seek Bad Santa 2 out is that the concept behind Bad Santa hasn’t changed, but moviegoers and the general public have. Upon its original release, Bad Santa predated by several years films of the Judd Apatow breed of comedy, where heart and the occasional moments of gloom were offset by a sort of genial charm or punctuating vulgarity. The public has grown accustomed to that little sweet spot even the most sorry, cynical comedies these days offer, and there aren’t many of them.

Bad Santa 2 is in part a throwback to the subversive film-style of lacking a narrative silver lining, but it’s so long-delayed and tardy to its own party that people are going to care as much about it is as the fact that Warren Beatty has his first movie in fifteen years out this same weekend. Both are apt reflections of a bygone time that don’t resonate with modern moviegoers, especially in an oversaturated, hectic season.

NOTE: As of this writing, Bad Santa 2 is available to stream on Showtime.

My review of Bad Santa