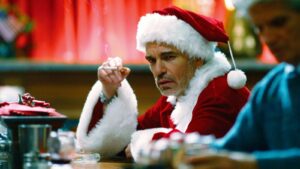 Having watched Bad Santa nearly every year since I first saw it over 10 years ago, I figured it was time for a re-review amidst another holiday season. This is one of my favorite comedies of the 2000s. Films I hold in such high regard are generally tough to review. But Bad Santa, I know, is an annual holiday favorite for many. In a landscape saturated with frothy, aggressively sentimental Christmas cheer, here’s a movie that pushes all its cynical, vulgar chips into the center of the table. I’d say there need to be more movies about eating, drinking, shitting, fucking Santa Clauses, but few would probably touch this one.

However, complicating matters is the fact that there are three different versions of Bad Santa: there’s the 92-minute theatrical cut; the 89-minute “director’s cut,” approved by director Terry Zwigoff, and the 100-minute unrated version known as “Badder Santa” (a clear and obvious marketing ploy). The differences between the three versions are significant. For example, Zwigoff’s cut — which I would dub the weakest of the three, frankly — omits Willie’s (Billy Bob Thornton) voiceover in the opening scene. The other two versions do not. The difference this creates in expectations was already thoughtfully articulated by The AV Club’s Mike D’Angelo, so I’ll let that piece speak for itself. 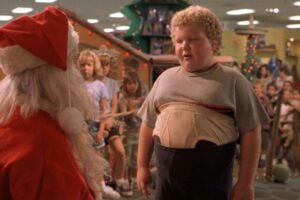 In my opinion, the unrated cut is the superior of the three. This evening, I viewed the theatrical cut for the first time in a few years. Having seen all three versions at least two or three times each, I often forget that when I watch the shorter cuts of the film, certain lines are omitted. For example, a brilliant comic moment comes after Marcus (Tony Cox) forces an accident, which renders mall security manager Gin (Bernie Mac) on the cusp of death. The most effective comedy in that particular scene is Marcus sarcastically remarking at the terrible situation, but then suggesting he’s broken only 30% of his ribs — a reference to an earlier negotiation scene between the men. You won’t get that kicker line in the theatrical nor director’s cuts. They’re all about economy.

Frankly, I’d rather spend as much time with these miserable SOBs as I can. For the (presumed few) who haven’t seen Bad Santa over the last 19 years, the film revolves around Willie and his dwarf assistant Marcus. They’re two career criminals, who wait all year for Christmastime for all the wrong reasons. During the holiday season, they don their gay apparel — Santa Willie and Marcus the Elf — and pick a mall in a new city. They will spend a month putting up with snot-nosed little brats; their reward being a late Christmas Eve when they disable the mall security system, crack the mall safe, steal all the loot and the merch, and get the hell out.

It would be the perfect heist except with each passing year, Willie gets less and less reliable. He’s addicted to sex, but not as much as he’s addicted to Stoli vodka. This year, they’re in Phoenix, and on top of the plus-sized women and booze, Willie has more distractions. He meets Thurman (his name unknown until the third act of the movie, as he’s referred to as “the kid” for much of it), played by Brett Kelly, an innocent, school-aged twerp living under the “guidance” of his grandmother (a basically catatonic Cloris Leachman). Willie shacks up at Thurman’s house, and forms something of a dysfunctional bond with the kid. He also meets Sue (Lauren Graham), a woman who matches his sex drive and, bonus, has a Santa Claus fetish. 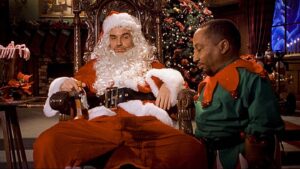 The timid, hyper-sensitive manager (John Ritter) doesn’t trust Willie nor Marcus. He enlists in Gin to uncover some dirt on the duo, so they can (hopefully) fire them due to their presumptive checked backgrounds. Because, you know, firing an African-American dwarf without cause will surely play well on CNN.

Who else but the Coen brothers could devise a script so heinous? The Coens’ original script was apparently so lewd and reprehensible, Universal outright rejected it. Bob Weinstein of the now-disgraced Miramax wanted it and didn’t look back. Rewrites came from Glenn Ficarra and John Requa (who would go on to write The Bad News Bears, also starring Thornton), and the Coens stayed on as producers. Enter Zwigoff, hot off of the enjoyably offbeat Ghost World, and you got yourselves a picture.

If the sardonic malaise of Thornton’s vulgar, heavy-drinking iteration of Santa Claus, or Marcus’ hysterically blunt assessments of his partner’s character — “you’re an emotional fucking cripple, your soul is dogshit, every single fucking thing about you is ugly!” — aren’t your bag, you might at least enjoy Bad Santa for its delightful absurdities. Ritter’s mall manager and Mac’s Gin are characters who earn more laughs from me with every rewatch, it seems. Ritter is so laughably buttoned-up as he strains to be PC that you could believe he’s who Thurman Merman would grow up to be. Meanwhile, Mac shouting exclamations such as “sweet Jews for Jesus” or telling a shoplifting kid “Happy Kwanzaa” after stealing his mp3 player as payback are the exact kind of bad laughs that serve as Bad Santa‘s gasoline. 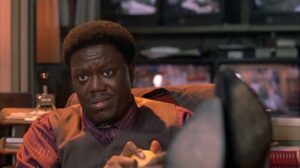 The satirical angle present provides great fun as well. Bad Santa lampoons those dime-a-dozen holiday movies that put a vaguely unlikable, antihero-ish adult and cute, plucky child together in order to create opposites-attract magic. Zwigoff’s picture turns the adult archetype into a downright loathsome loose cannon who belongs behind bars and the kid into a total buffoon. A credit to Brett Kelly for understanding the assignment at such a tender age. Whether he’s going on about wanting a pink (or is it purple?) stuffed elephant for Christmas, or a giant gorilla that could beat up his bullies and take him to whatever the hell “the talking walnut” is, Kelly is both game and mature enough to play with the adults here.

Another reason I prefer the unrated cut of Bad Santa over the other two is that it allows the plot and comedy to breathe. Zwigoff’s cut races past at under 90 minutes. It’s chopped enough that bantering moments between Willie and Marcus in parking lots and food courts feel like they’re in fast-forward. The director’s vision even omits the boxing scene, which provides a glimmer of hope that Willie does want to do right by the kid — necessary for character development. Even the theatrical release has a similarly hasty pace, especially if you’ve seen the unrated version.

You’ll laugh no matter which version you see, but go the extra mile and find the one that runs 100 minutes to have a Merrily miserable Christmas.

NOTE: As of this writing, Bad Santa is available to stream on Showtime.

My review of Bad Santa 2