I hadn’t seen James Cameron’s Avatar since opening weekend in 2009. It was a cultural phenom like no other. It came through like a hurricane, immediately etching itself into the zeitgeist as a dazzling talking point. Everyone had some kind of opinion on it, mostly its visual effects. I remember discussion continuing well into 2010. Everyone anticipated a sequel would follow in a few years. Nothing ever came. Eventually, Avatar became the highest grossing film of all-time, grossing nearly $3 billion. Yet, when I ask people if they can name me one character from the film, I’m usually met with silence or stutters.

Avatar is a great film. That much is true. Watching it in the present day, on your average television screen, and without the renewed awe thanks to advance 3D technology or top-of-the-line sound system, it doesn’t captivate the way it did in theaters. How could it? It was billed as an experience and that’s exactly what it is. As with many experiences, you recall emotions and specific events more than you recall details. There are some fundamental issues with Cameron’s passion project, but none are large enough to cause great harm to one of the most ambitious films of this generation.

Within a few bustling minutes of the film’s opening, we are transported to the planet of Pandora in 2154. This jungle world is home to a native species known as Na’vi, 10-foot tall, blue-skinned creatures that gallop across the land and skies. Scientists and military alike are trying to infiltrate Pandora. The scientists, led by Dr. Grace Augustine (Sigourney Weaver), is leading a squadron of humans who can interact with the Na’vi as one of them by using “avatars” (synthetic Na’vi the humans control with their brains). The military have other plans. Led by Colonel Miles Quaritch (a snarly Stephen Lang), they want to completely obliterate Pandora and mine the land for its valuable mineral unobtanium.

Enter Jake Sully (Sam Worthington), a paraplegic ex-marine whose late twin brother trained for years to be one of the avatars selected to go to Pandora. Jake takes his place (rather inexplicably) and finds himself torn between two masters early into his service. Quartich wants the former marine to bond with the Na’vi so he can relay valuable information about their culture, which will be used to exterminate it. Grace, on the other hand, wants to strengthen the lines of communication between Na’vi and humans. At first, Jake is just thrilled that he has the ability to walk again, despite being a long, lanky alien. His pervasive fumbling in this hostile world leads him to being rescued by Neytiri (Zoe Saldana), both physically and spiritually. She takes him to the “home tree,” where he must commit to learning about their culture. He obliges. He strives to become one of the “brothers” of this land, much to the chagrin of Quartich, who is plotting a horrific genocide.

You can’t talk about Avatar without talking about the sweeping visuals, still a masterclass in technology 13 years later. This was the film that truly showed the capabilities of motion capture, without the cold, dead-eyed look of characters that hampered films before it. The Na’vi look and feel dimensional; even the background characters who exist merely to form crowds or run in unison. Cameron’s camerawork is astonishing as well. Shots are conducted on such a grand-scale that they highlight the immensity of Pandora: its rivers, its dense jungles, its towering trees, their thick trunks, its harmless creatures, and its ruthless beasts. James Horner’s score is just about as much of a triumph as the visuals; “Jake Enters His Avatar World” is as good of a number as I’ve ever heard in a film. Avatar was an achievement then and it remains an achievement now.

Once the arresting visuals and artistic use of 3D wore off, audiences began to lament Avatar‘s lack of an original storyline. It’s a gray area for me. It’s unquestionable that Cameron’s opus follows the narrative blueprint of Dances with Wolves, The Last Samurai, and Pocahontas. On one hand, it’s familiar territory. On the other, it’s accessible. Cameron’s concept — equipped with its own language — refuses to get bogged down by its own weight. It’s democratic in a way that allows people to watch it and remain captivated and in-tuned with the plot. A project like this could’ve easily suffered from rewrites and bloated scientific jargon that would’ve rendered it an impenetrable hodgepodge. Instead, it’s as easy to follow as it’s easy in which to lose yourself. 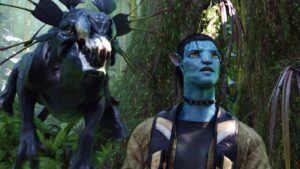 To me, its greatest fault is in the characterization — which might explain why names like Jake Sully, Neytiri, and Dr. Norm Spellman (Joel David Moore) aren’t a fraction as memorable as Luke Skywalker, Captain Spock, or Sam and Frodo. While the entire cast (even Moore) gives solid performances despite the daunting challenge of being engulfed by rampant artificiality, the characters themselves never transcend archetypal status. You have the inexperienced rookie (Sully); the know-all scientist (Grace); the selfless native (Neytiri) who just can’t help but befriend this random outsider; the gung-ho military man (Quartich); the book-smart scientist (Spellman); and the impossibly skilled pilot (Michelle Rodriguez’s Trudy). They’re two-dimensional figures in a world that’s far more developed than any of them.

Nonetheless, Avatar remains a spellbinding work of uncompromised creativity. It’s also an important reminder of the power of a singular vision, even if said vision, in this case, belongs to one of the most cerebral and significant directors of spectacle that’s ever lived.

NOTE: As of this writing, Avatar is streaming on Disney+.

My review of Avatar: The Way of Water