John Hough’s American Gothic was one of many low-budget horror films I discovered when I was about 11-years-old while wandering the aisles of Family Video. Such aimless excitement led me to discover other oddities, such as Tremors, Uncle Sam, Jack Frost (not the cuddly Michael Keaton movie), and Santa’s Slay. Oddly enough, despite recognizing the cover-art’s slick parody of Grant Wood’s iconic painting, I didn’t bother watching it until many years later.

Fast forward 15-or-so years later, and en route to visiting my girlfriend’s family, I realized she lives near Eldon, Iowa, where the house Grant Wood used in his famous painting is located. Seeing the house in person, taking several photos, and being a shameless tourist last weekend led me to rewatching Hough’s unassuming slasher, released direct-to-video in 1988. Fun fact: the museum adjacent to the “American Gothic House” as its known harbors a small little poster of this film as an example of the painting’s ubiquitous parodies in pop culture. Its inclusion almost certainly saved the staff-member a bizarre exchange with me about the film’s existence.

Despite harboring no tangible connection to Wood’s immaculate depiction of a farmer and a daughter in front of their rural home, Hough’s American Gothic is more ambitious than you’d expect. Its atmospheric despite its shoestring budget, as it captures the overcast grayness of a coastal locale, and eventually, a remote island, in a way that’s arresting from the start. The story begins with Jeff (Mark Erickson) picking up his wife, Cynthia (Sarah Torgov), from a mental hospital, where she’s been for an indeterminate amount of time following the accidental death of their newborn baby. She still harbors guilt and trauma over the incident, while Jeff hopes a vacation alongside their mutuals (Caroline Barclay, Mark Lindsay Chapman, Fiona Hutchinson, and Stephen Shellen) will be just what she needs to get herself realigned mentally. 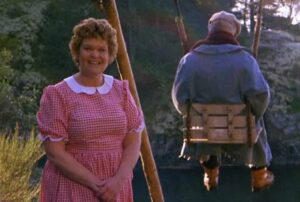 The crew takes a floatplane out to their destination (where to, is anyone’s guess), but engine troubles force them to land on the aforementioned island. The sizable slice-of-misery is inhabited only by one bizarre family: a couple, known only as Ma and Pa (Yvonne De Carlo and Rod Steiger, who were both Hollywood royalty at one time), and their overgrown children, Fanny (Janet Wright), Woody (Michael J. Pollard), and Teddy (William Hootkins). This family is peculiar from the jump. Scratch that: downright haunted. The children all appear to be well-into middle-age, but act like toddlers, and Ma and Pa have strict rules for these six strangers, despite allowing them to spend a day or two in their home. They must sleep in separate beds, and they must abide by their strict religious customs. They must also be content with being brutally murdered one-by-one, but nobody in the family has the heart to tell them that.

While the cast of corpses-in-waiting is an unremarkable ensemble — save for Torgov, who does some spooky, expressive acting with her wide-eyes — the family is played with a lot of poise. They instill terror ostensibly with so little effort. Steiger’s patriarch is my favorite, with his constant biblical word salad and devoutly moralizing ways. Wright gives Fanny the eerie edge her character needs, as she’s able to go from blubbering to giddy at the drop of a hat. Her best scenes come when she’s caring for a decrepit infant corpse she calls “her baby,” which sends Cynthia into PTSD every time she comes in contact with it. Pollard and Hootkins play the man-children with all the arrested development they can muster, while De Carlo’s Ma spends most of her time knitting on the porch — even when she’s passive, she’s still a presence.

American Gothic doesn’t do much with its setting other than make it look ominous, however. Viewers expecting the presence of an out-of-place Gothic-style window will be disappointed. For most movies, you’d be justified in saying this film peaks at its poster. A roster of veteran character actors and some elegantly conceived visuals, thanks in large part to cinematographer Harvey Harrison, at least prevent the film from being a complete misfire. This is a far more intriguing horror film than it has a right to be.

NOTE: As of this writing, American Gothic is now streaming on Tubi, free of charge.