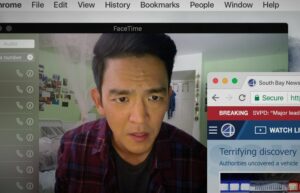 If Aneesh Chaganty’s Searching was released ten to fifteen years ago, at the dawn of an internet that was becoming more prominent in the homes of everyday folks, it might’ve been seen as overblown. Why would anyone want to video-chat with strangers, let alone wire funds/bank online? Why would anyone think to meet someone with whom they’ve only communicated virtually? It might all seem too unrealistic, or too incredulous to comprehend. I was just talking with a coworker about how everything we were told not to do as children — don’t talk to strangers, don’t get in a random person’s car, and don’t meet up with people we speak to online — most of us do every day; especially if we use Facebook, Uber, or any of the umpteen dating sites out there.

In 2018, however, Searching is a rude awakening, or rather a reminder, of a new reality. It’s not so much fixated on the fact that the world has more mysterious disappearances and abductions than the likes of 20/20 and Dateline can keep up with, but that there is an ever-increasing duality between a person’s “real” life and their online/”social” life as well. It’s a bothersome thought that our spouses and children have completely different presences online than they do amongst the people that truly love and care about them, yet in this world, with digital escapism so rampantly accessible, anything goes and anything, as we’ve seen, certainly will.

Searching is an immaculate thriller from newcoming director Aneesh Chaganty (who also wrote the film alongside Sev Ohanian). Conducted entirely on smartphone and computer screens, the film opens with a montage fit for a Google/YouTube commercial, showing an eloquent compilation of early 2000s domesticity that is the life of the Kim family. A nuclear family comprised of father David (John Cho), mother Pam (Sara Sohn), and their young daughter Margot (Michelle La), they grow together and share their memories, most involving Margot’s adventures, on the internet. We are shown in beautifully nuanced and blunt ways, which prove poignant, that Pam gets sick with lymphoma and eventually succumbs to her illness.

Cut to not long after Pam’s death and David wakes up to several late-night missed calls from Margot. He goes about his day trying to get in touch with her, but can’t, and soon realizes that she’s been taking his monthly $100 allowance for piano lessons and has recently withdrew $2,500 and disappeared without a trace. After several hours of panic, he reaches out to the police who get him in contact with Detective Rosemary Vick (Debra Messing), an accomplished law enforcement veteran determined to find his daughter. David winds up sifting through Margot’s numerous accounts online; everything from her email, Tumblr, and Facebook, where he contacts nearly all of her friends, is intensely examined by both him and Vick. Slowly, David comes to the realization that he did not know his daughter like he thought he did; the little girl with whom he watched The Voice and ate dinner ostensibly had a completely different agenda she kept hidden from him. 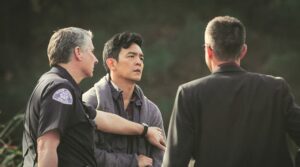 Searching is a grade-A nail-biter that sits comfortably alongside Denis Villeneuve’s Prisoners and David Fincher’s Gone Girl as one of the great mystery-thrillers of this decade. Dismantling the seemingly broad belief that so-called “internet movies” are oft hokey and gimmicky, Chaganty has a Hitchcockian way of making fierce keyboard clacking and frantic clicking the music of a modern thriller. Dashed in for good measure are moments of subtle, internet-related humor (a live-video buffering during a suspenseful moment, Margot clicking an ad and infecting her parents’ new Windows XP-computer) with credible family drama, all of which elevating a film that not only evades being a run-of-the-mill thriller but one you could argue is in a class of its own.

A big part of Searching‘s success is thanks to John Cho. The veteran character-actor who delivered a career-performance in last year’s Columbus gives one I’d call Oscar-worthy as a passionate father who must deal with a heartbreaking event no one would wish on their worst enemy. Cho gives an everyman vibe to his character, being warm in his fatherly intentions, but also coming off as square when texting his daughter hastily worded/reworded reminders to take out the trash. Yet when he becomes so deeply involved with finding his daughter, exhausting every angle to the point where he questions his own brother (Joseph Lee), he reminds you that not “everyman” could’ve played this part. Again, his performance is as significant and as compelling as Paul Dano’s in Prisoners and Ben Affleck’s in Gone Girl. Now let’s proceed to give him the ovation he deserves.

Part of what makes Searching so compelling — beyond the obvious near-flawless conceit that is Chaganty’s handling of a picture with such immaculate detail right down to the “blocking,” so to speak of tabs and windows as opposed to human beings — is how familiar it is to our senses. So many of us regularly use the internet. So many of us know all too well of its dangers, hazards, and scary crevasses. Even in our embracing of this profound medium, we caution ourselves when we hear stories like Margot’s, as if we’re going 90 mph in a 55 mph only to speed up once again when we’ve cleared the speed-trap. Keep on trucking, but don’t forget to keep your eyes open.

NOTE: Searching is available to rent on various streaming platforms.