Dir. Nick Johnson and Will Merrick 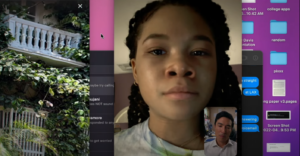 Aneesh Chaganty’s Searching was a captivating thriller set entirely on computers and iPhone screens. It belongs to a genre known as “screenlife,” which has gained some momentum ever since. The approach can admittedly be clunky, requiring intense suspension of disbelief that someone always has FaceTime or a webcam running on their desktop. But one of the many ways Chaganty’s film succeeded was that it didn’t draw attention to this fact. In a sleight-of-hand-esque way, it made you forget the situational conveniences because the central mystery was so involving.

Now, we have Missing, and Chaganty and collaborator Sev Ohanian are merely producers and story credits. Nick Johnson and Will Merrick take the reigns as the writing/directing duo. Like any sequel to a runaway success, Missing practically has red flags and caution-tape draped around its very existence. However, those warnings disappear relatively early as you realize that Johnson and Merrick are loyal to the concept of Chaganty’s sleeper hit and not much else. They’re keen on giving you similar thrills and making you an active moviegoer with an entirely different, more complex story. Prepare to be anxious all over again.

Well-plotted from the jump, Missing is more of a standalone, in-universe follow-up as opposed to a continuation of the story from Searching. For example, it starts with June (Storm Reid), a Los Angeles high-schooler, who is watching a reenactment of the climax of Searching, which is part of a Netflix true-crime series called “Unfiction.” The callback is subtle and sly.

June’s mother, Grace (Nia Long), is a single parent, who is guilty of helicoptering over her daughter. Things haven’t been the same since her husband/June’s dad died, especially now that June is at that age where her mother seems like the least-cool soul on the planet. Grace is planning to leave her daughter home alone while she goes on a trip to Columbia with her new boyfriend, Kevin (Ken Leung, Old). June and her best friend Veena (Megan Suri) use Grace’s departure as an opportunity to throw a secret, low-budget rager at her home. 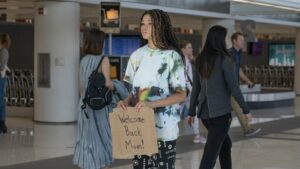 The next day, when June arrives at the airport to pick up Grace and Kevin, they never show. After several hours, June goes back home and gets to work. Even though it’s merely been five years since Searching was released, technology has of course advanced. June uses Google Street View, tracking devices, and encrypted chat-apps in order to find her mother. She uses GoNinja and outsources boots-on-the ground assistance from a friendly Colombian local named Javier (Joaquim de Almeida) when international red tape curbs FBI Agent Park’s (Daniel Henney) investigation.

Missing packs more twists and turns than its predecessor, some of which admittedly incredulous. But it’s difficult to get wrapped up in specific plot-threads when Johnson and Merrick — editors of the original Searching — so deftly transition from FaceTime calls to smartwatches to desktop notes to Ring doorbell cameras. Their story is laced with multiple red herrings, and even the most savvy consumers of true-crime docs might have a difficult time staying ahead of this serpentine saga.

With the former editors now calling the shots, Arielle Zakowski and Austin Keeling are up to the challenge of making this follow-up another masterclass in digital tension. It’s truly incredible how, in the right hands, the average computer screen can become a playground of storytelling, character development, and suspense. The blocking tactics within aren’t so much the performers’ jobs, but the duties of their cursors and browser windows, which hover-over (or occasionally leave) just a glimpse of important information in view. Zakowski and Keeling keep up with the film’s breakneck pace, and are crafty enough to turn simple virtual gestures (such as “liking” a text message) into a half-hearted and eventually poignant moment of regretful dismissiveness.

Both Searching and Missing envelope us in a new world, not so much by moralistically cautioning us about the obvious dangers of the internet, but by reminding us how most of us leave digital artifacts of ourselves everywhere. Whether it’s online purchases, messages on social networking sites, or files we’ve uploaded to the ephemeral cloud, we constantly leave fragments of our inner-selves and our underlying humanity, for better or for worse, all over this landscape to the point that we must start to see ourselves as leading two very different lives. The crux of Missing is June beginning to realize she doesn’t know a thing about her mother, her mom’s boyfriend, or her own personal story at all. By the time she reconciles this fact, it might be too late.

Therein lies the rub of a sequel that, against some heavy odds, is as good as the film that came before it — which just so happened to be the screenlife genre’s gold-standard.