Indiana Jones and the Temple of Doom (1984) review 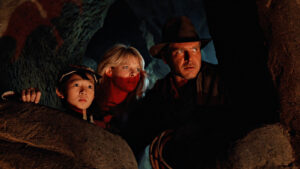 Even for cinema’s most accomplished technicians, Indiana Jones and the Temple of Doom proved to be a challenge. Making a sequel to one of the most acclaimed films of the year — which would go on to define the action-adventure genre even in the immediate aftermath of its release — was an order so tall, hindsight says some leniency in initial reception should’ve been allowed. But with expectations soaring into the heavens amid the birth of a new cinematic hero, Temple of Doom was justifiably considered the movie of the summer in 1984.

The passage of nearly 40 years has been both kind and unkind to Temple of Doom. Judging from websites such as IMDb and Letterboxd, it curries more favor than the initial mixed reactions it did upon release. But its story’s ingrained prejudices and substantially darker tone make it the black sheep of the franchise. I was delighted by its kinetic action sequences, its overall set design, and the chemistry between Indiana Jones and Short Round (Ke Huy Quan). By the end, I realized I was tolerating almost everything else.

This sequel is actually a prequel, beginning in 1935 Hong Kong. Indy (Harrison Ford) finds himself mixed up with a Shanghai crime boss, but survives a poisoning attempt swiftly enough to make his escape. It’s the pint-sized Short Round who picks up Indy and a nightclub singer named Willie Scott (Kate Capshaw). The three go from car to cargo-plane, and eventually crashland over the Himalayas. Once they wind up in India, the leaders of a small village inform them that they are in search of a magic stone. Once again, after surviving the impossible, Indy is compelled to find this stone. The trio become ensnared in the Thugee cult, who not only possess more than one stone, but also enslave children.

We should’ve known this follow-up to Raiders was going to be notably darker when it began with Indy being drugged. Absent from Temple of Doom is the light-hearted pulpiness inherent to the success of its predecessor. Replacing the sun-saturated landscapes of the desert are the macabre, subterranean depths of a land God forgot. This is an uncommonly brutal blockbuster: filled with homicide, child slavery, fire, carnage, and a handful of exotic dishes. The Empire Strikes Back is one of the most famous sequels that took a series in a significantly darker direction. Where it succeeded on adding depth to the narrative, Temple of Doom goes backwards in time, and halves the freewheeling joy of the film that came before it.

Not aiding its cause is a comparatively lackluster barrage of supporting players. Raiders got audiences to buy into Karen Allen’s Marion and John Rhys-Davies’ Sallah only to ditch them for lesser individuals. Short Round has his moments. At times, his line delivery can only be achieved by the ripe innocence of a child. He steals the scene when Indy and his boy-companion argue over who is cheating who in a game of poker. Willard Huyck and Gloria Katz’s screenplay inspires enough emotional capital between the two that their mutual fear for the safety of one another is deeply felt in the climax.

But threatening to soil much of it is Kate Capshaw, whose character of Willie is heinously insufferable. For the first half of the movie, it’s as if Huyck and Katz are making a comedy, with much of the humor deriving from Willie being a fish-out-of-water, unable to adapt to a jungle laced with snakes, owls, elephants, and unfortunately-placed bodies of water. It’s been iterated by Lucas and Spielberg alike that Willie was supposed to be a parody of the damsel in distress archetype commonly found in American serials. Well-intentioned, maybe, but Raiders got us accustomed to a female protagonist who didn’t need Indy’s helping-hand, as if she were a computer-controlled video game character who couldn’t operate for more than a few seconds without getting stuck. Temple of Doom‘s sometimes oppressively dark tone doesn’t give you the impression neither satire nor homage is at the forefront of the film’s mind. As a result, Willie doesn’t help the story nor the chemistry of the character.

As fate would have it, her presence was good enough for her to become Spielberg’s wife. Any man who has fallen in love would say an average sequel was a perfectly fine price to pay for such happenstance.

Like Indy saving Willie from the umpteenth obstacle, Indiana Jones and the Temple of Doom is rescued by its action sequences, none better than the famous railroad cart sequence, which enthralls no matter how many times you’ve seen it. The idea of a sequel “going bigger” breaks even some of the most promising works, so it’s a testament to the careful hands of its curators that this one can send three individuals careening at high-speeds, send Indy’s boots up in smoke, and then still find the energy and pacing to send them on a rocky cliff with rushing water spewing out of caves — and later, across a rickety, wooden bridge. The atmosphere of Temple of Doom, even as it becomes more entrenched in darkness, still finds ways to rivet. The sum of its parts still add up to entertainment, which is what prompts us to seek these films out in the first place.

NOTE: As of this writing, Indiana Jones and the Temple of Doom is streaming on Paramount+.