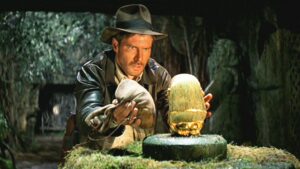 As fruitless as debating what is/might be “the greatest film of all-time,” I wouldn’t balk if you said Raiders of the Lost Ark. This is a top-to-bottom flawless motion picture, unrivaled in a crowded genre of imitators and unsubtle attempts to replicate its divine simplicity and high octane action. In the opening scene alone, we are treated to delightful cinematography, impressive effects, and a nail-biting setup combined with extraordinary music to foreshadow the string of events that will follow. Be it 1981 or 2023, it’s as impressive as it ever was.

Following a Hawaiian vacation with none other than George Lucas, right in the middle of the success of Star Wars, Steven Spielberg was convinced the two young visionaries had to work together. It only seemed like a logical next-step. Spielberg had recently made Jaws and Close Encounters of the Third Kind. Both men were still boyishly captivated by their mutual love for early action serials. For as ubiquitous as shows like The Lone Ranger and Treasure Island were on TV sets, the motion picture landscape favored the sensibly suave movements of James Bond. Almost any franchise-hopeful of the era had to abide by a similar structure and approach, especially if they chose so bravely to incorporate Nazis.

But Star Wars was the defiant rulebreaker in changing the landscape for science-fiction. Raiders of the Lost Ark continued to rewrite the rules by recreating Indiana Jones, an intelligent but frequently messy hero whose immortality was only complemented by his lucky breaks. Consider the aforementioned opening scene where he narrowly avoids tarantulas, pits, lethal spikes, arrows, and eventually, an enormous rolling boulder — only to lose the coveted golden idol not to some advanced boobytraps but to his rival, René Belloq (Paul Freeman).

The concept of Raiders of the Lost Ark is simple: make the audience ponder how the hero will escape certain peril when the metaphorical walls are quickly closing in on him. The plot and its deceptively wry symbolism functions both as intriguing background and a catalyst for a lot of close-calls and rousing action setpieces.

From Indy’s failed retrieval of the idol in 1936, he is contacted by two government officials who inform him that Nazi forces are excavating Egypt in search of the Ark of the Covenant. Hitler wants the Ark in order to strengthen his own army. His quest to obtain it before the Germans do leads him to an old friend in Marion Ravenwood (Karen Allen). From there, it’s off to Cairo, where Sallah (John Rhys-Davies) tips him off about a Nazi dig-site overseen by Belloq. From there, screenwriter Lawrence Kasdan (working off a story written by Lucas, Philip Kaufman, and an uncredited Spielberg) posits a race between the two men.

Raiders of the Lost Ark is breathless entertainment. Up to the task of making Indy likably human is Harrison Ford, who doesn’t try to take any of the thrills away. Some actors would’ve used the assortment of knives, whips, and a fashionably leather jacket as an opportunity to showboat. Not Ford. Instead, he’s a sturdy central force for a film defined by its ability to segue smoothly from fist-fights and gunshots to the famous truck chase sequence, and eventually, a dimly lit, enclosed pit of snakes.

In his “Great Movies” re-review of Raiders of the Lost Ark, Roger Ebert brings up the idea that the film, despite being widely enjoyed, often sees its analysis shortchanged. After all, Spielberg has had enough profoundly great movies to satisfy two careers, and the debut of Indiana Jones coming between Close Encounters and E.T. the Extra-Terrestrial might suggest it was more of an entertaining diversion for the director — even if his “entertaining diversions” are more elaborate and substantial than the daydreams of other directors. Spielberg’s love for action serials is only rivaled by his giddiness to slyly stomp on the legacy of Nazi Germans. Perhaps no wryer is that seen than when Indy grabs the hood ornament of a Mercedes and snaps it off, or when a plethora of Nazi gear catches fire inside a lumber crate. In modern times, it’s a callback to a period where major movies didn’t need soapbox political diatribes to confirm what side of the aisle they were supporting, or who the filmmakers were ultimately smiting. Spielberg and company use these fragments to both serve the plot and give attentive viewers something to smile at while they’re treated to some of the finest action sequences for which they could ask.

But you need not look too deeply into Raiders of the Lost Ark to appreciate its many surface qualities of being a joyous celebration of spectacle, deftly handled blockbuster formula, and a filmmaker young enough to harbor exuberant nostalgia but mature enough to present it to his audience so masterfully.

NOTE: As of this writing, Raiders of the Lost Ark is streaming on Paramount+.