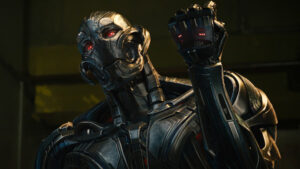 The Avengers films, and the films of Marvel in general, play less like films and more like large-scale business investments that need to churn an unfathomable amount of money (think north of $1.5 billion) to even be considered a success. When film becomes that expensive and driven by finances, to me, it’s no longer an act of entertainment but an act of business and a potentially crippling investment. The Marvel brand, in general, while showing no signs of letting up at the box office, has made me weary over the last two years, as I’ve been straining to find a great deal of satisfaction in most of the two to three superhero films released every year. To call this genre much of a muchness is still shortchanging in how its repetition hurts the individual impact of each of these films for me.

Joss Whedon’s Avengers: Age of Ultron, I thought, would be the exception; after disillusionment with Captain America: The Winter Soldier, The Amazing Spider-Man 2, and Iron Man 3, I was hoping I’d emerge from the sequel gleaming with joy as I did with the first film. However, Age of Ultron doesn’t escape the same kind of issues the former films had; familiarity continues to breed contempt, repetitive quips and attempt at humor distract from core character relations, and candy-colored action that undermines the talent at hand.

The film concerns the same Avengers team as last time: Iron Man (Robert Downey, Jr.), Captain America (Chris Evans), Thor (Chris Hemsworth), Hulk (Mark Ruffalo), Black Widow (Scarlett Johansson), and Hawkeye (Jeremy Renner) all assemble once more to make up the beloved superhero team. However, this time, the team needs to find a way to assemble and be strong enough to take down Ultron (James Spader), an artificially intelligent villain who is created through technology to try and erase human extinction. Even with six of them, however, the Avengers find themselves still underpowered in the face of Ultron’s immense technological presence. The film concerns their efforts to take down the villain, whilst coming to realize just what their lives and existence means for the face of humanity.

The original Avengers packed in some terrific character relations; it was fascinating to see how all these superheroes would interact with one another, constantly trying to one up their peers and stand tall in the face of everything. Guardians of the Galaxy worked to expand this feature in a sillier way, but still worked on the level of helping us relate to these larger than life figures. One scene in this film, I recall, has these characters interacting at leisure, and it takes place in a lavish penthouse after a party with all of the Avengers attempting to lift Thor’s hammer. Whedon goes for the kill with this film, infusing a great deal of action sequences rather than focusing on the graceful character presence that made the first Avengers so fun. In both that film and Guardians, we felt like we were hanging out with these heroes; now, we’re back to passively observing them at work.

With that, it’s amazing to see Whedon, who kept the humor in the first Avengers to a minimum, only pulling it out on certain occasions, usually to great effect, rely so heavily on quips here. It seems nearly every scene has to end with some kind of forced jab or one-liner, especially a desperately unfunny recurring joke made by Captain America in the opening scene about the use of bad language. These kinds of things only distract from what Whedon does well, particularly here, where those things are masked by other, lesser features.

For one, Whedon continues to prove, from both a screenwriting and directorial standpoint, that he can juggle chaos. Whedon can handle about five or six things going on in terms of tying them together when the time comes and capturing such chaos as it’s unfolding before us. Sometimes, one needs to just sit back in pure awe at the camaraderie occurring before us and marvel at its visual coherency thanks to Whedon’s careful hand. In addition, The Avengers addresses the weaknesses of the team, despite having six superheroes working together. The invincibility element of Marvel superheroes has continuously been a distracting element for me, with each passing Marvel film, in that I rarely feel a sense of danger for these characters because it seems as if nothing can stop them.

In Age of Ultron, we actually see the Avengers struggle to adequately assemble to take down Ultron, even going as far as to vacationing to a resort in order to further strengthen and develop. This element of questioning just how strong these six heroes are is something that this extended universe needed.

Avengers: Age of Ultron, especially for possibly setting forth new standards for blockbusters in terms of budget, gross, and scope, is still an underwhelming experience. For a film so grand in its vision and limitless with its roster, it feels so grounded in routine, Marvel formula, so much so that the end battle treads dangerously close to not only being boring but riddled with the same kind of Transformers-esque excess that, again, could set a dangerous precedent. Whedon must be admired here, mainly for his craft at handling a great deal of things going on in unison along with his efforts to question the Avengers’ invincibility, but considering this is time when the series should take off in the way of The Empire Strikes Back, the fact that it wobbles and fizzles in impact is a tad frightening.