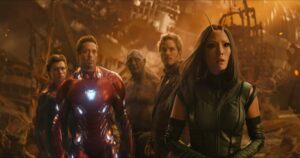 Avengers: Infinity War is the long-awaited culmination of ten years of careful plotting and strategic marketing on part of Disney and Marvel. For that alone, its existence should be commended for the sole fact that in an industry defined by the bottom-dollar, Marvel was successful in its ability to establish a “cinematic universe,” and create hit-after-hit no matter how expensive the films got; all while retaining an audience eager to flood multiplexes in anticipation for the followup. The studio has forever changed the way blockbusters will be critiqued both as film and financial investments, and not even the most contentious analysis of Infinity War can nor will change that.

The penultimate conclusion of this chapter of the Marvel Universe (yes, it’s essentially an undisclosed “Part 1”) is essentially a 150 minute long trailer, complete with a post-credits scene. It pulls roughly two dozen characters from the gaggle of films that came before it, in turn creating the biggest (and most-expensive) crossover in the history of cinema, and again, that alone should merit some respect. In effort to keep the details of the plot minimal — because the real story lies in the analysis — we finally come to see Thanos (played effectively by Josh Brolin), the hulking despot from the planet Titan, six years after being quickly introduced to him in the original Avengers. Thanos has committed to terrorizing several planets, as well as disrupting the entire galaxy, in hopes of retrieving the six Infinity Stones that will give him ultimate control over the universe. The opening scene involves him taking the “Space” stone from a recognizable villain from movies past before taking off in hot pursuit of the final stone to insert into his gauntlet.

If you came in expecting the ultimate showdown in the form of extended battle sequences and instances of peril, Infinity War has what you crave en masse. Screenwriters Christopher Markus and Stephen McFeely abandon the pacing of the previous films in order to capitalize on the multitude of violent possibilities. Even as a prelude to the climax, much of the action is rousing in its presentation, captured with a distinctly different sense of choreography under the tutelage of Captain America: The Winter Soldier directors Anthony and Joe Russo than previous director Joss Whedon (who, let it be known, did great as well). The Russo’s desire for versatility in staging the fight sequences using a welcomed mix of closeups and long-shots gives the familiar a feeling of freshness, even if we’re ultimately witnessing the moves we’ve come to expect from some of the veteran heroes, such as Iron Man.

The disruptive force in Avengers: Infinity War is a similar one that existed in Age of Ultron, the ultimately disappointing followup to the first big team-up movie, which I still stand by as the best of this trilogy. The issue is the script, which is burdened by an infuriating amount of cartoon humor, to the point where few scenes exist for what their sole purpose should be — to show the gravitas of the moment. The dramatic tone of this film is offset to the point of Markus and McFeely suggesting that Thanos’s takeover is one big joke to be laughed at, thanks to the incessant need for every scene to include or result in a feeble, forgettable punchline. There’s a scene between Stark, Parker, Drax (Dave Bautista), who comes close to being as insufferable as Justice League‘s Flash, and Star-Lord (Chris Pratt) that has the gang debating whether or not Footloose is one of the greatest films of all time while they’re in the midst of forming a strategy to strip the power from Thanos. Furthermore, any scene the Guardians are present seems to grind the film to a halt, as the rag-tag group of “jackasses” have now become the bane of plot-progression more than anything.

The frustratingly jokey mood the film keeps trying to adopt at the worst possible times makes The Last Jedi appear as if you didn’t have to include “comedy” as one of that film’s additional subgenres. Obviously, there’s nothing inherently wrong with light-hearted humor, but the extent in which Markus and McFeely go overboard makes Infinity War very difficult to accept as a high-stakes drama — what the third-act clearly wants it to be. Impacting moments do indeed exist, and there’s one between Thanos and Zoe Saldana’s Gamora that could reasonably be considered one of the best scenes in any Avengers film. But when bookended between scenes that have the screenwriters searching for their next opportunity to undermine the dramatic heft of their script, they can just as quickly be discarded as a bit where Ruffalo’s Banner calls his alter-ego “an asshole” when under duress.

Another issue with Infinity War is more expected and that’s the difficultly of writing a film so stuffed with characters, some of whom could still use more development in another solo movie. The interpersonal relationships one can quietly hope to see, such as Stark’s sarcastic edge rubbing the prankster Guardians the wrong way or King T’Challa looking at the persistent clumsiness of Parker’s Spider-Man or questioning Rogers’ intentions with mild annoyance, are minimized to scenes that are interstitial to the larger action setpieces on display. Valuable interactions between characters are limited in the film, and relationships that do manage to materialize are nothing short of surface-level. In The Avengers, a sense of cooperation and teamwork prevailed, even during the chaotic finale, and it was something still mostly present in Age of Ultron, despite the heroes’ invincibility inspiring doubt despite the strongest suspension of disbelief. In Infinity War, moments of cooperation amongst the characters are present in a far more manufactured sense. The end result feels like a chess-match between Markus and McFeely, who succeed in keeping the characters moving but rarely bonding.

All that said, the film follows Black Panther in a very laudable way and that’s its choice to make a villain we can believe in just as much as the heroes. Thanos’s motives might not be as socially relevant nor as engrossing as Killmonger’s, but the fact that they are refined for the underlying emotion embedded in them as much as they are shown in action is proof that Marvel is determined to fix a recurring problem with their films. Thanos is given life by Josh Brolin, in one of the actor’s best roles to date, and it’s partly due to his power over all the Avengers, even as a team, that gives Infinity War the glorious angle that this franchise is coming together.

It’s this reason and more that the film will be satisfying to most who have stuck it out this long and will certainly be chomping at the bit to find out how it all concludes around this time next year. Avengers: Infinity War is mostly enjoyable, nonetheless burdened by the respective screenwriters doubling down on two elements that make the overall film too frequently irritating. Even with these gripes, it will ultimately be better judged in context of the followup next year. Right now, it’s undoubtedly incomplete and leaves us drying our eyes in a fit of impulse we cannot shake until the particles have been reformed and the just forces earn their victory.