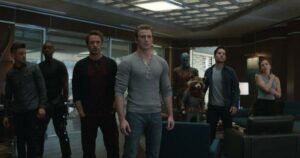 An epic 11+ years in the making, featuring some of the most memorable characters in a decade and then some, Avengers: Endgame is a satisfying conclusion that accomplishes what it needed to and a little bit more. The way it attacks daunting expectations and grandiose world-building head-on is alone laudable, but after distilling down what I’m sure many will agree this finale needed to bring to the table, it makes it that much more impressive. In the end, it was all about rewarding the commitment of devoted fans, young and old, who have given a part of themselves to this franchise over the last decade. With that, Endgame remains committed to pleasing those who took this odyssey, and brings forth a subtle reminder that we may never see a series like this again.

The finality of it all is a bit surreal, especially for those more loyal than myself, who have seen every installment of the series (I still am late to the party on The Incredible Hulk and the Thor trilogy). At three hours in length, this film is so rich with characters, motivations, and personalities that it demands a rewatch solely for how inevitably bloated it was always going to feel. Despite a marginally cheap plot device at its core (that the film makes no quibbles by poking fun at its very existence), which opens up a lot of holes in the continuity of the franchise, Endgame packs a lot of laughs, maybe even some tears, and a grand emotional payoff. At this point, if you staunchly dislike the film, you probably were never sold on the series from the jump.

As I settled in for my showing of the film, one of the many faces in a sold-out crowd of dozens, I reflected on my own time invested in this franchise. My eyes drifted around the auditorium and saw everyone from toddlers to seniors, folks of all races and generations with different, unspoken connections to the material. Maybe some of them could recall the thrill of seeing the first Iron Man film in theaters. Maybe some wanted to see what all the hype was about, and have a spotty track record of keeping up with the 21 Marvel films that came before this one. In the end, it doesn’t matter. Your enjoyment of Endgame will indeed vary based on your own involvement with the series, but even for folks such as myself, who have been pretty proactive in seeking out film-after-film in the MCU, it delivers a satisfying conclusion with all the components necessary to make you nod in affirmation at time well spent.

Faithful readers will recall my mixed feelings for Avengers: Infinity War. Do not forget that Endgame was once going to be called Avengers: Infinity War — Part 2, and even though a title-change made it a lot more attractive, optically speaking, it doesn’t change the fact that Infinity War was still groundwork for the finale; a film that’s peak value came within the last year, as speculation was almost impossible to escape. I’ve always looked at “Part 1” films as a necessary evil, and in this context, Infinity War had to exist for reasons attributable to both narrative context and Disney’s bottom dollar. But it paved the way for a tight and gripping film, so any sin is mostly forgiven as far as I’m concerned.

I’ll keep talk of plot to a minimum, for reasons I feel are self-explanatory. Infinity War concluded with Thanos (Josh Brolin) finally obtaining all six Infinity Stones and using the power of them and the “Infinity Gauntlet” to wipe out half of existence, taking Black Panther (Chadwick Boseman), Star-Lord (Chris Pratt), Spider-Man (Tom Holland), Groot (voiced by Vin Diesel), and more of our favorite heroes along with it. Endgame picks up several weeks after Thanos fatefully snapped his fingers, where our surviving heroes Tony Stark (Robert Downey, Jr.), Steve Rogers (Chris Evans), Bruce Banner (Mark Ruffalo), Natasha Romanoff (Scarlett Johansson), Thor (Chris Hemsworth), Clint Barton (Jeremy Renner), Scott Lang (Paul Rudd), and Rocket (voiced by Bradley Cooper) in a state of dread. In a pleasant tone-switch from the previous installment, our heroes feel like actual heroes, albeit vulnerable and unsure of their methods, which is exactly how I’ve long wanted them to feel. The surviving Avengers band together and attempt to stop Thanos through time travel, which effectively allows us to rewatch famous scenes from previous films of the MCU and feel like we’re revisiting old friends as the desperation on part of our heroes intensifies.

In the trusted hands of directors Anthony and Joe Russo and screenwriters Christopher Markus and Stephen McFeely, who have all proven they are more than capable of handling large ensembles with tall orders, Avengers: Endgame is jam-packed with the thrill of a rollercoaster and the heft of a superhero soap opera. Even in the dramatic bits, which help elevated the film overall, Endgame remains intriguing and, at times, cerebral. This is new territory for the MCU, on top of being a huge display of interconnected storylines, and the Russo’s keep the action and interactions clear and focused while Markus and McFeely devise banter that has weight, even in its most humorous instances.

In some ways, what you ultimately get out of Avengers: Endgame is what you put into the series. That’s not a light statement. A film this good shouldn’t be described as a “get what you bring to it,” but by now, Marvel has earned our trusts as fans. They continuously deliver the finest in superhero entertainment, as fatiguing as it can be, and seeing pivotal moments like Spider-Man and Iron Man embracing, and the real helplessness of our heroes is only more favorable if you’ve felt a connection to these characters. Even someone such as myself, who has had mixed-to-positive opinions on the Avengers franchise specifically, I’ve spent so much time watching these heroes and involving myself in their plotlines, that to see it all come to a tentative finish is both satisfying and saddening. I’ll put it this way: I wouldn’t have wanted not to have been enriched by such a complex and fascinating universe for about half of my life.

One more thing. Something also came to mind as I settled in for Avengers: Endgame, and that’s the late, great Stan Lee, whom we lost just in November 2018. For him, it must’ve been truly indescribable, just about beyond words, to see his characters treated with such care, attention to detail, and above all, respect with all their layers and intrigue committed to a series of films, many of which I’d call very good. It’s a damn shame he didn’t make it to see Endgame, as far as I know, but thanks to the commitment of so many, his works, like the comics on which they’re based, will live for generations, of generations, and by generations.