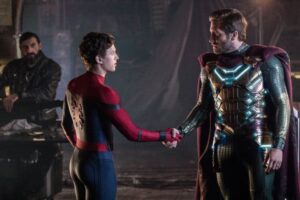 Sam Raimi’s Spider-Man 2 made the titular character’s agony of being a young hero the forefront of the story, and by doing it so well, it’s now regarded as one of the best Marvel films — deservedly so. Spider-Man: Far from Home — Marvel’s 23rd installment in its colossal cinematic universe — does something similar, highlighting the weight on Peter Parker’s shoulders after Iron Man’s unfortunate demise along with his still wishy-washy sense of priorities as a high school student and superhero. But unlike Raimi’s effort, the zippy, comedic tone present in Spider-Man: Homecoming resurfaces in this sequel and effectively cuts through the gloom.

Far from Home is a great, well-rounded sequel with boundless charisma and memorable performances from familiar faces. Coming barely two months after Avengers: Endgame left Marvel loyalists reaching for their Kleenexes so swiftly they probably pulled a muscle, it serves as an unlikely epilogue that works to put a bow on “The Infinity Saga” and begin patiently laying the groundwork for the future. The latter description might allege the film be perfunctory and slow, but this isn’t Avengers: Infinity War all over again. It’s an inessential but still contagiously entertaining mix of teen angst and popcorn entertainment. Just when you didn’t think you needed a Marvel movie crossbred with a PG-13 EuroTrip, they deliver before you even had to ask.

The film opens with a witty yet earnest “in memoriam” montage for the late Tony Stark, delicately balancing the obviously sentimental with the keenly self-aware in a way Marvel has made succeed (for the most part) over the last ten years. Interspliced is stock footage and cheeky videos that show the before/after effects of what is known as “the blip,” when Thanos snapped his fingers and wiped out half the humans on Earth. It’s an appropriate way for a Spider-Man movie to open insofar that it immediately addresses its place in the timeline, but also gives us a reason to smile as it confronts the elephant in the room.

Being that Peter Parker (Tom Holland) and his closest friends — Ned (Jacob Batalon), MJ (Zendaya), Betty (Angourie Rice), and “Flash” (Tony Revolori) — all got “blipped,” they have to repeat a year of high school, which includes taking a summer trip to Europe under the guidance of their quirky teachers (Martin Starr and the never boring J. B. Smoove). Just as he’s packing up to go abroad, Peter realizes he’s being prolifically contacted by Nick Fury (Samuel L. Jackson), but against the wishes of Stark employee/bodyguard Happy Hogan (Jon Favreau), he “ghosts” him in order to try and clear his head on a much-needed vacation. His goals on the trip range from spending quality time with his confidant Ned and trying to incite a romantic moment with MJ, but as Tony Stark’s heir apparent in a world that is lost without an “Iron Man” figure to admire, there are admittedly other priorities on his plate.

His sabbatical in Venice is interrupted by the presence of Mysterio (Jake Gyllenhaal), an incalculably powerful figure, whose powers revolve around illusion and bringing to life alternate dimensions. Peter admires Mysterio for his apparent earnestness, but any comic fan knows the element-based figure isn’t all that he seems, and an integral decision at the hands of Peter complicates this international rendezvous, not to mention his relationship with Fury.

Like Homecoming, Far from Home is very much a teen comedy template inserted into the blueprint of a superhero movie, so much so that scenes revolving around Peter’s efforts to woo the caustic MJ become as important in the eyes of the story as Mysterio himself. Writers Chris McKenna and Erik Sommers don’t handle both plot-points in an isolated fashion, however. They thoughtfully have the two converge by making Peter’s choices of tagging along with his class or suiting up to battle towering villains pose legitimate consequences for him and his status as an Avenger.

A sizable portion of Homecoming was dedicated to Peter fumbling around with his newfound powers, many of which he couldn’t execute without being a danger to himself and innocent bystanders. Some may have found it cloying, but I found it realistic, especially when you see the likes of Batman, Iron Man, and even someone as almighty as Thor reconcile and utilize their capabilities efficiently from the jump, with little difficultly. If a teenager, or anyone for that matter, really did possess such divine abilities as Spider-Man, chances are, there would be a great deal of trial and error associated with him or her finding a groove and getting comfortable in their (new) skin(suit). In Far from Home, Peter has definitely learned where and how to shoot his webs and activate his other powers, but he finds trouble in retaining a sense of normalcy, not to mention competent decision-making that doesn’t factor in what would immediately make him comfortable. This sets the larger conflict and villain of the film into play.

Once again, the cast is terrific. Holland has always confidently embraced the innocently awkward nature of Marvel’s Spider-Man, and here, he’s grown only more comfortable with his role. Gyllenhaal is so astute and measured in his handling of a complicated character that it makes you wonder why it took until movie #23 to get him in one of these projects, and Zendaya couldn’t be more likable if she was even more brutally honest in her rather nihilistic assessments of the world around her.

The final battle is a testament to Jon Watts’ strong directing, as Spider-Man must navigate through some convoluted labyrinths of a crumbling European cityscape in order to confront evil. Watts makes sure that this obligatory climax doesn’t descend into a messy, inconclusive blur of special effects by weaving his camera through the action as opposed to forcing editors Dan Lebental and Leigh Folsom-Boyd to impose a series of dizzying quick-cuts. With so much at stake, including Peter’s credibility as Stark’s protege, even the inevitable feels like it’s still out of reach during the final minutes. Spider-Man: Far from Home, in some ways, is what Captain Marvel should’ve been; a deeper dive into the psyche and tribulations of its hero that got us excited for the spectacular finale. In this case, however, it leaves me embracing what’s to come more-so now than after the credits rolled for Avengers: Endgame.