Guardians of the Galaxy review (2014) 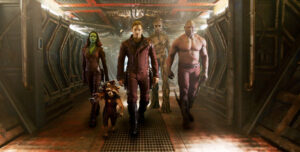 James Gunn’s Guardians of the Galaxy has a defining scene late in its runtime and it’s the kind of scene that summarizes its characters, situations, and humor in ways better than any analysis could do justice. The scene comes when our titular heroes are gathered in their bunker, confused and trying to concoct and develop more of their “12% plan.” When they finally figure something out, each character stands up to declare their participation with Rocket Raccoon standing up last. “Now we’re all standing,” he states, “a bunch of jackasses.”

That is the best summation of Guardians of the Galaxy I’ve ever heard and probably will hear. The film works largely in part because it’s a more lax, carefree Marvel film than we’ve seen over the last year or so, unburdened by the commonalities the brand has bestowed upon and the smothering sameness gift-wrapped in expensive special effects and complex pyrotechnics. While the effects and the sound engineering/mixing are nothing to shortchange or overlook, this has to be the most witty, hilarious, and consistently fun Marvel film I have yet to see, which is something the company genuinely needed in their long line of serious franchises.

The film concerns Peter “Star-Lord” Quill (Chris Pratt), who was abducted from Earth by The Ravagers in 1988, shortly after his mother’s death. Twenty-six years later, Star-Lord is wandering on the planet Morag when he finds a small, spherical orb that apparently holds enough significance that the evil villain Ronan places a bounty on Star-Lord’s head once he learns the orb is in his possession. He also sends Gamora (Zoe Saldana), an orphan who was trained by the arch-villain Thanos, after the orb. However, one afternoon, Rocket Raccoon (voiced by Bradley Cooper) and his tree-like humanoid pal Groot (voiced by Vin Diesel) see Star-Lord in public and try to capture him to obtain the large bounty. After a large, violent brawl, the quartet is thrown in prison and learn that the orb is worth several billion units. In order to obtain the units, however, they will need to trust each other entirely, which proves to be more of a challenge than it already is. They also come in contact with a large, muscular, and very literal man named Drax (David Bautista), who works to help them so they can be the noble Guardians of the Galaxy.

Director and co-writer (with Nicole Perlman) Gunn knows that, unlike with Marvel’s The Avengers, these heroes likely couldn’t sustain a feature-film on their own. However, by throwing them together, giving them numerous dialog scenes to showcase their characters’ timing and humor, and develop them each considerably with their own stories and motives, he can create a film centered around some of the most likable superhero characters. Despite being a superhero, Star-Lord is entirely human and relatable, from his sassy remarks to his love for eighties music (which leads me to believe that Redbone’s infectious jam “Come and Get Your Love” has never been used to greater effect than in Guardians of the Galaxy. Gamora shows her incredible energy through every scene, thanks to competent writing and a solid performance by Saldana, who seems to be just starting to break out of the female action hero archetype. Even Drax is the heart of some hilarious scenes, being that he doesn’t quite understand metaphors and views everything in a firmly literal sense.

But the scene-stealers are Rocket Raccoon and Groot, who compliment each other effortlessly well. Rocket Raccoon has his brash, sometimes vulgar sense of humor to back him up, consistently being an entertaining presence, while Groot’s character and conversational simplicity make him a warm and easily-lovable soul. Together, the five create one of the most effortlessly fun and engaging band of heroes that challenge The Avengers in the sense that these characters don’t appear to be impenetrable forces of nature. They’re not invincible beings and exist on a realm that can be more directly relatable to the audience. In other words, they’re the superheros for people that don’t really care for superheroes.

Marvel truly needed Guardians of the Galaxy in my mind; a casual, irreverent superhero film that shows misfit characters rather than polished ones and momentary pauses for some hilarious dialog rather than disjointed shouting and stale zingers. What Marvel also needed was a film that had a true sense of humor, rather than just infrequent winks to the camera or dopey little sequences of deadpan, which is what Guardians of the Galaxy bears in excess. This very feature is evident from the film’s inclusion of a bold, memorable soundtrack, made up almost entirely of hits from the seventies and eighties, with the heroes’ theme song “Hooked on a Feeling” by Blue Suede at the film’s center. While the battles are still pretty long and often infused with some indistinguishable chaos, this proves not to be such a distracting feature since the bulk of the film is such a royal and unexpected treat.

In a time where I, and I’m willing to bet several others, are experiencing incredible superhero fatigue, Guardians of the Galaxy provides the ibuprofen and the regeneration the genre and the audience needed.