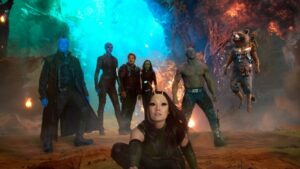 Guardians of the Galaxy Vol. 2 is the sharpest decline in quality between Marvel sequels since The Avengers and Age of Ultron, only the case we have on our hands here is greater. The original Guardians of the Galaxy was a lively affair that combined whiz-bang action with lovable misfit heroes that knew they wouldn’t get anywhere without their equally strange counterparts on which to lean. Following up such a self-referential, loose-strings picture is already tricky given the fact that audiences worry that the crew utilized all their tricks in order to get the project off the ground, leaving the looming question, “is there enough left to take flight?”

I’m not going to say no, even after being burned with this sequel, but I will say that if writer/director James Gunn doesn’t pull out his biggest ones for the inevitable Vol. 3, this will be one of the most disappointing franchises of the modern day.

The first problem with Guardians of the Galaxy Vol. 2 is just how generally low-stakes it feels for a Marvel sequel. The film revolves around the same gang of lackluster superheroes – Star-Lord (Chris Pratt), Gamora (Zoe Saldana), Drax (Dave Bautista), Rocket the Racoon (voiced by Bradley Cooper), and Baby Groot (voiced by Vin Diesel) – this time facing consequences from the sentinel Sovereign race thanks to the actions of Rocket, who steals a small collection of highly powered batteries following the opening battle. The team crash-lands in a forest shortly before realizing they were followed by a spaceship piloted by Ego (Kurt Russell), an indestructible, godlike figure who claims to be Star-Lord’s father. Bringing along his own sidekick Mathis (Pom Klementieff), a half-woman/half-praying mantis creature with strong empathetic powers, Ego takes his son, Gamora, and Drax back to his home planet, which is essentially an extension of himself.

Meanwhile, Rocket and Baby Groot stay behind in hopes to fix the ship, running into trouble when Ayesha (Elizabeth Debicki), leader of the Sovereign race, hires Yondu (Michael Rooker) and his team to recapture the Guardians. Rocket and Baby Groot wind up meeting one of Yondu’s henchmen, the repulsive and stupidly named Taserface (Chris Sullivan), who they come to defeat by repeatedly mocking him before a crowd of people on his side.

Star-Lord’s tries to grapple with the fate of his mother by reconnecting with his mother, while Gamora meets Nebula (Karen Gillan), her long-lost sister who has taken on the opposing side. Finally, there’s another one of Yondu’s associates Stakar Ogord, played by Sylvester Stallone, whose tardy inclusion in the film reminds one of how jammed Spider-Man 3 felt when Venom was introduced in the second act.

Ever since Marvel’s foray into TV shows, such as Jessica Jones, Luke Cage, and, perhaps most famously, Agents of S.H.I.E.L.D., it seems that a consequence of the comic book titan’s empire on both markets has led to weaker or lesser storylines for their primary properties, films with nine-figure budgets. Most specifically, films that don’t serve as origin stories nor as the conclusion of a long-running franchise. This explains Guardians of the Galaxy Vol. 2‘s uncomfortable placement in the middle; a film with very little narrative risk outside of characters struggling with their own identities and working as a collective after being societal outcasts for so long.

Things don’t get as angsty as they did in Power Rangers, but it’s abundantly clear after ninety minutes that this sequel doesn’t have much to add to these characters, and trying to give them convincing depth amidst assaulting visuals is a fool’s errand. Guardians of the Galaxy Vol. 2 vomits colors for the better part of its 137 minute runtime, and while they’ve chosen a soundtrack of Electric Light Orchestra, Looking Glass’s sole hit “Brandy (You’re a Fine Girl),” and even Aliotta Haynes Jeremiah’s totally awesome groove-track “Lake Shore Drive” to fit well, the reliance on kaleidoscopic visuals and action spectacle becomes quite overwhelming.

It would seem Gunn wrote this second installment with more action because of the uncertainty he had with how to wrap things up, or exactly how to foreshadow the forthcoming conclusion. The end result feels non-committal and overstuffed, brimful of a lot of violence and predestined havoc that takes a formerly promising, original film and makes it into something more commercials. Gunn feels at a crossroads with the Marvel brand, having gotten the liberty to take chances and create something brash and hilarious just three years ago, his followup feels like a compromise of wit and brand into something that couldn’t commit to either, and as a result, leaves both underserved given the nature of the material.

Fortunately, our band of characters are still mostly reliable, thought Star-Lord feels significantly muted and his energy and smart-ass qualities transferred over to Drax, who is absolutely hilarious in some moments. Consider the first hour of the film, when most of the fun occurs, where Star-Lord and Drax make an off-screen bet on what the feelers on top of Mathis’ head are used for. If they don’t involve something to do with sensing low-clearance doorways so she’s not decapitated, Drax loses the bet, but even after the predictable outcome, Drax still gets the last laugh, his raspy and noisy one I’ll add.

Furthermore, Baby Groot is used more sparingly than you might initially think. He does get a nearly three-minute showcase during the film’s opening titles, grooving to “Mr. Blue Sky” front-and-center against the many names of the immediate cast while Gunn’s camera repositions rapidly as Groot weaves through the traffic of an intergalactic battle. His role is fun and freeform, as it should be, though Rocket’s mean-spirited demeanor has manifested into something bordering on contempt. It’s as if his sarcastic humor has expired and become something more cynical than this film could adequately contain.

Guardians of the Galaxy Vol. 2 is an immense disappointment in the way it gets the gang back together, in addition to many other promising, recognizable faces, for what boils down to a parable on broken families and misfit angst. Most, if not all, of this storyline is likely to be forgotten and neglected in the following installment, and the characters are given little room to grow or be themselves when, within any given second, they’re shortchanged by Yondu, Stakar Ogord, or some other hero/villain/hero again, or needed in a dizzying battle against a backdrop of a vomited rainbow.

On a final note, Gunn has always been great at delivering fan-service in these films, still persistently claiming there is an undiscovered Easter egg in the original Guardians of the Galaxy, in the form of characters making references or cute little moments of fluff that occur in the middle of more serious circumstances in the film. This explains why those moments, which, by and large, exist during the first half of the film, succeed more-so than anything else. It’s not a detail that prompts anger on my behalf, but like a parent (or guardian) who expected more, I’m left with little else besides disappointment.