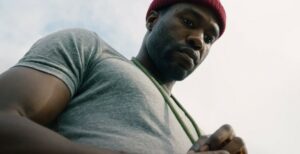 These “legacyquels,” as they’ve become known, can disappear from your mind in less time than it takes to finish one. However, with the struggles of Black America being evermore illuminated in the last year and a half, I suppose it was time to say his name again.

Candyman is a solid sequel (not remake) to the original 1992 Bernard Rose film that moved more like a gothic drama than a slasher. Ignoring the two nineties sequels that followed, it is the first installment in the franchise that diligently follows the path laid forth by the first film with a character that likely haunted almost as half as many nightmares as Freddy Krueger but still seldom sees credit. With Get Out‘s Jordan Peele as one of the film’s cowriters, along with writer/director Nia DaCosta (say her name for a change), a great deal of Candyman’s social relevance has been restored as the story returns to the roots of the narrative: Chicago’s Cabrini-Green housing project, which was demolished in 2011.

The Near North Side of Chicago — where the towering buildings of the Cabrini-Green homes once stood — has undergone massive remodeling where mixed-income townhouses and more upscale establishments exist. “White people built the ghetto and then erased it,” Brianna (Teyonah Parris), an art curator, says early. She lives with her artist boyfriend Anthony (Yahya Abdul-Mateen II), with whom she just bought one of those new, fancier apartments together. Brianna’s brother is the one who informs them of the legend of Candyman, therein outlining the events of the first film in case you’ve never seen it (fix that soon, by the way).

Fascinated by the folklore, Anthony learns more about Candyman from a former Cabrini resident (Colman Domingo), who witnessed the climax of the original film. So it goes, Candyman was an African-American in the 19th century, whose forbidden interracial love affair led to his torture and brutal murder at the hands of a lynch-mob. Not only did they saw off his hand and replace it with a hook, they drenched him in honey before he was stung to death by bees. Candyman is summoned when someone says his name five times while looking into a mirror. Anthony finds the backstory unshakably gripping, becoming consumed by the legend enough to create some works that reflect the trauma of Black people in America. He hangs a mirror in the gallery with information about the figure, and it’s then the madness begins all over again.

The concept of Candyman is that in order for him to sustain his relevance and impact, he needs people to believe in him. It’s his desire to torment and kill nonbelievers so he remains fresh in the minds of generations old and young. He’s sort of vampirical in that way, and like the original, DaCosta’s Candyman — on top of further solidifying the character as a fixture of Black plight and generations of systemic injustice — ponders the thought of collective thinking. If enough people believe in an urban legend, does it make it real? Candyman is just as much a figment of one’s imagination as he is a real monster (or antihero, depending on your perspective).

The screenplay — written by Peele, DaCosta, and Win Rosenfeld (the modern Twilight Zone) — bears the burden of trying to tell a new story while servicing an old one. How the trio of writers merge the mythology of the titular killer with the foundation of the 1992 film proves strong, no less. If anything, it feels too short, as it persists in thoughtfully building a world without ever finding the kind of pacing consistency that made the original a potboiler as much as a horror film. It too nixes many elements of psychological horror that not merely made the original film so intense, but made every death in the movie feel significant.

Still, DaCosta is steadfast in crafting a visually striking affair, enhanced by the work of cinematographer John Guleserian (About Time), who has a talent for shooting urban locations. If you come strictly for the gore, you’re liable to be a touch disappointed, as I was. The pointed balance of storytelling and bloodshed seen in Rose’s film isn’t quite achieved, with a great deal of violence happening off-screen. That being said, there is variety. Old-fashioned shadow puppets reenact past events driving home the historical context, while Candyman’s appearance in a contemporary high school bathroom is aided by some intriguing framing thanks to a pocket mirror.

It’s a daunting challenge to condense this lofty material into 91 minutes, but if there’s one thing I don’t intend to do, it’s harp on a film too harshly for having a plethora of ideas. Keep in mind that after the success of Freddy vs. Jason, we came dangerously close to getting “Candyman vs. Leprechaun,” an amalgam of two drastically different villains with incongruent approaches to horror. I’ll count my blessings insofar that DaCosta and company gave the urban legend not merely the respect, but the cinematic follow-up it so deserved.