Candyman: Farewell to the Flesh (1995) review 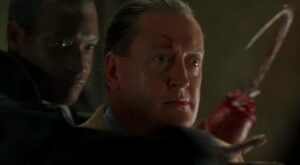 One of the secret, foundational details that made Bernard Rose’s Candyman such a dynamic picture was that actors Tony Todd and Virginia Madsen were permitted to conjure up their respective characters’ backstories. Todd helped conceptualize Candyman as a man named Daniel Robitaille, a son of a slave in the 1800s who grew up to be a respected painter. His life came to an abrupt and horrifying end when he was found to have had an affair with a white woman, which resulted in a pregnancy. As such, a lynch mob hacked off his hand, replaced it with a hook, smeared him in honey, and watched bees feast on his flesh.

One of many issues within Candyman: Farewell to the Flesh is writers Rand Ravich and Mark Kruger retconning this fact and making Robitaille a slave. We do get a flashback to Robitaille’s vicious murder, although dare I opine it was at its most horrifying when it was merely a concept? Seeing it played out as a degree of tastelessness I couldn’t shake. Moreover, the decision to make Robitaille a slave undercuts the power of the Candyman mythos. He was a well-educated Black man who met his fate at the hands of racism. I suppose uttering Candyman into a mirror five times in effort to summon him draws upon the idea of one’s own flawed, potentially racist image reflecting back at them — especially seeing as characters recite those words harboring a sense of skepticism.

Either way, Farewell to the Flesh is a piss-poor sequel to one of the best horror films of the 1990s. It sacrifices the groundwork laid by its thoughtful predecessor in favor of more conventional slasher nonsense. Gone not only are the eerie gothic elements from the original picture, but the psychological aspect as each character is a thinly drawn vessel of a human compared to the college scholars with whom we first spent time.

The film uproots its setting from Chicago’s Cabrini-Green neighborhood to New Orleans. It opens with a professor (Michael Culkin) at a signing for his latest book, a detailed account of the Candyman legend. He’s a non-believer, going as far as to stage a prank around summoning the Candyman. As he’s leaving the bookstore, he’s approached by Ethan Tarrant (William O’Leary), whose father was killed Candyman-style while investigating the deaths of three other victims. The encounter turns violent, and soon enough, the professor is murdered in a bar bathroom shortly after Candyman (Todd) appears.

Ethan is the primary suspect in the murder case. His sole-surviving line of defense is his sister, Annie (Kelly Rowan), a schoolteacher. Par for the course, the cops don’t buy Ethan’s convictions that the Candyman was responsible for the professor’s death; neither does Annie, who makes the mistake of summoning him and reaping the consequences soon after. Beyond grappling with her ill-advised decision, Annie digs deeper into the figure’s mythology and discovers a connection to her own family.

This is the kind of horror film where a character is visiting a gravesite and literally uncovers information by wiping away overgrown vines on a headstone. If that’s not enough, when one headstone reveals that the individual had a daughter, the character must also exclaim to herself, “oh, she had a daughter!”

The level of affect and nuance that complimented the gore of Rose’s picture has been traded for predictability, along with an unjustifiably slow pace that has people, namely Annie, running around in search of a clue. The New Orleans setting lacks the personality of Cabrini-Green, save for a climactic showdown at Mardi Gras because of course that finds its way into the premise.

Candyman was not a movie predicated upon jump-scares. Farewell to the Flesh is a different story. There are far too many instances where a cat or a person are mistaken for something truly sinister, merely drawing attention to the generic nature of the whole production. It’s not that Candyman couldn’t have used a follow-up. It just didn’t need one so mediocre it should’ve been relegated to direct-to-video fate.