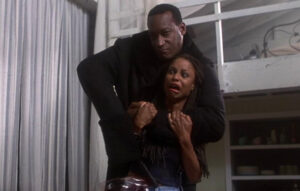 Candyman: Day of the Dead proved to be the franchise’s dying breath back in 1999. A film that broke the slasher mold just seven years prior could never find a steady track to further its uniquely powerful figure’s mythology, and instead died ignominiously on home video (unless you lived in France and had the “privilege” of seeing it in theaters).

Despite again retconning itself into total nonsense, Day of the Dead does tell a more interesting story than its predecessor, Farewell to the Flesh. It’s certainly more linear, for one, and Caroline proves to be a more investing protagonist primarily because Donna D’Errico is clearly trying to inject some emotional range into her character. That’s about where my praise stops for this needless sequel.

Taking place in Los Angeles 20 years after the events of Farewell to the Flesh, the film centers around D’Errico’s Caroline, the great-great-granddaughter of Daniel Robitaille (Tony Todd), the black artist who was tortured to death generations ago after his affair with a white woman became known. After having his hand severed and his body stung by countless bees, he lived long enough to catch one final glimpse of his lover and instilled himself in her mirror, thus having the ability to haunt future generations should they summon him by saying “Candyman” five times whilst staring at their reflection.

Caroline knows this history all too well thanks to her late mother (Annie, from the previous film). She’s committed to changing the perception of the urban legend by showing off Robitaille’s artwork at Miguel’s (Mark Rorir-Rios) gallery. The show goes well until David (Nick Corri), an actor hired by Miguel, pulls a Candyman-esque stunt and coerces Caroline into summoning the hook-handed legend. Shortly after Caroline utters his name five consecutive times, Miguel and his date are brutally murdered and their collection of paintings stolen. Signs point to David, but Caroline knows this isn’t right. There’s also a racist cop (Wade Andrew Williams), who stalks and harasses both of them when he’s not stalking and harassing the neighborhood’s predominately Hispanic population.

With Día de los Muertos serving as the backdrop, Day of the Dead‘s only intent seems to be affording Candyman another spacious playground on which to commit his slayings. The supernatural elements that tethered the original to a plane totally different than other horror films of the era are replaced by rudimentary hack-and-slash sequences. Candyman feels more akin to Jason Voorhees than he ever should’ve, with even the legend himself Tony Todd appearing to sleepwalk through another gravely underwritten affair.

With the inclusion of Williams’ racist cop archetype, coupled with the Mexican holiday being so prominently featured, writers Al Septien and Turi Meyer (also director) are gunning for deeper subtext than the likes of the first sequel. They just can’t nail the writing to support such an allegory for race nor adequately represent Southern California’s cultural melting pot without it coming off as one-dimensional. It’s too worth noting that there’s a surprising amount of sex and nudity in this installment. There’s enough where it could reasonably fit in on Cinemax’s “After Dark” block alongside softcore horror features starring Misty Mundae.

How Candyman lost its way as a franchise so swiftly is anybody’s guess. I think the reason is simple. Studio executives were unwilling to buck their own prejudice beliefs when the original film’s director, Bernard Rose, wanted to center a sequel around a love affair between Robitaille and Helen Lyle. Get this: they weren’t comfortable making a film about an interracial love affair. Nevermind that Spike Lee’s Jungle Fever came out a year prior to Candyman, did well at the box office, and received significant praise. Talk about doing a story a disservice. So, they played it safe, adopted a slasher aesthetic, and dumbed down the themes of the original that have only aged greater with each passing year.

It’s true we sell ourselves short as moviegoers. We elect to see the safer blockbuster or the sequel to a property everyone else saw before we see something that might challenge us, or dare make us contemplate the external forces at work around us. Which is why Farewell to the Flesh and Day of the Dead are the Candyman sequels we deserve. Candyman, on the other hand, deserved better.