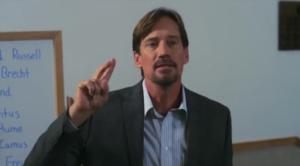 Ostensibly, God’s Not Dead bears a premise that seems so far out of reality it’s almost glaringly obscuring every good thing about it. However, it dually notes that its premise has been a reality many times before thanks to an extensive listing of court cases that show teacher discrimination against student religion or religion in general in its closing credits. Even after knowing that fact, one wonders to what extent the religious discrimination was, given some of the incredulous scenes in the picture altogether.

The film stars Shane Harper as Josh Wheaton, a well-meaning college freshman who clings heavily to his Christian faith. He has had a fortunate life with a loyal girlfriend of six years and ambitious enough to get his law degree at a prestigious liberal arts academy. His life is going on with few bumps in the road until he meets his philosophy teacher Jeffrey Radisson (Kevin Sorbo), an extremely intolerant atheist who demands that – like the many renowned philosophers – his students reject any belief or faith in God the second they step into class by requiring them to write “God is dead” on a piece of paper and sign their name. Challenging his beliefs is welcomed but not encouraged as the brave soul will have to stand in front of the crowded class and get the class and the professor himself to believe in an almighty God.

And yet, Josh wants to be this soul, refusing to sign his professor’s paper and accepting his challenge to prove the existence of God to everyone in the room. Despite the stern apprehension of his girlfriend, who feels this is a needless chore that will do nothing but come between them, Josh persists on, through threats, lectures, and smug, ego-stroking ideology on part of the professor.

Writers Cary Solomon and Chuck Konzelman also decide to weave in several other characters into this plotline, one of which involves a workaholic interviewer (Lisa Hampton) who has no belief in god and decides to make the bulk of her career getting a hold of highly-religious pop culture icons (Duck Dynasty‘s Willie and Korie Robertson in a brief cameo along with the Christian pop group the Newsboys) and asking them passive-aggressive comments about their faith. Her attitude greatly changes, however, when a tragedy comes up in her life completely reverting everything.

Other subplots include a Muslim girl, who has devoted her life to reading the teachings of Jesus Christ in private due to her heavy traditionalist father, and a pastor along with his good friend who consistently have car troubles until they decide to always have faith in the lord and savior, even in times where one wouldn’t really thing to have any. The story about the Muslim girl is realistic and often sad. The scenes devoted to detailing the car troubles is a cartoonish distraction.

When Solomon and Konzelman devote the story to Josh is when the film shines the most, though, and these unexpected subplots seem to be nothing more than pale little distractions from the film’s very intriguing centerpiece. Not to mention, the wraparound story that usually concludes an anthology by tying all the characters together in some memorable way is very thin and kind of ludicrous and feels more like product placement for the aforementioned Newsboys pop group.

With that in mind, God’s Not Dead is still a surprisingly entertaining picture. Its production values don’t suffer from the typical cheapness many religious pictures do, nor does it suffer from the preachy moralism that the bulk of the genre’s films do. It still makes the misstep and the assumption that those who don’t cling to a religion lack any moral compass whatsoever and those who do bear a religion are squeaky-clean and instantaneously moral. This idea seems to be present in most religious films and, frankly, it’s an old, tired way of thinking I’m sorry to see still exists.

The scenes where Josh is making his case for the existence and the presence of an almighty God have a great energy and insight to them and, thankfully, director Harold Cronk devotes a good majority of Josh’s story to these scenes. In addition, the performance of the hour here is Kevin Sorbo in a thoroughly convincing and ice-cold performance of a morose, arrogant professor whose practices and methods are contemptible and absolutely disheartening.

God’s Not Dead has issues, many of them easy to spot and heavily distracting. However, it’s surprisingly effective in terms of message, acting, and insight, which are three fields Christian cinema seems to struggle with the most. Bearing a soundtrack of catchy Christian rock, a strong performance by Sorbo, and writing by Solomon and Konzelman that proves not too far-fetched in the end, it’s something of an achievement for a genre that is so easily brought down by the likes of such poor, banal films.