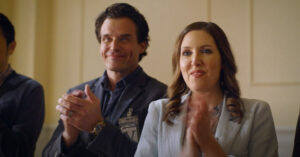 The most positive thing I can say about God’s Not Dead: We the People — the third (!) sequel to the runaway, Christian sleeper-hit of 2014 — is that the people with whom I shared a theater-row were extremely friendly. They generously offered me some of their snacks and provided lively banter prior to the start of the film. Unlike me, they clearly enjoyed themselves during the showing, evident by their vocal affirmations and clapping.

When the credits rolled, the husband leaned over and asked me my thoughts. “You don’t want to know,” I replied. I wasn’t about to spoil their evening. They looked like they had a good time.

Thankfully, I have a platform on which I expound. God’s Not Dead: We the People is not merely the worst in an already-misbegotten series, but so utterly deplorable that its status as a three-night-only Fathom Event in theaters at least assures that significantly fewer people will see it. At one point, a character justifies homeschooling their child because it “protects them from receiving some immunizations.” This is the hellscape in which we live.

I’ll catch you up: all of these films focus on the absence of Christianity from public education in America. God’s Not Dead: We the People decides to waste its energy on a nonexistent issue: the governmental infringement on homeschooling. I thought I was missing something. I did my do-diligence and spent some time researching, and I can confirm that homeschooling is a matter unto the individual states. Some states even go as far as to support parents who do it via benefits for those raising a child on their own. I couldn’t find any credible sources that suggested a Congressional attack on the practice occurring at this time. Don’t tell screenwriter Tommy Blaze such a thing. He might have to go back to the drawing board and conjure up a narrative not based solely out of an illegitimate fear.

The paper-thin plot revolves around Reverend Dave (David A.R. White, the only actor to appear in all four movies) once again playing the savior role, this time for homeschooled parents. Specifically, Rebecca and Mike McKinnon (Francesca Battistelli and Antonio Sabato, Jr.), who receive a visit from a local government worker one morning. She’s come to monitor their small little class right as Dave is reading Bible verses as part of their theology lesson. Naturally, she doesn’t like what she sees, and the McKinnons are issued a lengthy letter that demands they comply 100% with homeschool regulations or they face a daily fine of $1,000.

Of all the things to draw ire in this outrage climate in which we live, homeschooling regulations don’t appear to be very high on the list. Moreover, of course it’s not the curriculum the students are being taught that sticks in the craw of these villainized social workers and judges. It’s Christianity. Overtime, Reverend Dave hears from several parents who have received similar visits and subsequent threats. He decides to spearhead a landmark congressional hearing in Washington, D.C., eventually going toe-to-toe with Judge Robert Benson (William Forsythe), whose marquee personality trait is abolishing religious freedom because what else would it be?

In a time when Muslims face senseless cruelty just going about their day-to-day lives and Jewish people see their temples defaced with anti-Semitic slurs, the God’s Not Dead franchise reminds us that the dominant religion in America by a country mile is under the greatest attack. Anyone who isn’t an active Bible-gripper is portrayed in the most broadly caricatured manner. Moreover, those who are the protagonists in We the People — specifically the minority characters — exist to spew pro-America/pro-Christian dialog. The Asian character Martin (Paul Kwo) is the most gratuitous.

Martin only turns up when the film needs someone to wax poetic about the virtues of America from an immigrant point-of-view; in the most jingoistic ways as well. Then, he’s promptly discarded. At one point, he actually utters the line, “the Constitution is an awesome document.” You could believe he sits at home and stares at the American flag in his spare time, reciting the preamble of the Declaration of Independence by memory because that’s frankly in-line with this film’s logic.

While it might’ve been my theater’s problem with the masking, the film also feels like it was shot in close-ups. Harold Cronk at least brought a theatricality to the first two installments, and its sorely lacked since his departure as director. Throughout We the People, I felt too close to the characters simply by way of their towering stature on the screen. Vance Null’s shots appeared to be zoomed-in, providing a surreal quality to a film I wish I could’ve rewound at times just to make sure I was actually hearing the nonsensical dialog I thought I was.

Where is the entertainment value in a film like this? God’s Not Dead: We the People is made for those who waste their precious hours of the day on cable news (Fox News) intake. The elder generation of people who may indeed live healthier, more fruitful lives than the next would rather spend their time living in a fearful state-of-mind than cherishing their remaining years. Furthermore, there’s nothing engaging about a slew of actors reciting political diatribes to one another whilst fighting a battle against homeschooling that — like people putting marijuana in Halloween candy or committing voter fraud for funsies — simply does not exist.

There is no movement to end homeschooling, nor is there a movement to abolish Christian homeschooling, religious public schools, nor places for like-minded believers to worship in the United States. It doesn’t matter. The fear of government infringement on such civil liberties will persist so long as films like God’s Not Dead continue to be made. The fact that this series has gone from being a sleeper success to barely worthy of a theatrical release is a step in the right direction in quelling the fires predicated upon flimsy foundations. But it doesn’t change one simple fact: God’s Not Dead: We the People is a repugnant film to its very core.

NOTE: God’s Not Dead: We the People runs in limited theatrical engagement from October 4th – 6th, 2021.

NOTE II: In an effort to bring you some actual facts on homeschooling, I present you two separate Twitter threads from two individuals who work for the Coalition for Responsible Home Education. They took to social media to confirm that their organization was never contacted about their representation in the movie, and how their portrayal here is grossly misrepresented. You can read them here and here.

That’s your opinion. And it’s great that our constitution allows you to have one. What I thought this movie pointed out was the potential slippery slope that the way our society is going we will not have the rights that we have now, like freedoms to express how we feel about movies. I loved this movie

Thanks for letting us know that YOU are for the socialist agenda by your aggressive counteraction and slandering accusations of those who you deem not worthy of an audience in their personal stances. I’m grateful for a time in this nation where socialist agendas and those who push them are revealed and out in the open and OBVIOUS by their political agenda towards those who are promoting FREEDOM. Thanks for letting us know you are on that list so we can be confident in BOYCOTTING you and your agenda. Heads up Americans. It’s in our power, as WE THE PEOPLE, to DE platform those who are tearing down those who are trying to build up this nation….don’t forget Steve Pulaski on that BOYCOTT list.