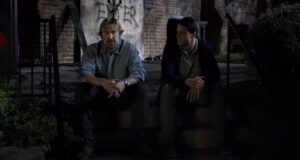 The Easter-weekend release of God’s Not Dead: A Light in Darkness completes a trifecta of faith-based films at most multiplexes, the likes of which unseen since the first film of this respective franchise, Heaven is for Real, and Son of God all desperately tried to court the Christian audience during the spring of 2014. Standing on the outskirts as the film intent on doing the most proselytizing, the third installment of the God’s Not Dead series is nowhere near as efficient of a film as I Can Only Imagine nor as respectably misguided as Paul, Apostle of Christ. It’s the dying breath of a franchise that’s misrepresentation of Friedrich Nietzsche’s famous quote has now culminated in another laughably overblown film for those who, in all their hearts, believe that the Christian faith is under attack.

At a time where antisemitism is running rampant and one only needs to do a Google search to see countless Muslim individuals whom have been attacked and murdered for peacefully exercising their faith, God’s Not Dead: A Light in Darkness argues that an unhinged pastor whose controversial church lies on the grounds of a public university and faces demolition is the real victim of an intolerant world. While at the very least willing to acknowledge valid criticisms levied at the Christian church over the last decade — such as media opposition, low millennial representation, and the persistent persecution complex, on which this film is predicated — this installment offers little else besides oversimplified rebuttals as opposed to discourse. Assuming this is the conclusion of a trilogy, if I have to hear that godforsaken Newsboys song again, Hell is going to witness a new kind of fury.

The original God’s Not Dead focused on Shane Harper’s Josh, a college student retaliating against his atheist philosophy professor who proclaimed on the first day of class that God was a fictitious being. The only solace Josh could find was from Pastor Dave Hill, played by David A. R. White, who was all but absent from the first sequel, until a post-credits scene shown him being arrested for refusing to turn over transcripts of his sermons to the government. A Light in Darkness picks up at that moment, with Dave sitting in jail before being bailed out by his partner, Jude (Benjamin Onyango, reprising his role as well). Shortly after being free, Dave’s church is inadvertently set ablaze by Adam (Mike C. Manning). Jude is killed and Dave now has another host of problems on his hands. On top of his church being in ruins, the college’s board of directors wants the multi-generational safe haven demolished. Dave has no choice but to drive up to Chicago to visit his non-believer lawyer brother, Peace (John Corbett in a halfway decent performance), and try to get him to help fight this case.

There’s also Keaton (Samantha Boscarino), Adam’s girlfriend, who breaks up with him before his impulsive actions lead to Dave’s church being burned. Keaton’s story is one of a young person struggling to hear a response from God in a time of unimaginable unrest. She prays and prays, but gets no satisfying answer, despite vocally begging her maker to privilege her some type of audible. It’s like she’s expecting God to slide in her DM’s late one night. “Keaton,” He might write, “you up? It’s me… God.”

Like its predecessor, which followed the overblown courtroom theatrics that ensued following an AP History teacher’s casual response to a student’s religion-related question, A Light in Darkness makes a mountain out of a molehill in terms of where it goes with its main plot-thread. It shovels away at the smallest possible “what if,” exacerbating the tired persecution complex of its target audience through simple-minded positioning and red herrings that run amok in writer/director Michael Mason’s contrived screenplay. When it does address aforementioned issues plaguing the church in the modern day, it does its best to sweep them back under the rug as if to unintentionally confirm any feelings of skepticism. The most obvious example comes when Keaton tells Dave that one of the reasons young people have dismissed the Christian church is because “it’s getting a lot easier to tell what the church is against rather than what it’s for.” Although there are many arguable reasons for Keaton’s claim, this one couldn’t be more truthful, but Pastor Dave waves it off as if it’s an easy fix, directly proving how out of touch today’s pastors have become when speaking to those they should be courting as their next suckers, er, members.

Throw in the usual abundance of “celebrity” cameos — this time, NRA mouthpiece Dana Loesch and Fox News loudmouth Judge Jeanine Pirro — that have kept the paratext of this series relevant since its inception, and a fuzzy reading of the law that does its part to undermine the concept of eminent domain, and God’s Not Dead: A Light in Darkness conducts business as usual. Ironically, one of the main points of the film, which comes in the third act from Loesch of all people, is that America has gotten itself into political trouble recently because “both sides are yelling and no one is listening.” I couldn’t agree more. Riddle me this, however: what is a chastising series like God’s Not Dead going to do about it? Furthermore, judging by this weekend’s box office numbers (this sequel pulled in $2.6 million from 1,680 theaters versus God’s Not Dead, which took in $9.2 million from 780), is the film’s base even listening anymore?