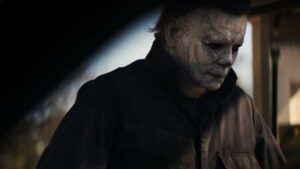 Anyone griping about David Gordon Green’s Halloween not reinventing the wheel can kick rocks for all I care. Even as someone who has learned to be weary of intense festival hype for totally acceptable or downright average horror films such as It Follows and The Witch, even I can admit that this true-to-form sequel to the 1978 classic is a satisfying slasher with strong personality and solid terror. John Carpenter’s score amalgamates both modern strings and classic synths, giving us a decisive mix between the old and the new, and our comically deft trio of writers employ humor in moderation, never undercutting the tension on display. One could call this a crowdpleasing horror film if a certain crowd would learn to be pleased.

While far from perfect and certainly not the most unique slasher film in recent years, Halloween succeeds against itself insofar that for all it bites off, it chews and swallows without ever choking. On top of striving to be the faithful followup Carpenter’s film (which celebrates its 40th birthday this year) never got, it goes for broke in adding depth to Laurie Strode’s psychological state four decades after her original encounter with Michael Myers. From there, it juggles a barrage of characters with strong personalities and, at its core, is helmed by the aforementioned three men who are admittedly out of their element when it comes to making a horror movie (Green’s background includes The Pineapple Express and Eastbound and Down‘s Danny McBride is also a co-writer). The end result is something that deserves more than a participation trophy, and in the end, is thoroughly enjoyable as a long-awaited (decent) sequel and a stand-alone horror film.

The film begins by introducing us to two podcasters (Jefferson Hall and Rhian Rees), who pay a visit to Michael Myers in a mental institution where he’s resided for decades. Under the guidance Dr. Sartain (Haluk Bilginer), a serviceable but incomparable replacement to Dr. Loomis, the two amateurs poke and prod Myers by taunting him by showing him his mask in an attempt to get him to speak. Meanwhile in Haddonfield, Illinois, Laurie Strode (reprised by Jamie Lee Curtis) lives in isolation. She spends her days in a ramshackle gated compound with so many hiding spots and guns, on top of survivalist knowledge, that she’d make Burt Gummer grin at her self-reliance. In her spare-time — and she has plenty of it — she shoots faceless white mannequins to keep her aim up to par, for she believes Michael is making a comeback sooner rather than later. But in the midst of it all, Laurie has alienated her family. Her daughter, Karen (Judy Greer), doesn’t see any reason to talk to her, and has dismissed all her warnings about Michael’s return as total nonsense. However, Karen’s daughter Allyson (Andi Matichak) hungers for a stronger relationship with her grandmother, and that is the strongest dramatic anchor in a film that’s just as much about PTSD and grief as it is about the inevitable body-count.

A painful scene comes when Laurie gets the motivation to leave her home and come see her family for dinner at a restaurant. Shortly after arriving, she gulps down a glass of wine and subsequently has a panic attack that inspires frustration in her daughter and even greater concern in her granddaughter. She can’t help it. Not only is she sick with the mental torment of what happened, but she just knows Michael is set to return. And after a bus taxiing patients from one mental hospital to another crashes on the side of the road, her fears are proven true, and Michael escapes just in time to commemorate his Halloween murder-spree with another one 40 years after it originally took place.

Green, McBride, and co-writer Jeff Fradley impressively handle all the individuals and personalities they make an integral part of Michael’s return. One of the most amusing sequences involves Allyson’s friend, Vicky (Virginia Gardner), who is babysitting Julian, played by a scene-stealing Jibrail Nantambu, a foul-mouthed but amiable little tyrant who is convinced a boogeyman lurks in his dark home. The chemistry both Gardner and Nantambu are capable of enacting in such a small portion of the film is a testament to the strengths of the writers residing in comedy. By contrast, however, one of the film’s most terrifying bits comes shortly after we see the bus carrying the patients has crashed. We discover it along with a young boy traveling with his father, and thanks to a mixture of roadside darkness, the fear of the unknown, and a good emphasis on the emotional and physical vulnerability of a young child whose father leaves to investigate, the scene, the ensuing few minutes wind up being genuinely creepy — and the jump-scares entirely justified and effective.

Yet one of the selling points of Halloween is the return of Laurie Strode, who is played with tremendous conviction by Curtis. There was a time when Jamie Lee Curtis was going to retire; I recall her informally saying it after 2004’s dreadful holiday comedy Christmas with the Kranks. On that note, it’s such a treat to see her back as one of her most memorable roles. Furthermore, it’s not so much that Laurie has been recontextualized as a feminine hero/survivor as much as the modern times have trained us to look deeper into a character who is the epitome of strength. Even Curtis stated in a recent interview that Laurie was an assault victim, and it’s frightening to think that she “probably went to school the next day” after her first encounter with Michael. Here, we see what years of torment and instability have made her: someone shaken, a little unstable, but never without a plan and a sense of awareness. Curtis crushes what could’ve ultimately been a weak, extended cameo.

David Gordon Green has directed a myriad of different movies. He began humbly, directing quietly moving and inspiring little indies such as George Washington and All the Real Girls before tackling stoner comedies like The Pineapple Express and Your Highness, rural dramas like Joe, serene character pieces like Prince Avalanche, with Paul Rudd and Emile Hirsch and Manglehorn, starring Al Pacino, and most recently, laudable redemptive biopics like Stronger. Segwaying into horror, Green shows his versatility extends even beyond what we’ve already seen, as he carefully crafts a film that succeeds in distilling the hallmarks of Carpenter’s original and incorporating them into this film. His Halloween remakes that spooky atmosphere, and while nothing will ever match what we say it will never match, this film nonetheless is visually pretty impressive.

Don’t let the saturation of remakes and reboots of horror franchises, let alone the disorienting number of Michael Myers movies, distract you from how good and successful Green’s Halloween is. For a film attempting to serve as the “true” follow-up to one of the genre’s best films ever, on top of prioritizing various other, tricky inclusions, it’s still capable of instilling unease into all of us, even beyond spooky season.

My review of Halloween Kills