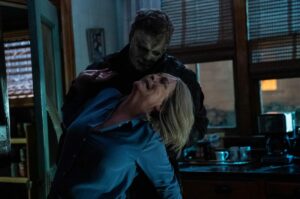 Some are going to be pissed off with the narrative direction Halloween Ends takes. The reaction might be akin to that of Halloween III: Season of the Witch upon its release. As someone who has seen enough slasher movies for two lifetimes, I’m supremely grateful the writers went for something totally original. The concluding chapter of this trilogy feels like a David Gordon Green movie at heart: the best thing I can say for a series that’s vision feels complete and thrilling — and downright brutal.

Following a shocking opening sequence, Halloween Ends picks up several years after the events of Halloween (2018) and Halloween Kills. Michael Myers is nowhere to be found, but the town of Haddonfield, Illinois is battered, bruised, and irreparably scarred. Again. The only thing more shocking than the first ten minutes of the film is that Laurie Strode (Jamie Lee Curtis) is stable, even happy. She’s back to living on the grid with her granddaughter, Allyson (Andi Matichak), and in the middle of writing a cathartic memoir. The town of Haddonfield has shifted course to taking their anger out on a young man named Corey Cunningham (Rohan Campbell), who was involved in a tragedy of his own that’s left him wracked with guilt. It’s Laurie who rescues him from a group of bullies — marching band bullies at that! — and sends his wounded self to Allyson, who now works at a hospital. The two recognize the trauma they both have spent their young lives enduring, and begin a relationship.

Unlike Allyson, however, Corey is seeking a vindictive and violent path forward, which leads him into the bowels of Haddonfield to confront the town’s demon head-on.

Green’s proclivity for stories about helpless characters living in a hopeless, forgotten enclave in America comes to life in Halloween Ends. This is a bold follow-up to a movie that spent much of its runtime penetrating the fragile, damaged psyches of so many residents in Haddonfield. Where Halloween Kills went broad, Halloween Ends narrows its focus on Corey and Allyson. While Corey’s presence does come precariously close to undermining the growth and resilience demonstrated by Laurie’s granddaughter, his arc is juicy enough to warrant the belated introduction. He’s a frightening illustration of what happens to an innocent person when society wants nothing more than to see them dead or behind bars.

But even as the film remains tightly focused on the new generation of troubled Haddonfielders, Jamie Lee Curtis is still afforded time to shine. Writers Green, Danny McBride, Chris Bernier, and Paul Brad Logan (who penned the novelization) are thoughtful in their portrayal of Laurie’s self-redemption tour. Laure is her old instinctive and calculated self; the same person we fell in love with over 40 years ago. Series mainstays Green and McBride were wise to disregard all other entries after the 1978 film, and give the long-standing, shared face of this franchise a storyline for which reemerging felt right.

All three of these films have been distinctly different in tone and approach. The 2018 film focused on trauma and the trio of Strode women as troubled individuals. Last year’s sequel panned out further, showing the dangers of (lynch) mob mentality and a town so disgusted by lackadaisical law enforcement that they recklessly took matters into their own hands (sound familiar?). Halloween Ends tightens its focus once more, positing two societal outcasts in a delightfully humanistic way that transcends slasher formula.

You don’t have to love the approach Green and company took for this series. But you have to respect the fact that Blumhouse allowed their vision to be fully realized. Almost every slasher franchise has more bumps than your average country backroad thanks to a revolving door of pedestrian writers/directors starting new plot-threads, leaving others untied, and offering new aspects of world-building. Green did what he does best: afford drama, suspense, and real human emotion into something you’d least expect.

NOTE: Halloween Ends is now playing in theaters and streaming on Peacock.