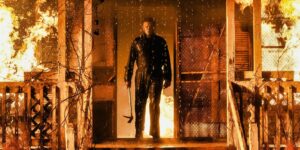 Halloween Kills is sensory overload from the first frame. Not even the Rob Zombie movies were this emotionally stirring; maybe not even as sadistically brutal in their bloodshed. Like his 2018 predecessor, co-writer/director David Gordon Green (working with Danny McBride and Scott Teems) aren’t concerned with cheap fan-service. They lace this follow-up with commentary on the harm of (lynch) mob mentality while adding to the psychological trauma such events would ensue.

Tie it all together with Anthony Michael Hall acting his ass off and the father-and-son duo of John and Cody Carpenter (and Daniel Davies) bodying those familiar yet ghostly synths, and you have a winning sequel.

That’s a lot to chew on right out the gate. Allow me to contextualize. Starting immediately where Halloween left off, Halloween Kills begins with Laurie Strode (Jamie Lee Curtis), her daughter Karen (Judy Greer), and her granddaughter Allyson (Andi Matichack) in the back of a pickup truck en route to the hospital. Laurie is badly injured following a standoff with Michael Myers that supposedly saw him burned alive. But we know that’s false hope.

Instead, Michael emerges from the burning fort and slaughters a plethora of first responders. Green establishes early on, through Myers’ use of a battle-axe, a knife, and a buzz-saw, that this will be an uncommonly bloody endeavor. You might have an inkling of what you’re getting into, but let it be known: this is a film littered with gruesome decapitations, eye-gouging, neck-snapping, bone-breaking, and a hell of a lot of stabs. Even the seasoned horror vets might close their eyes at times.

Back to the story: Green brings back a handful of characters from the original Halloween: including Lindsey (Kyle Richards reprising her role), the little girl Laurie babysat; Tommy Doyle (Hall); and Marion (Nancy Stephens), now a nurse. Where Green’s Halloween intently focused on Laurie’s trauma, this sequel provides a glimpse at how it’s impacted others. Where Lindsey and Marion are initially keen on simply remembering the tragedy every October, Tommy gets his wish for vengeance when the TVs at the local bar inform the neighborhood of Haddonfield that a massacre is underway. In practically no time, Tommy is leading an angry mob of citizens who will not stand to see this horror occur again. Dozens of townspeople arm themselves with knives, pitchforks, guns, and baseball bats. “Evil dies tonight!” is their battle-cry.

Allyson sets out with her boyfriend Cameron (Dylan Arnold) while Tommy and Lindsey work together. Meanwhile, Laurie is bed-bound at the hospital, which the mob eventually storms. She braces herself to come face-to-face with Michael. It’s not “if” but “when” in terms of him finding her.

Of all the major horror franchises (Friday the 13th, Nightmare on Elm Street), Halloween sequels have largely been mediocre, especially considering this one is technically #12. While there’s not much characterization you can do with a mute, lurching monster in a mask, Green and company opt to make this installment unflinching in its realism. Laurie being a victim of Michael’s stalking for 53 long years has made her paranoid. Tommy is bitter and wants nothing more than to beat Michael’s brains out. His childhood friends have invisible but no less unhealed scars. Karen is now a widow and Allyson lacks a father. The cops of Haddonfield are made out to be incompetent every time hell breaks loose.

This is a series that has long posited Michael Myers as the insane one. After five decades of trauma, the town of Haddonfield could reasonably be a mental hospital given the pain its people have weathered.

The gravity of these threads comes to a head each time Michael is on-screen, senselessly bludgeoning another victim. As misguided as Tommy’s mob mentality is — and the very real effects of such are shown — it’s no less understandable. Green directs these moments by throwing us right in the middle of anger personified. The rage in the eyes of Hall’s Tommy is deeply felt, as is the horror of Lindsey, who faces a horrific encounter while simply warning a couple children to go back inside. As gratuitous as the bloodshed in Halloween Kills is, Green, McBride, and Teems complement it by remaining cognizant of the real-life horror such catastrophe breeds.

Inevitably, the plethora of characters and ongoing plotlines does catch up with the film. Like Green’s Halloween, you find yourself invested in one thread until an abrupt cut sends you across town to a whole other unfolding plotline. And the cycle repeats, sometimes to frustrating effect. There’s so much going on in Halloween Kills that it might warrant a second viewing to truly appreciate. Rob Zombie’s H2: Halloween II merited the same respect, but for different reasons. I can’t wait for next Halloween, for I’ll do just that and anxiously await the closing chapter to this surprisingly nasty yet satisfying horror trilogy.

NOTE: Halloween Kills is now playing in theaters and streaming on Peacock.