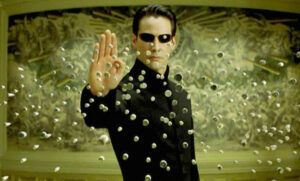 Making a sequel to The Matrix is one of the riskiest things you could do. On one hand is the potential to further captivate an audience that was left mesmerized by the original film. On the other is the chance at further muddying the mythology. Gone is the freshness that came with watching a latex-clad film boast revolutionary “bullet time” sequences coupled with artfully stylish kung fu. Nevertheless, the Wachowskis take their time establishing the stakes. They humanize the sweaty, underground world of Zion before they attempt to dazzle us all over again with CGI wizardry the likes of which still capable of impressing as much as fatiguing.

The sibling directors not only made a sequel, but made two within the same year, released six months apart in 2003, closing the books on one of the most thought-provoking works of contemporary science-fiction — with a uniquely surprising release pattern as the cherry on the sundae.

The Matrix Reloaded, the first sequel, released in May 2003, the more one thinks about it, was destined to be more of a blend of action and philosophical sentiment than its predecessor. While the original Matrix is known for its gravity-bending, slow-motion special effects, The Matrix Reloaded actually makes better and more prolific use of them. There is no subtraction of rich, confusing descriptions about the interworkings of the Matrix itself, but there is also no shortage of some seriously well-choreographed and slickly shot sequences involving car chases and logic-defying action, all of which reminding us why we even showed up for a Matrix sequel in the first place.

We return focus on the same characters. Computer hacker Neo (Keanu Reeves), Trinity (Carrie-Anne Moss), and Morpheus (Laurence Fishburne) receive word that an army of drones are tunneling towards Zion and will reach it within three days. Zion is the location where thousands of escaped humans have taken refuge from the sentinel army in order to avoid having their bodies be harvested as electricity. A subterranean dance-club scene illustrates a moment of carefree debauchery between the denizens. Hundreds of people of all different sizes, shapes, races, and ethnic backgrounds sweat and grind against each other while music blares. Therein, the Wachowskis show what our trio of heroes is fighting for.

With all this about to occur, Commander Lock (Harry Lennix) instructs the teams many Zion ships to prepare for a potentially catastrophic invasion.

Morpheus winds up instructing one specific ship, led by Oracle (Gloria Foster), to remain in the field during the invasion to try to initiate combat. When Neo discovers that Oracle is actually part of the Matrix and could potentially corrupt their own operation to take down the machines, the Oracle simply tells Neo that the choice of trust lies within his hands, the same way it did when he was tasked with either taking the red or blue pill in order to further pursue the world or forget it ever existed. Now, Neo must master martial arts in order to protect the sanctity and security of Zion, all while trying to defeat Agent Smith (Hugo Weaving) and avoid having his own body harvested. Also in tow is the Keymaker (Randall Duk Kim), who can efficiently create digital shortcuts (known as “keys”) that help access different parts of the Matrix.

The Matrix movies operates on mystique and complexities, most of which I’d rather simply accept than challenge. When digging too deep into this series, as with almost anything, you’re bound to find things you either cannot bring yourself to grasp or the fact that deeply penetrating the series’ continuity, chronology, and ideas leave you nothing but exhausted and frustrated.

One intriguing element I didn’t catch during my initial viewing of The Matrix Reloaded is that it has almost no continuity with the cliffhanger on which its predecessor ended. The Matrix concluded with Neo vowing to expose the machines to the ignorant public, as if to “red pill” them and pull back the curtain. That plot is entirely abandoned here. It’s not a huge loss, given the story here is plentiful enough to warrant a sequel, but it’s a curious omission.

Then there’s the freeway sequence, which goes on for an upwards of 15 minutes yet is ceaseless in entertainment value. The Wachowskis know how to direct chaos while maintaining clarity and a sense of space, and it’s shown in immaculate detail here. Where others would favor quicker, choppier cuts, editor Zach Staenberg finds value in the longer-than-average take that ends with two semi-trucks colliding at full force. What ensues before the predictable explosion is a lingering, slow-motion shot of both trailers rippling from the impact, each one heard with terrific sound effects before the inevitable boom. It’s as beautiful as a disaster can be.

The Matrix Reloaded is probably the best sequel any hardened or casual fan of The Matrix could’ve asked for, largely because it respects the series enough to further detail and continue to put well-directed action setpieces at the forefront. While it sometimes muddies its narrative with too much telling and a lot of copious jargon, I suppose that prevents it from being labeled a sequel that is either too similar or too simplistic from the likes of its predecessor.