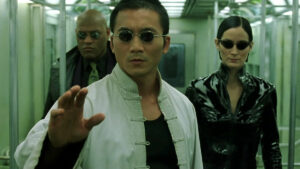 The Matrix‘s best compliment was its release date, coming out at the end of a long and prosperous decade where the technological renaissance in the coming years couldn’t even be fathomed. Showing a dystopian world, essentially controlled and operated by highly intelligent machines seemed as if a Gary Numan song came to life in all aspects: style, sound, and context showing us our dark, doomy future.

The series opened on a high-note and sucked us into a realm in which we couldn’t foresee. In contrast to others, I also found The Matrix Reloaded did a fine job at continuing what the previous film had started. I found the film’s attempts to further the mythology of the original film admirable, the special effects once again complimenting the groundbreaking edge the original propelled, all tethered by the compelling conviction of the three leads.

The Matrix Revolutions, the final chapter in the trilogy, unfortunately stumbles in trying to illustrate just what made many of us embrace this eclectic franchise and anticipate it with a sort of doe-eyed hunger for more. The film takes the logical route by having it largely take place inside the fabled Machines, which seems like the best possible concept. After two films of dabbling into the interior of the towering Machman, it’s almost required that we finally get a look inside them and see their makeup. Neo (Keanu Reeves) decides this is the only way the machines can be defeated and the enslavement of the human race can be stopped, especially after seeing the city of Zion at the mercy of machines and on the verge of completely crumbling.

Much of the same material we’ve seen from The Matrix still exists here. Neo is still taking some of his orders from the wise and experienced Morpheus (Laurence Fishburne), he’s still hungry for Trinity’s (Carrie-Anne Moss) love, and he is confident than infiltrating the Matrix and confronting the elusive Agent Smith (Hugo Weaving) will be the end-all-be-all of the machine rule on humans.

For such a high-stakes premise, it’s shocking to note how much of The Matrix Revolutions inherently feels as if it’s another low-stakes sequel. Much of the mythology and the further developments of The Matrix Reloaded should logically be turned in for epic battles, and maybe a final reminder of how much these characters meant to us by giving us some emotional relevance. Instead, however, much of this finale feels perfunctory. Even Reeves and company feel as if they’ve had enough of the brain-boggling that’s been taking place over the course of now three lengthy films.

The gas has run out, sadly, and that’s evident by this film’s emphasis on chaos and its inability to stop raising the stakes. This is the shortest movie in the trilogy and somehow feels like the longest. The war itself offers very little in suspense, as the main characters are nowhere to be found. During this sequence, I felt as if I was watching a Matrix spinoff due to the inexplicable absence of Neo, and to a larger degree, Morpheus, who has been running this operation from the very beginning. The constant shapeshifting has run its course to the point it feels like those backyard games you played with neighborhood children on otherwise sleepy Sunday afternoons. “I shot you,” one kid would yell. “Yeah, but I blocked it with my invisible forcefield!”

The Matrix films have been cold in their lack of emotion from the jump. It’s been a lacking element when compared to the sheer immensity of the premise, but it’s always been downplayed thanks to the commendable worldbuilding to which the Wachowskis have committed. None of that bothered me up until I realize how much this particular finale would’ve been better had some shred of humanity been worked into its premise. With that, it would’ve been a truly subversive move in contrast to the rest of the series. By this point, we’ve spent three long movies with these characters, and our reward is a CGI-laden battle that overtakes them all. Even when Neo is rendered blind after a confrontation involving a WMD, we just know there will be some resolve that will further bend the rules — despite the event leading to some slickly rendered visuals.

Speaking of visuals, I will give credit to the film’s climax, which involves a showdown between Neo and Agent Smith in the midst of a torrential downpour. You could argue it’s tougher to appreciate in the present, where superhero battles have shown us nearly everything we could ever hope to expect from films boasting a nine-figure budget. Nonetheless, the Wachowskis create a gorgeously morose

But The Matrix Revolutions tries to get by on the same coldness that has long been a staple of the series, and as a result, makes us realize that even if we go through an entire franchise learning little about the characters’ personal lives, we need some reason to feel inclined to care about them. While the film may continue to tantalize us with its wicked special effects and use of slow-motion videography, this time around, much of it feels as if it’s a coverup. An effort to kick dirt over the emptiness of the film’s character development. It’s a weak finale for a compelling franchise to which modern action movies owe a great deal.