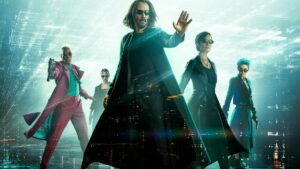 I’m beginning to wonder if the Warner Bros. Serververse we were introduced to in Space Jam: A New Legacy was less of a plot-point and more of a warning of what lies ahead. Thankfully, the fourth installment of the Matrix series is more of a true-to-title “resurrection” as opposed to a so-called “new legacy.” Although The Matrix Resurrections copies its previous sequels’ desire to pile-on the confusion and subject us to prolific technobabble, it retains a heartwarming quality beyond the predictable nostalgia.

While it does evoke grin-inducing memories of past events, it’s clear that Lana Wachowski, working without her sister, Lilly, has spent a lot of time pondering her characters’ futures. Such a return was prompted by the Wachowski sisters losing both their parents, along with a close friend, all within a short time. In Resurrections, the “new” Morpheus, played by Yahya Abdul-Mateen II (Candyman), utters a line that will surely resonate with many: “nothing comforts anxiety like a little nostalgia.” I can believe there were many who revisited the Matrix series amidst this godawful pandemic under those exact pretenses.

With a lot on its mind and little time to waste, The Matrix Resurrections retains focus on Keanu Reeves’ Thomas Anderson, who after waging a war against the machines, has created an enormously popular video game called “The Matrix” some decades later. The game has catapulted him into superstardom, and like any good work, it demands a sequel. In one of several shocking developments, Smith (now played by Jonathan Groff) is his business partner, and their parent company has little interest in new intellectual properties. They want another Matrix as opposed to “the next Matrix.

An externally powerfully scene occurs when Thomas is brainstorming ideas for this new game. A gaggle of loud, sweaty game-developers are prancing around the room demanding the concept switch gamers’ “synaptic ‘WTF’ light on.” “Big, loud, dumb, with lots of guns,” another one shouts out. How ironic of a studio to allow their thought-processes for blockbusters to be so starkly revealed in yet another blockbuster — not that it’s any grave secret, after all.

But like many, Thomas’ elevated status hasn’t made him any happier in life. He sees a therapist (Neil Patrick Harris in a competent dramatic performance), who prescribes him oodles of blue pills to keep him connected to the Matrix’s simulation. One of his few joys in life is visiting a coffeeshop, cutely called “Simulatte,” where if he’s lucky, he catches a glimpse of a familiar face. She’s Tiffany (Carrie-Anne Moss) in the Matrix, but she’s without a doubt Trinity, only this time married to “Chad” (a not-so-subtle jab at the red-pilled Reddit subculture) with two children. Thomas is forced into small-talk with her by a coworker, although he’s at least partly content with letting her live her life unburdened and ignorant of what she once experienced.

Then arrives the aforementioned Morpheus in the restroom of Thomas’ office. He pulls him back into a dark underbelly which will only further complicate his ability to distinguish reality and fiction. There, after all, Thomas is Neo. Thomas initially refuses, setting into motion the first big climactic set-piece where an ensuing explosion sets off the office’s water-sprinklers — a visually attractive callback to the rain-drenched climax in The Matrix Revolutions. A new face appears in the form of Bugs (Jessica Henwick), who does most of the heavy-lifting in reintroducing Neo into life outside of the Matrix.

The first half of Resurrections is markedly stronger than the first. It marches to the beat of The Force Awakens on one hand, reacquainting us to this setting by way of flashbacks and thematic similarities. What it truly excels at is always keeping the relationship of Neo and Trinity within arm’s reach. The best scene comes in the first act, when the two are having espressos and chatting with pained, wistful expressions. She can’t shake the fact that he’s so familiar. He’s practically biting his lip in resisting ruining her manicured life. It’s the kind of poignant confrontation of reality we’re all due for some day. It’s an exercise in empathy to see these two troubled souls battling the same problems we mere mortals face almost daily.

Resurrections is Lana’s New Nightmare, however, as she and cowriters David Mitchell and Aleksandar Hemon pivot from what we’ve come to know about how machines interact with humans and what ultimately became of Zion. Admittedly, few are developed enough to be truly satisfying. That’s the problem with these lofty science-fiction franchises that have laid dormant for an extended period of time. The comeback “legacyquel” is too often chock-full of ideas it can’t possibly explore in detail, and so much is yet again dedicated to reintroduction that it’s as if we have to wait for yet another installment to get what we wanted from the one we’re presently watching.

I’m still not quite sure of the specifics that justify Morpheus’ return as a new, younger counterpart, nor am I terribly interested in deciphering all the intricacies of a world that’s grown larger than even the Wachowskis could’ve imagined back in the late 1990s. That said, Groff does fine work replacing Hugo Weaving, right down to his clenched-jaw way of speaking.

However, I still can’t shake the fact that Wachowski and company made so much of Resurrections about criticizing Hollywood’s “Sequel Industrial Complex,” as I’ve referred to it. In one messy shootout, an old characters blasts the state of art and fandom through broken English while Neo and Smith square off. It’s a corny bit of chaos, yet it’s piercing in its accuracy.

It’s worth noting that Reeves and Moss are very strong in slipping back into their roles. While Reeves appears to be at his most comfortable in playing Neo, it’s Moss who leaves her mark (even if the writing sidelines her a little bit more than it should). Both actors look amazing for their ages (Reeves is 57, Moss is 54), and their characters permeate all the emotional vulnerability we’d expect despite significant time removed from such harrowing experiences. Therein lies the humanity that has made The Matrix not only a cut above copious sci-fi efforts, but a world-class series, flaws and all.

NOTE: The Matrix Resurrections is now playing in theaters and is the final film to be released simultaneously on HBO Max for 31 days.