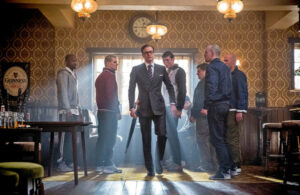 In the IP-saturated, comic-book crazy economy in which we reside, it’s desperately difficult to start a new film franchise. Perhaps it’s even more difficult when it’s an adaptation of a cult-favorite comic-book that is still fertile in its existence and doesn’t have the generational adulation on which the likes of Marvel and DC run. But when something is as good as Kingsman: The Secret Service — a film that starts strong and rarely lets up in suspense and unadulterated fun — I pay attention. And I’m thrilled audiences have too.

I remember the very first trailer for Kingsman being rather unremarkable in the way; it appeared like another flimsy work of the spy genre. However, when a release date of October 2014 was pushed back to February 2015, and the trailers began to become more prolific, it seemed that the marketing team behind the film started to deal with it in an entirely new sense. The trailers became a riot, showing so much craziness that one wondered what would be left to show in the actual film. I went from a generally dismissive attitude to genuinely being excited for, what I saw, a something totally new and fresh.

Kingsman is exactly that: a film that slaughters convention and any and all expectations to create something completely unpredictable, zealous, and most importantly, highly enjoyable. The film opens by showing a mission in the Middle East, carried out by the honorable Kingsman, an elite spy organization. We see a Secret Agent by the name of Harry Hart (Colin Firth) try his best but fail to save the life of one of his fellow agents, leading him to deliver a medal of bravery to the man’s widow and young son. He tells the son, Eggsy, that if they ever need any assistance to call the phone number on the back of the medal and state a special message.

17 years later, another Kingsman has fallen, leaving the organization questioning how to proceed against Richmond Valentine (Samuel L. Jackson), a wealthy inventor who is dolling out free cell phone service in efforts to control the population. By his side at all times is henchwoman Gazelle (Sofia Boutella), equipped with prosthetic legs ending in flat metal clodhoppers with a spike made to impale. Eggsy lives in London with his mother and abusive stepfather, and is arrested after stealing a thug’s car at a local pub with some friends. He uses his sole phone call in prison to call the number on the back of the medal given to him as a child. He’s bailed out by Harry, who recruits him to the secret service agency in efforts to stop Valentine and company.

The Kingsmen use a variety of sophisticated weaponry and fighting styles that would normally leave the untrained aggressor crippled and sore for weeks. Harry, however, is not an untrained aggressor, using suave tactics to brutalize his enemies or instigators and assure that justice be served in a fair manner. He takes Eggsy as his prodigy, showing him the ropes of a Kingsman and what it means to work for the organization, as it’s more than just umbrella guns, knives that propel out of dress shoes, and inconspicuous grenades.

Obviously, Kingsman is a blatant parody of the Bond franchise, but it is so in the best possible manner. Rather than lazily parodying character names, mannerisms, and proposing direct references to films of the franchise, writers Jane Goldman and director Matthew Vaughn (X-Men: First Class) lampoon style, which will always bear a greater longevity than mindless name-calling. The key to the art of parody is in style and convention, which Goldman and Vaughn understand from the get-go. What results is an uproariously fun film that never runs out of energy and always provides something fresh in a currently overcrowded pool.

Because Goldman and Vaughn aren’t hellbent on walking firmly within the footprints of Bond, they establish something of their own. Kingsman isn’t bogged down by the weight of its own premise. It permits excessive humor into its premise, both of the low-brow and high-brow variety. Firth is stoic, but we can tell he’s having fun. Egerton is a perfect young counterpart with the rugged edge. One gets the sense if he were American, he’d join a street-gang like the Jets.

Kingsman wisely comes amidst a time where the superhero genre and the spy/espionage genre are in their primes, but it never adheres too much to one particular side, creating a joyful hybrid. In what looks to be a big year for the superhero/action genre, Kingsman provides those experiencing fatigue and dissatisfaction from the ubiquity of such projects with a pleasant sense of originality and style that could’ve easily been just another example of muchness in a genre.

The film is likely to play nicely, with generally little competition in the same vein and an obvious push towards communities like Reddit, who will embrace the material for its simultaneous slickness and uniqueness. Moreover, the film plays nicely for people simply looking for a cinematic experience that appears to have a pulse after a month of general ho-hum and mediocre releases. There’s an unabashed level of excitement the film bears during a time of unimpressive titles that will undoubtedly find ways to cheer up a crowd that has long been done a disservice so far this year.