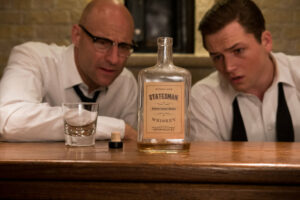 When Kingsman: The Secret Service was released back in February 2015, on the same weekend as Fifty Shades of Grey in an obvious attempt at counter-programming, I was already assuming it was going to be a financial failure — but at least an original one. It was a nearly $100 million movie with little brand-recognition in America and an off-kilter approach to go with its sensory annihilating marketing campaign.

Low and behold, I was (proudly) wrong. I loved it and so did many others who saw it and pushed the film’s global earnings to over $400 million. It was an electric shock of a movie, not miles away from the superhero films we’ve come to love over the last several years, but just distant enough where it was something different and demanded attention. A sequel was only a matter of time, and I report back in mostly positive spirits that Kingsman: The Golden Circle shares more in common with 22 Jump Street than The Hangover: Part II.

Sure, those are raunchy comedies, and this is a full-fledged action movie, but both of those aforementioned films tried to get away with regurgitating the same concept twice. Only one succeeded. Kingsman: The Golden Circle‘s lack of freshness and innovation isn’t because it’s flawed, but because we’ve seen it before. Just as well, screenwriters Matthew Vaughn (who returns as the director) and Jane Goldman manifest certain growth in this sequel, which ultimately saves it from succumbing to an action film that assaults with its main arsenal too early and too prolifically.

We are reacquainted with Eggsy (Taron Egerton) and Merlin (Mark Strong), two of the surviving members of Kingsman, still humbly mourning the loss of Harry Hart (Colin Firth), their leader, from the battle with Richmond Valentine a year ago. Eggsy is on the fence about marrying his devoted girlfriend, and puts all thought of it on hold after a recent ambush from a rejected Kingsman applicant results in the complete destruction of Kingsman’s headquarters.

Eggsy and Merlin find solace in an emergency bottle of Statesman Whiskey. After finding a sign at the bottom of the bottle, they travel to the Kentucky distillery where they meet Agent Tequila (Channing Tatum) and the distillery’s owner, Agent Champagne (Jeff Bridges). Statesman is not far removed from Kingsman, only they don’t pose as a high-end clothing shop. It’s there, Eggsy and Merlin discover that Harry survived from the gunshot, which instead obliterated his left eye and his immediate revival on behalf of the Statesman agents left him with retroactive amnesia.

The antagonistic forces, this time around, come from Poppy Adams (Julianne Moore), a woman operating a drug cartel in the far-off, uncharted regions of Cambodia. There, she has built a 1950s-esque life for herself, complete with a diner, a movie theater, and more. She’s kidnapped Elton John and carries out her plan to infect millions of drug-users with recreational narcotics that result in mania, paralysis, and eventually death, prompting Eggsy, Merlin, and Agent Whiskey (Pedro Pascal) to obtain Poppy’s antidote to save those infected.

Only a madman could’ve assembled such a cockamamie premise and then assemble an ensemble cast of champions. Casting Moore as a devilishly compelling villain, rejoicing in her ability to be both playful and maniacal in the same role, is just a power-move. Egerton and Strong carry the same charismatic weight, as does Firth, who, even in a total daze with complete memory loss, abides by the age-old Kingsman ideology that “manners maketh man.” While it would’ve been nice to see Channing Tatum be the trio’s sidekick instead of rendering him unconscious in a cryogenic tanning-bed for much of the film, it’s nice to see Narcos‘ Pascal get some more worthwhile screentime. It’s also hard to go wrong with cameo appearances from Bruce Greenwood — as the President of the United States to boot — and Halle Berry as Agent Ginger Ale of the Statesmen.

Kingsman: The Golden Circle does admittedly put a lot of undue pressure on the charismatic performers, arsenal of endless weaponry and accouterments, and a splendid wink-and-a-nudge political subtext. However, it functions because of such is what makes it noteworthy. Pacing issues and being narratively overstuffed inhibit its ability to be appreciated in the sense that it is a cleanly made film. Much of the slickness, as with the first one, will inevitably wear off for many and they’ll be left with some memorable action moments as well as compelling performances from a host of recognizable faces.

What The Golden Circle does leave behind is a narrative that’s debatably more engaging than its predecessor as well as one that continues to affirm Vaughn’s ability to make the most out of his budgets. Unlike most Marvel films, which look like $200-300 million affairs, with sound, lights, and spectacle to justify their exorbitant price-tags, Vaughn and company construct a movie that, not dissimilar from War for the Planet of the Apes, makes conservative use of its $100 million budget. It’s evident a disproportionate percent of the film’s funds went to a particular scene. I’d guess the climactic scene wasn’t much more expensive than the opener and the imprisonment sequences of the drug-users combined. If anything, a good chunk of the budget justifiably went to constructing and coloring Poppy’s lair, which in that case was money well-spent because it’s unlike anything else we’ve seen as of late.

Kingsman is also beginning to suffer from what I call “superhero syndrome,” or the disassociation one begins to feel watching superhuman characters zip through the air, avoiding danger or death by a nanosecond. Such predictabilities inherently rob the situation — and even the film — of the depth of concern for the characters’ well-being. I’d make the argument Spider-Man: Homecoming prompted one to harbor more nervousness regarding Spider-Man’s safety as opposed to any of the Kingsmen here or in the original. Had this sequel been shorter, instead of 141 minutes, which feels like 141 minutes, perhaps this thought wouldn’t have even crossed my mind. The fact that it is currently as long as it is, it prompts more possibility for audiences to realize they don’t care because they don’t have to. They know all will end well.

Be that as it may, Kingsman: The Golden Circle is a blast, and that fact is going to be hard to argue with many fans of the original film looking for a similar outing. The strengths lie in the characters’ retained likability and convictions, as well as Goldman and Vaughn’s sardonic little subtext regarding the government’s lack of empathy, something that’s well-played without being too polarizing. Everyone, regardless of the size of their role, feels committed to character. Everyone looks like they got all dressed up and finally had some place to go, even if that someplace was familiar. The fact that it’s favorable is what makes the difference.

NOTE: If you’re keeping track, Kingsman: The Golden Circle is the fourth film this year to feature John Denver’s music and likeness as a marginally prominent plot-point, joining Alien: Covenant, Okja, and Logan Lucky. Thrice was a coincidence; four times is a conspiracy.