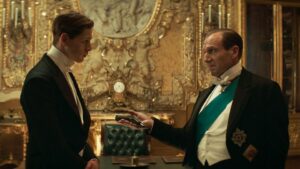 The King’s Man is the most ungentlemanly Kingsman movie yet. Clunkily titled and loosely tethered to the creed of the previous two films, it does an insufficient job at hiding the idea this was likely Matthew Vaughn retrofitting his revisionist WWI actioneer to the framework of this series in order to appease Disney — who does what they do best in making another movie predicated on agonizingly slow worldbuilding.

That’s not the only issue, however. The gusto of this series has ostensibly been lost, seeing as The King’s Man has shifted release dates seven times (a third can’t even be blamed on the pandemic). Furthermore, the ensuing prequel is a tonal mess that can’t decide whether it wants to fit into the snarky framework of its series or opt to be 1917. The Kingsman franchise has established a reason to exist thanks to its light-hearted take on the spy genre with principled characters and kinetic combat setpieces that merge a plethora of styles.

Given the lack of buzz surrounding this installment, I fear this might be the last. It would be a damn shame for Vaughn’s series to go out like this.

The film opens in 1902 South Africa, long before Eggsy and Harry’s parents were even in the picture. Ralph Fiennes is Orlando Oxford, a man of nobility and privilege, who has committed to a life of working alongside his wife in aiding impoverished African villages. His wife dies on an otherwise routine visit to a concentration camp, leaving him and his son Conrad (Harris Dickinson) to fend for themselves. With World War I heating up, Conrad goes off to fight for his country. Around the same time, Grigori Rasputin (Rhys Ifans) is encroaching on Russian Emperor King George V’s (Tom Hollander) power, which prompts the ruler to call upon Oxford to take out the infamous mystic.

Oxford tries to get Conrad to rethink his decision by showing him a comprehensive network of servants he has assembled in order to keep tabs on world leaders. Conrad is unfazed and decides to take the road traveled more often by folks with fewer options, leaving his father to try and handle a messy web of powerful evildoers himself.

I spend way too much time on Wikipedia, let alone the internet, and one of my fascinations amidst this godforsaken pandemic was with Rasputin himself. You can thank the popular 70s song by Boney M. when it caught fire on TikTok earlier this year. I was elated to see he was a character portrayed in The King’s Man. I’m happy to report that Ifans does the role enough justice that some studiohead with any kind of notable power should seriously consider a miniseries with his character at the helm. His indelible impact as emperor, mystic, and philanderer is too crazy not to dramatize. Ifans has everything from the lurching presence to eyes that will sear themselves into your soul.

Consequently, I’m rather frustrated to report that Vaughn and co-writer Karl Gajdusek (Oblivion) underutilize Ifans’ Rasputin. The larger movie doesn’t even feature the Boney M. song, instead opting for otherwise interchangeable orchestration when the big fight scene between him, Oxford, and Conrad occurs. One of many missed opportunities in a disappointing film.

Had Rasputin been the sole villain rather than one of a handful, The King’s Man‘s tonal issues might’ve been ironed in an acceptable way. Vaughn and Gajdusek instead want to unpack British colonialism, Oxford’s steadfast pacifism that slowly erodes over time, the morality of a vigilante spy, and showcase the kind of action sequences for which Kingsman is famous all in approximately two hours. It’s a lofty goal especially when roughly 90 minutes of the film is droning, bleakly shot exposition.

This is the most humorless installment of this series to date. Maybe the absence of screenwriter Jane Goldman is to blame. Either way, The King’s Man doesn’t curate the same breezy thrills coupled with uncouth humor that, say, the first film managed so effectively. Its oppressive seriousness sometimes makes you forget you’re watching something that despite the posturing still isn’t beholden to a substantive historical account. As stalwart as Fiennes is in conveying a character of principle, he doesn’t provide the kind of emotional foundation Colin Firth’s Harry did. Ultimately, he’s left mostly to his own devices, unlike Harry, who at least had a flawed-but-promising pupil to mentor.

The King’s Man is one of those movies that has a climax riveting enough that it almost makes you forget the extremely flawed foundation on which its built. The final 30 minutes take place on a towering island that begins with Oxford stuck in the middle of an aircraft’s wing, which leads to him caught on the side of a ridge surrounded by rams. It’s a thrilling sequence that reminds you what this series has long been about. It’s not that this prequel needed someone like Elton John to elevate it into relevancy. It’s that the previous film, The Golden Circle, left on such a promising happy ending that the only reason to go backwards was if the prospect of going forward seemed undesirable.

Low and behold, we got what is essentially Tremors 4, and I really didn’t want to make that kind of reference again.

NOTE: The King’s Man is now playing exclusively in theaters.