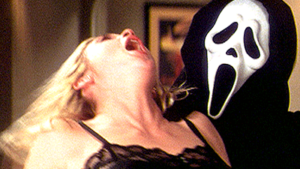 Horror had become a barren wasteland of schlocky sequels and derivative slashers by the 1990s. Then Wes Craven — who helped create the slasher genre — came roaring back with another defining work that showed his finger never left the pulse of what solidified his legend.

Scream works for a number of reasons. It starts with a roughly 12-minute prologue that introduces us to Casey (Drew Barrymore), an innocent all-American girl who is making Jiffy Pop in the kitchen before settling into watch a movie. The phone rings. A mysterious voice is on the other end. Initially, she thinks it’s a simple wrong number. Then he initiates a game, asking what her favorite scary movie is. Casey hangs up, he calls back. Over and over again. “What do you want?” she says in a panic. “To see your insides.” Minutes later, both Casey and her boyfriend (who stopped by on the wrong day) are torn open.

The double murder sends an otherwise sleepy town into a panic. The killer’s real target, however, is Sidney Prescott (Neve Campbell), whose been haunted by the rape-and-murder of her mother ever since it occurred a year ago. Meanwhile, her boyfriend, Billy (Skeet Ulrich), is arrested. Her friends (Rose McGowan, Matthew Lillard) are breathless in speculating who the killer might be. Another peer named Randy (Jamie Kennedy) is obsessed with horror movies, and believes he has everything figured out from the get-go. Then a persistent tabloid journalist (Courteney Cox) partners with a young cop named Dewey (David Arquette) in order to get the scoop from Sidney herself.

It’s Randy who claims that there is a “very simple formula” to horror movies. He recites his theory as a group gathers to watch Halloween on television. “Never have sex, never drink or do drugs, and never say ‘I’ll be right back.'” This occurs during one of Scream‘s best scenes. Little do the characters know, while they all watch Jamie Lee Curtis’ Laurie duck and dodge Michael Myers, the killer — donning a ghost-mask and a black coat — is lurking in the house, specifically the garage. While the TV shows Myers approaching Laurie from behind, “Ghostface,” as he would become known, sneaks up on Randy, who is screaming at the screen. “Look behind you!” Every horror movie smart-ass would be wise to heed their own advice from time-to-time.

Craven and screenwriter Kevin Williamson are crafty in their spin on horror clichés, even if they’re guilty of name-dropping more than your average hip-hop album. The downside to this, by default, is the light-hearted nature does undermine some of Scream‘s horror elements. We’re never too unnerved because the pervasive incorporation of humor doesn’t permit us to be. The opening sequence with Casey works so well because we don’t know what we’re in for, exactly. By the time the plot intensifies, some of the ominousness has worn off in pursuit of chuckles.

Where Craven and Williamson wisely pivot is in how they handle the third act. They take aim at a culture quick to blame violent movies (or, given this “Columbine” era) as opposed to coming to the realization that real-world violence, both physical and sexual, only exists because of very real hatred. Good movies of this breed create an hour and a half of fun with some memorable lines and kills. Great, even iconic, movies of a generation address some larger ideas. Scream subscribes to the latter, and eases its shortcomings because of it.

Sidenote: consider the subtle snark of a television set falling on top of a character’s head, killing him by blunt-force trauma and electrocution. That’s one instance where you can, maybe off-handedly, blame a movie for a death.

It’s worth noting that a lion’s weight of this material probably wouldn’t have functioned without such a strong roster of actors transcending the types they’ve been tasked to portray. Neve Campbell’s Sidney slowly maturates into a confident woman. David Arquette earns his laughs as a novice, nebbish cop. Rose McGowan’s sass continues to be a trait of envy. Then there’s Matthew Lillard, as over-the-top as possible. A character of this nature wouldn’t necessarily fit in a template like this comfortably for very long. A credit to Craven for utilizing him not only wisely but mining unfiltered wackiness out of an actor who, at that time, had just a handful of credits and little experience with horror.

Scream is still able to hold up after decades of parodies, including a spoof-franchise predicated on mocking the OG mocker of horror tropes. Filmmakers in this realm are lucky to have an era in which they set a standard by making movies essential to the fabric of their genre. Craven had two of those.