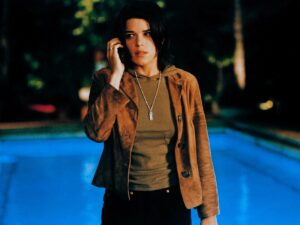 Within the first 30 minutes of Scream 3, we’re treated to a snippet of Creed’s song “What If,” a Jay and Silent Bob cameo, coupled with a reference to Connie Chung/Maury Povich’s relationship, Courteney Cox’s Y2K-era hairdo, and one of the most inexplicable plot-devices in the series thus far — a voice-changer that can mimic the precise cadence of a character’s specific voice.

This film couldn’t be more of its era if it tried.

The rampant tackiness coupled with the dilution of once-game-changing material effectively lessens the overall impact of Scream 3, especially following the franchise’s best installment. It’s a movie that suffers from the absence of one of its founding fathers, screenwriter Kevin Williamson. But to blame the new writer, Ehren Kruger, for all the film’s faults is unfair. The Arlington Road writer was brought in on a whim, had to familiarize himself with the previous scripts and characters, and work off a choppy outline left by Williamson, much of which was reportedly scrapped. That forced director Wes Craven to intervene with rewrites, which led to reshoots, and… it helps explains the mess that is the original conclusion to a trilogy that attempted to cross the finish-line with one flat and three bald tires.

The first major issue is the reduction of time spent with Sidney Prescott (Neve Campbell), who is nearly absent from the film’s first hour. She’s gone on to live on a remote ranch under an assumed name, working as an agent for a crisis call center (one could hardly blame her, but it significantly lessens the intrigue at hand). As a result, much of the film fixates on the dynamic of Gale Weathers (Courteney Cox-Arquette) and Dewey (David Arquette). They’re in Hollywood on the set of “Stab 3,” which shows the fictitious Woodsboro-based franchise was about as successful as Scream was in our world. When suspect-turned-talk-show-host Cotton Weary (Liev Schreiber) and his wife are offed by another Ghostface copycat in the opening prologue, and a photo of Sidney’s mother is left at the crime-scene, that incites fear into the cast that they’re going to be next. And right they are.

Enter a homicide detective named Kincaid (Patrick Dempsey) who wants to bring in Sidney for questioning. But even Ghostface himself has a hard time tracking down her whereabouts. Eventually, however, the group unites in Tinseltown in an attempt to connect the dots of who could possibly be donning the mask and cloak this time around.

Everyone from Campbell to Arquette has the look of fatigue on their faces as they resurrect these characters for a third time. Even Craven merely agreed to direct this because Miramax let him direct his passion project, Music of the Heart (the lone non-thriller in his catalog). It was only a matter of time before Scream and its meta undertones took on the feeling of a Scooby-Doo episode. The cracks in the foundation show themselves not only due to the lack of Sidney for long stretches of time, but the half-baked nature of Kruger’s jabs at horror trilogies.

At one point, a character who was offed in Scream 2 reemerges in the form of a posthumous video diary to be played “should he be killed.” It might seem corny to grill a Scream movie for its incredulous circumstances. This inexplicable scene is so badly introduced, however, that it crosses the line of self-parody in a manner more crude than ever some of the cheaper gags in the previous ones. When the beyond-the-grave character lists his rules for third installments — such as how the characters must find their way back to where it all began — he should’ve added that cinema history has especially been unkind to third installments. After all, that character did mention The Godfather in Scream 2.

The industry-wide effects of Harvey Weinstein do posit Scream 3‘s acknowledgement of sexual assault in Hollywood in a different light. Parker Posey — playing Gale’s character in “Stab 3” — mentions having done some favors in order to secure her spot on the roster. As do other castmembers. The most glaring might be a cameo from Carrie Fisher, who tells of nailing the role of Princess Leia by nailing George Lucas. The fact that such a matter is addressed obviously tells us, especially those on the inside, that we should’ve paid attention a long time ago (or, you know, certain men shouldn’t have crossed such a line in the first place). But moreover, the exposition loaned to Sidney’s mother, Maureen, in the third act casts a different light on her troubled character, who up until this point was ruthlessly shamed for being the town tramp.

As far as it relates to the makeup of Scream 3, it doesn’t much make for a compelling realization that Kruger reveals him to be another relative of one of the character’s. That kind of twist simply doesn’t work a second time. Hell, with further examination, it probably didn’t work very seamlessly in Scream 2, but tantalizing pacing and richly drawn characters made us forgive and/or forget any narrative sins it produced.

Where you could’ve solved the mystery before, and still had fun doing it, there’s no possible way you see the improbable pretzeling act in which this film contorts itself to make its climax make sense. Kruger’s reveal retcons the series to unbelievable lengths, and loans to the idea this sequel was a contractual obligation above everything else.

This is where Scream needed to end, at least for a good stretch of time. If it even needed to go this far at all.