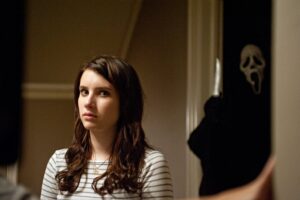 After it blew onto the horror-scene like a hurricane in 1996, helped define pop culture for the latter-half of a colorful and chill decade, and concluded its trilogy all in the span of four years, the best thing for Scream was an extended hiatus. Now, make no mistake: there was no need for a Scream 4 in any capacity. Yet this is Hollywood, which never found a franchise it couldn’t let rest — a trend we thought was appalling in 2011 and are now willing to accept like obedient, IP-hungry seals waiting for the next fish to hurl towards us.

I saw Scream 4 in theaters opening weekend and hadn’t watched it since. I read about two paragraphs of my original review, scoffed at my amateur writing, deleted it, and carried on with my day. Like most of us, I’m a different person 10 years later. With a fifth film just around the corner, it was time to revisit it.

Scream 4 opens by informing us that the “Stab” series of films has become the Saw of the Woodsboro Cinematic Universe, having reached #7. The town itself is approaching the unofficial celebration of the anniversary of the original massacre, something that unnerves Sheriff Dewey Riley (David Arquette) to his very core. Police work around the clock to remove illegally-placed Ghostface masks from light-poles. The new generation doesn’t understand the horror and trauma the murders have inflicted on the town. To them, it’s fodder that makes them a map-dot.

Sidney Prescott (an ageless Neve Campbell), now in her 30s, has returned in time for the event to promote her new self-healing book. She has desperately few family members left, limited to her cousin, Jill (Emma Roberts) and her aunt Kate (Mary McDonnell). Sidney’s return coincides with Ghostface’s reemergence as he targets her and Jill’s friends (Hayden Panettiere, Rory Culkin). They begin receiving the same ominous phone-calls that signal death is a cat-and-mouse chase away.

It’s also worth noting that Gale Weathers (Courteney Cox) has retired from the reporter life. In doing so, she’s faced with a new career path, but still struggles to keep her nose out of current events, especially considering her husband is the sheriff.

Scream 4 has a touch-more personality than its deeply flawed predecessor. Screenwriter Kevin Williamson returns to handle the characters he once lovingly conceived, and the cast has evidently recaptured the joys of playing their most-famous roles after appearing to slum it in Scream 3. The new characters fair nicely too, namely Roberts’ Jill, who is caught between trying to live her life by her own volition while being at the mercy of her understandably protective cousin.

You can credit Williamson and Wes Craven (this serves as his final directorial effort before his death in 2015) for accurately predicting millennials’ obsessive desire to document their entire lives via social media. Sure, it was a fledgling trend in 2011, but the idea of two film-lovers vlogging their every move for a glued audience was still a fertile idea at the time. Impressively, it doesn’t reduce the depictions to corny dialog, where characters utter phrases like “hashtag” but instead operate with a lack of empathy for the victims of the Woodsboro massacre. Gale tries but fails to act as a conduit for the teens. She relates to their nosy natures, yet she tries to make them realize there’s a real world beyond the screen with inescapable consequences. Of course, they don’t listen. But they’ll soon find themselves being fitted for a drawer at the local morgue anyway.

The pervasive problem with Scream 4 is that it tries to attack two targets at once. Scream 3 — despite all its flaws and a screenwriter previously unfamiliar with the series on an intimate level — at least narrowed its focus to the clichés of trilogies. As did the previous two, which targeted the slasher genre and the obligatory sequel, respectfully. Scream 4 is a sequel, but it attacks remakes. And then tries to be something of a remake in the hectically paced final 20 minutes. But it also wants to attack social media/YouTube culture. It’s not that it runs out of ammo; it simply can’t aim straight for very long.

As such, the climax suffers from being too much of anything and everything, all of the time; along with being burdened by dialog and circumstances that make it reek of desperation. Without revealing anything significant, consider the fact that Sidney calls the police as soon as she and Jill encounter Ghostface at their residence. Assuming the events occur as they seem (in relative real-time), it takes 10 minutes for the convoy of police officers, led by Dewey, to arrive. You’d think that the Woodsboro Police Department would’ve beefed up their task force over the years, notwithstanding the fact this is the anniversary of the town’s most heinous crime.

And there will always be something eternally arrogant about a movie pointing out the flaws in other works of its own genre while abiding by them in lockstep — especially when it lacks the tooth of the previous movies that balanced such a call-out in craftier ways.