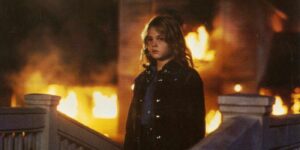 Firestarter is a mélange of odds and ends of the thriller genre, all of which might’ve worked well separately. Some psychic powers here. A little government conspiracy here. Mix in a very underdeveloped father/daughter relationship and you have the fifth adaptation of a Stephen King film released within a year. Following Christine, Cujo, The Dead Zone, and Children of the Corn, the well had evidently run dry and King’s 400-page sci-fi novel from 1980 was the unfortunate victim.

I mean this with no disrespect, but this is what happens when you oust a director with a vision (John Carpenter) after a well-received bomb (The Thing) and go with a gun-for-hire in Mark L. Lester. Carpenter’s eye for distinctive horror visuals and appreciation of cinematic subtext would’ve likely afforded Firestarter more nuance. Instead, we get a smattering of styles, all of which would’ve been handled better either by Carpenter or somebody like Brian De Palma or David Cronenberg — who this film desperately strives to emulate at times.

The fact that, like The Thing, Firestarter merely flirted with the break-even point of its budget is the special irony in this saga.

The film’s focus is on a little girl named Charlie (Drew Barrymore), who can start fires with her mind. Her father (David Keith) was a college student when he participated in an experiment that granted him and his now-wife (a gorgeous Heather Locklear) telepathic abilities. We drop in on the pair as they’re being hunted by a government official (Martin Sheen) and an organization referred to as “the Shop.” Dad wants nothing more than for Charlie to learn to live with her powers. Martin Sheen wants nothing more than to use them for evil.

Firestarter is stuffed to the gills with performers who suggest this material should’ve looked better all around. George C. Scott is the strongest as an Indian doctor who tries to get Charlie to settle in once her and her father have been taken in by the Shop, while Art Carney is a total Reagan-era farmer. Everyone else is oddly stilted. David Keith is perplexingly uncharismatic, and as sad as it is to say, Barrymore is the weak link. Only on her third acting credit at this time, Barrymore needed more coaching with her lines. Again, an established director might’ve helped.

Yet it’s the writing that fails everyone and everything with Firestarter. Barrymore’s acting might’ve improved with some additional coaching, but it wouldn’t have compensated for the fact that nothing about Charlie gives her the impression she’s a believable little girl. I haven’t read King’s novel; I would like to think he didn’t make her the pawn she is here, wayward inside a simultaneously cluttered yet empty narrative. There’s also a serious absence of tension. Charlie is so powerful that as soon as you see her eyes squint, her fists clench, and the screen take on that same look as the immediate air around a roaring campfire, you know what’s about to happen. Not even the Kubrickian-lite interiors of the Shop evoke much fear.

Firestarter is a first-rate concept in search of a personality, gifted only a shred of it thanks to a memorable score by Tangerine Dream. One of the few bits of truly meaningful wisdom I have in life is as follows: “don’t go cheap on a mattress, toilet paper, and if you live in a colder climate, a winter coat.” The same should also apply for directors.

NOTE: As of this writing, Firestarter is streaming on Peacock, just in time for the release of the 2022 remake, directed by Keith Thomas.